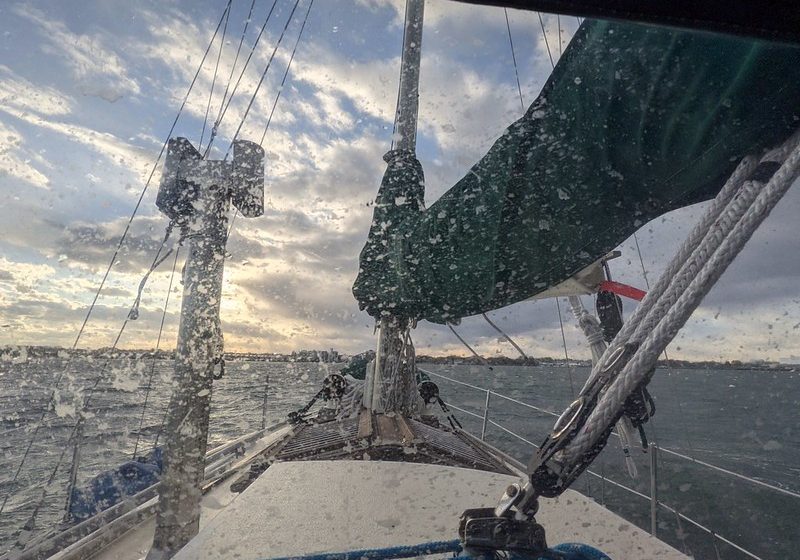 I didn’t build this mushroom anchoring system and I haven’t seen it so all I can do is hope that this (unseen) rig holding us to the bottom of Salem Harbor is somehow capable of keeping our 5,670 kg boat and her crew of three from drifting out to sea.

To be honest with you, I have some trust issues here.

I mean, it only takes one weak link in all the links of a chain to turn my deepest concerns into a harsh reality. I’ve seen how moorings are built and maintained professionally and it sucks, let’s just hope this one isn’t like all the rest.

When Dena scored the gig making grownup money after I got fired from my grownup gig a couple of months ago we decided to avoid the local… er, Officials-of-Concern (OoC) by just paying the fucking money for a seasonal mooring. This way we placate the OoC, have bike parking, a shower and a place to put our dinghy every day. Cool, right?

Right now the wind has been howling through the rig like a mourning mother for almost 72 hours and the chop has been pounding through the nights like a recalcitrant tween on Ritalin …and that’s not easy to say dog-damnit.

The Descension of Events: what is that? I think the first time I heard that phrase I was on a fishing trip with my father off Padre Island, Texas, a million years ago. It was a rented power boat so of course everything that could go wrong went very wrong and it happened in a very logical, although chaotic, way. Not unlike a ballet dancer leaping off stage into a mop bucket and falling down a flight of stairs. It happens because it must.

I won’t bore you with the details of a drunken fishing trip gone wrong. I’ll just say: for example…

So there we were having coffee in the cockpit compliments of Lee Goldenhour and his glorious sunrise.

Afterwords I took Dena ashore in the dink to do her work thing while I went back to the boat to do the daily domestic detail…galley, cat box, cabin sole, ect.

After that I jumped in the dink and headed to shore for a supply/hardware store run.

I knew the wind was supposed to pipe up fresh by the afternoon but, by the time I’d shown up back at the dinghy launch, the entire harbor had a white-cap dressing and the wind was blowing at least 18 knots, steady.

The exit to the marina pinches together with two docks having the same effect as an exit bar with two jetties. It creates a vertical chop during tidal changes, in other words it really sucks twice a day. And it was particularly sucking as I passed through it that day.

Once I got out into the harbor proper the chop was mean but manageable as long as I could deal with getting wet, and I could, so I took the waves as they came. There were a few that were genuinely scary and particularly wet but I didn’t push it and took the waves at an angle so I made a good steady pace all the way back to Cetacea.

I made fast portside aft, hauled my backpack aboard and all was well in the universe.

The little boat was totally full of seawater so I took to bailing. I got about a third of the water out out of the boat when the engine cover got caught in the wind and took off.

Now, I don’t mean the expensive and essential factory, hard plastic, cover. I mean this weird little white soft plastic cover we picked up for ten bucks at the Wickford Marine Exchange a couple years ago. It was a total piece of shit that made the motor look like a little Star Wars Storm Trooper. Yes, it protected the engine and it made us laugh but the only thing I was thinking when the fucking thing took off was: That plastic piece of shit shouldn’t be pollution yet. So I went after it.

The wind had only increased and the chop worsened so by the time I got the little boat started and untied the cover had traveled at least 20 yards on the surface of the water and was picking up speed.

As soon as I got the engine in gear I sat on the bench seat in the middle of the boat and it slipped out of its straps and right out from under me. I was sucked into waist deep ice water almost instantly. I gasped but I had my eyes on my escaped Storm-Trooper helmet and there was nothing gonna stop me from saving it from becoming premature litter, obviously the most important thing in the world, right?!

I got right up next to it and almost fell out of the boat trying to grab it as it sunk when the boat went broadsides to the waves. I got knocked back against the opposite side of the dink and thus began my Descension of Events.

First I tried to roll over to recover, then I kicked the motor sideways with my foot and the throttle went full. The boat took off in a circle and took a huge wave directly on the motor, killing it with a pathetic gurgle.

I instantly became painfully aware of the cold howling wind blowing me out to sea.

I took out one of the paddles (a big deal actually) and started paddling, not rowing mind you, paddling. Without the seat in place, the boat was impossible to row traditionally. So I paddled.

I paddled for about 20 (motherfucking) minutes and got absolutely nowhere.

The boat was at least 50 yards away from me by that point and no matter how hard I paddled I couldn’t get any closer to it.

I could feel myself starting to hyperventilate so I decided to focus on getting the engine running before the wind got any stronger.

The boat was still full of cold water and everything was being tossed around inside it like a sharp toxic soup grinding together to get out.

I pulled myself to my knees and slid to the back of the boat to inspected the motor and actuated all of the valves then went through the starting sequence.

The engine started in one pull. Remember, it was at full throttle when it died and still in gear so the bow of the boat shot in the air and all the water came aft.

Okay, in that instant I came so close to flipping over the transom and watching the little boat drive away from me as I floundered fully clothed I actually lost track of why it didn’t happen.

The reason it didn’t happen: the seat had gotten wedged under my foot and held me in place so I couldn’t fall out. That fucking seat that started the whole chain of events in the first place saved my life!

I situated myself midships in the dink and was back at S/V S.N. Cetacea within fifteen minutes.

The one smart thing I did before I went on my failed Storm Trooper helmet hunting expedition that nearly killed me was leave my backpack with my phone and a nice dry towel in it back at Cetacea.

For almost an hour after I dried myself off I sat in the cockpit of Cetacea replaying the Descension of Events, one by one, in my head.

Of course I never should have gone after that stupid fucking cover! But there’s a greater lesson here, right?!

Life is delicate and forever in the balance. It takes multiple levels of consideration to survive any day on a boat but life on the water demands awareness that leaves very little room for mistakes and it really is a matter of life or death. My (or Dena’s) life or death and every once in a while we get a humbling little reminder of just how delicate that balancing act of ours really is.