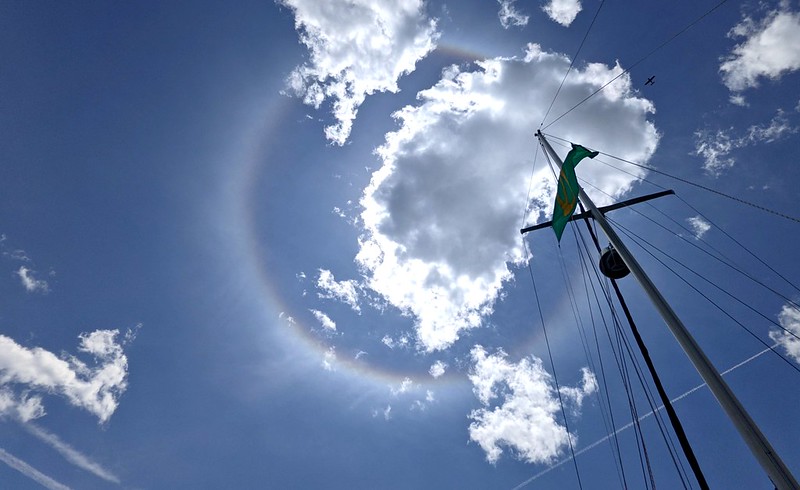 The entire year before we sailed away from the west coast of the U.S. in 2006 was spent on the three essentials of sailing beyond the curvature of the Earth. The perfect balance of Mind, Body and Boat.

You absolutely have to get your head in the right place to sail off into the sunset, or rather, you have to lose your mind before you can let go of the addictive chains of society and just sail away.

But what you absolutely have to have is a healthy body and a ship shape boat.

Finally, we got a weekend that was calm enough (in the morning at least) to allow us to go aloft in the mooring field. Between the powerful springtime winds and the near constant work boat traffic we’ve been a bit put off. We needed to deal with some “roller fouling” issues and bend the headsails to the foils before we could do any sailing! The staysail went up so fast and the new furling line and fair-leads made the staysail rig glide into place. But the yankee headsail would pose some issues.

Just the fact that Dena’s been riding in excess of 60 miles a week and works at moving thousands of pounds a day and I’ve been on a rigid workout routine for months now made it so much easier for us to muscle each other up the mast. We’re both feeling very strong and healthy now-a-days which is good for hoisting human bodies.

The whole reason I brought up the Hawaii trip above was to talk about the roller furling system aboard S/V S.N. Sapien. That was the boat we sailed to Hawaii from San Fransisco.

One of the (manymanymany) reasons we bought S/V S.N. Cetacea as quick as we did was the fact that she had twin Furlex 200s roller furling systems on the bow. It was the exact same system S/V S.N. Sapien had for her single 130% Genoa roller-reefing headsail.

…a system we never had any issues with.

The only problem with this ‘new’ twin Furlex system is the fact that it’s almost exactly the same vintage as the one we had on S/V S.N. Sapien…new cir. 2002, which makes these very intricate pieces of machinery very old in roller furling years.

Which is close to the cat-year equivalent when you add in the ineptitude of most previous owners of sailing vessels.

That’s a twenty year old cat with dickheads for feeders!

Anyway… The extrusion system that holds the sail on the Furlex is a series of locked together aluminum rods that connect via a push-in clip above and below each rod. No one clip supports the entire rig but dog help you if a clip breaks out aloft. Well, that’s exactly what happened and dog did not help, neither did cat.

The top most extrusion piece de-clipped because of a pig-tail cable attachment that was shabbily installed at the head of the yankee headsail before we bought the boat. We removed the pigtail when we first encountered the issue last summer but it didn’t fix the gap in the extrusion. We tried to go aloft on three separate occasions to bring the clip back in place but could never quite get the rig to actually clip together. Which, by the way, is incredibly frustrating 40 feet off the deck in a harness with a bag of tools on your hip. Regardless of the issues, Dena got the track lined up, we hoisted the sail. The upper rig got stuck at the gap, then I went aloft and guided the sail rig the rest of the way aloft. Annoying as fuck but ultimately effective.

Now it works perfectly and looks totally awesome with our newly rebuilt and recovered yankee and saysails aloft. But, let me tell you, we’re not going to trust it to do a long offshore passage that’s for sure.

The way it sits now it could work for years without a single issue as long as we do our regular PM’s routines but that’s the kind of tech that is almost guaranteed to explode in your hands a thousand miles offshore. Exactly the kind of thing you don’t need on your lost and wandering mind while crossing an ocean.

I’m not necessarily saying we’re going to replace the Fulex’s. I like ’em, they work really well especially when shortening sail in a blow but it might be time for a full-scale overhaul when we pull and rebuild the mast in the fall.

Until then we’ll put this system through its paces to find the flaws so we won’t have to stress our (not quite sane) minds when we sail away again.