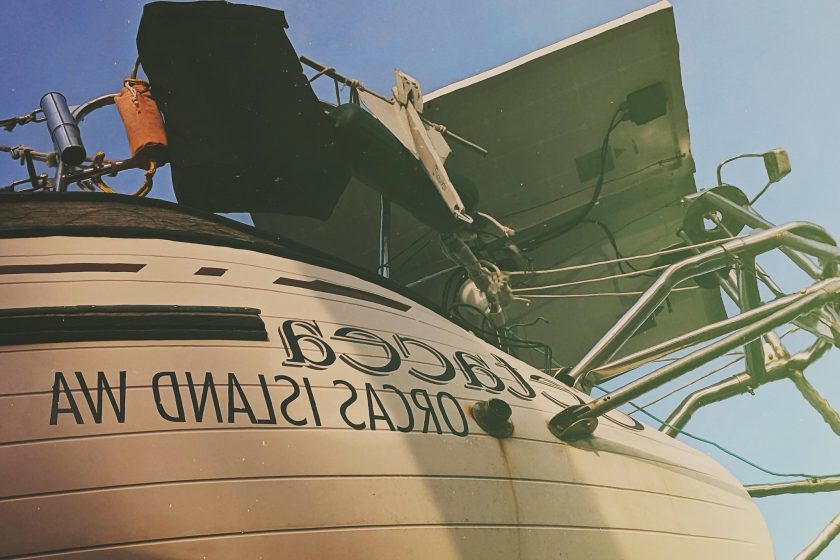 One of the biggest set-backs you can come up against when your boat is your workshop/is your home is the weather. Springtime is the worst when it comes to relying on the weather!

Last weekend was a total bomb. It was cold and blustery and about as uninspiring as it gets for working outside so we completely blew it off for a raging Cetacea Dance Party!!!

But this past weekend was absolutely perfect for doing the worst job ever. Through-bolting the primary support bases for the Alternative Energies Tower (AET).

We’ve had the AET aboard now for three weeks but because every part of installing this thing is a two person job we really did just have to wait until the time was right.

The first thing we did after a healthy breakfast at The Capitol Cafe’ was pull all the tie downs and mock up the AET (above).

Next we drilled the holes and emptied the lazaretts.

Now I can’t exactly remember who once, a million years ago, compared every job in a lazarette to dumpster-diving but that’s what I think of every single time we get to do some work in a lazarette. Diving in a dumpster sucks and so does every lazarette I’ve ever dove on.

I didn’t take any pictures of us in the lazarettes this time. We both just wanted to get the job done as soon as we could before the weather went tits-up again in that uniquely- springtime in New England- kind of way.

Like every project we do together we split the work into left-handed and right-handed gigs. Dena (lefty) dove the portside lazarette first. She nailed that shit in a mere hour and a half. During that time she invented the butyl-tape-on-washer-and-wrench (BTWW) method of fastening an unseen through-bolt from a lazarette. It was a painful process to watch but her persistence ultimately payed off and we moved to the next dumpster, mine.

Because of Dena’s BTWW I was able to get the first three of mine in record time but I couldn’t even feel the fourth one, I mean, not even close. So Dena jumped down in dumpster numero dos for the day and, to much avail, nailed that fucker! While she was in my lazarette she also discovered that one of my washers had fallen away before I got the nut in place so she took the liberty of fixing that mistake. We celebrated with a nice big lunch then epoxy-n-lagged the aft AET supports. There, done!

With the AET through-bolted on the forward supports and epoxy-lagged aft we now have a completely secure support system for the tower. All-in-all it took only 7 hours to install four bases and sixteen bolts. That’s damn good if you ask me!

This next weekend’s weather is looking pretty good again so we’re hoping to hard-wire and install our new solar system on the AET next.