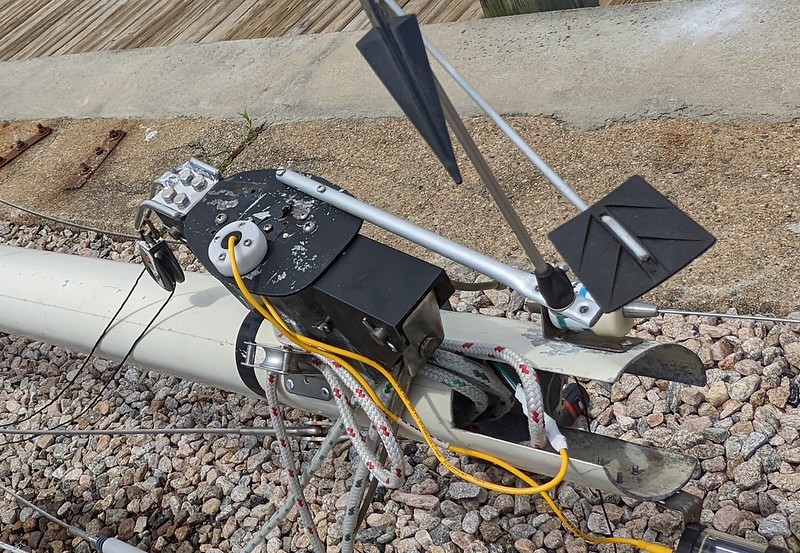 We showed up at 0630 on day three and dove into the project like a couple of giddy school kids. In our recap of the mast project the night before we both decided we were going to take our time on day three. Really dig in and get everything done to perfection. Take lots of pictures relax and enjoy ourselves.

I (Dena) told my dad that we had about a half-day’s work left and a full day to do it in. Luxurious.

…this was not to be!

The grumpy old dude in the green golf cart pulled up a little after we got our work site in order and asked if we were ready to put the mast back in the boat. We told him we were not quite done with the project but we’d be fully ready by the next morning.

“No, your mast has to go back in right now, where’s your boat? You said it would only take a day or two, it’s been three days!” No, it hadn’t and no, we didn’t.

I (James) reminded him that we said it was a project of discovery and if we discovered any big issues it could take up to a week. I tried to continue by telling him about our roller furling discoveries and repairs but he cut me off, said I’d never said a week and we were in the way of his fuel delivery.

I looked at the guy standing next to him and he appeared to be completely embarrassed.

Just before I asked him if he was calling me a liar to my face and brought the whole stupid situation to a new level of regret, Dena jumped in and asked how long we had. What was the latest? He blustered and finally came out with 3pm.

My reply was a simple well, I guess we better get her ready then. In our flurry of angrily pulling electrical cable and wiring the steaming light, tricolor/anchor masthead light, and repairing the VHF cable, I forgot to do the things we both set out to do that day. I forgot to take lots of pictures, relax and have fun and perhaps that is the reason I discovered this…

…the very definition of a tragedy at sea!

The image above is of our former upper main clevis pin for the staysail roller furling. If that would have parted under a load at sea, we could have been dismasted. That one discovery was the whole reason we pulled the mast in the first place. It made it all worthwhile.

We installed the halyard restrainer to fix the angle between the top swivel on the furler and the mast (one of the two reasons the yankee furler foil had been torn apart at the top).

Since we were now in a hurry, we gave up on the idea of running the radar cable inside the wiring channel with the electrical and VHF cables. I (Dena) rode to the hardware store for the Annie Hill answer to loose cabling twacking around inside a mast. They didn’t have pool noodles, but they did have pipe insulation.

About two hours later, the green golf cart pulled up next to me and the ‘ol curmudgeon just said, “Okay I got the fuel delivery changed to Friday so we can put your mast in tomorrow. Take your time.” We said we’d be there first thing in the morning.

We completed the mast re-assembly less than an hour later. Time for some fried fish.

A 5am alarm got us up and going, and we drank our first cups of coffee after James hauled the anchor. Into the slip, a good tightening of the bobstay and bowsprit bolt, and we were ready for the workers to show up and let us get out of town before they’d finished their early morning meeting.

As per our experiences to that point, nothing went to plan. We were ignored for a couple hours, then I (Dena) tracked down the curmudgeon who said he’d find the rigger. We puttered around with little projects and cleaning…

Another couple of hours later and I was steaming. The small craft advisory for the afternoon made us want to be somewhere comfortable sooner rather than later. I found the rigger myself and, in strange but verging on expected fashion, the embarrassment of the guys around the curmudgeon is what got them all moving to make this happen.

I shooed them away as soon as the mast had enough wires connected to hold it up. The rigger did us the solid of letting us use his mooring (since the wind had already kicked up by the time we were fully rigged), and we moved the boat the short distance. An epic walk for groceries, and we started the tuning process.

The mooring field does have some attractive sailing vessels, and it’s not a bad place to put the boat to rights.

We waited out Friday’s gale, then bent the sails on Saturday.

Our go/no-go list now consists of only two things: Monitor and watermaker. We’re eyeing a weather window that starts on Tuesday, though it has a bit of high wind on Friday that we’ll watch. If the forecast stays good or gets better, we will be off the continent in just a few days. If we have to wait for a different window, well…that’s planning an ocean passage for you.