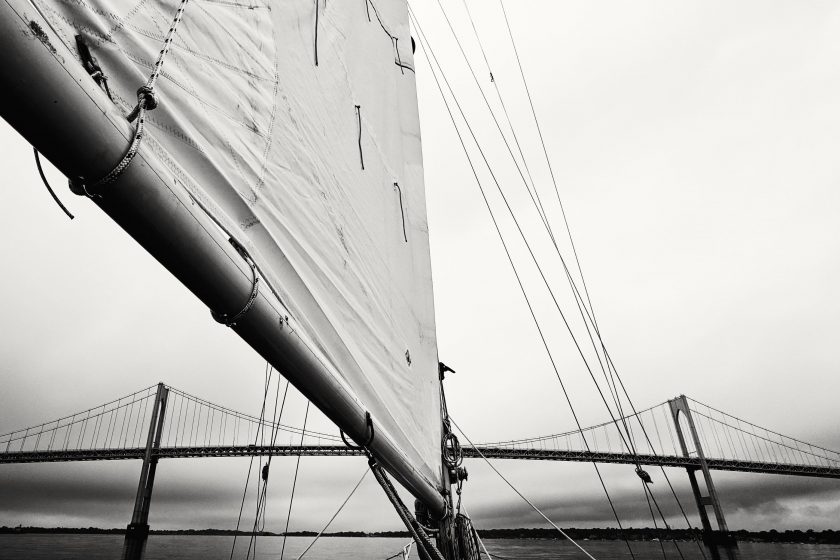 It’s not that Newport’s a particularly bad American city or anything, it’s just that there are so many opportunities for people like Dena and I (James) in Newport that it tends to suck… me… in.

That sucks ‘cuz we’re not doing that right now.

We have an ocean to cross and an ever narrower weather window to get ‘er done. We’d expected to be gone by now but storms have been interrupting our plans.

The newly rebuilt sailing rig performed flawlessly on the broad reach from Wickford to the gap between Connanicut and Prudence Island, right down to having a safe and pleasurable amount of weather helm, but those are truly ideal circumstances in every sense. Once we turned upwind, the lee helm we’ve had too much of returned and we had a hard time getting through a tack. We realized that we really had changed the dynamic of the sailing vessel with ballast and that was a bit disconcerting. The fact is we added a structure on the back of the boat, plus we’ve never had this boat as loaded down as we do now that we are ready for an ocean crossing. So we got to move all our shit around in Newport. We’ll fix the remaining helm balance issue with the fine-tuning of the rig.

I did an early morning diagnostic on the solar array in Bristol (a complete loss of a visit, since we weren’t able to provision after all even though we’d paid for a mooring) and the news was all bad. For some reason we weren’t making any power on the starboard (sun-facing) solar panel. The bluetooth diagnostic gave us all kinds on conflicting information, so we had to pull everything apart step-by-step.

It seemed like the solar controller had gone bad and neither of the tech support people were able to pinpoint anything we were missing. They offered to replace it and I (Dena) decided on the spot to give them the Newport Maritime Center’s address. The only things we achieved in Bristol were that series of diagnostics and taking off more hair.

We motorsailed down the next day in a light breeze with a fair current and made good time.

Pluses: It has space for anchoring. It has a walkable-distance grocery store, laundromat, and hardware store. It has multiple free and open dinghy docks with trash receptacles. There are some amazing cruising boats coming through there at any given time. Minuses: Everything else, including crowds and mega yachts and too many boats anchored too closely together with too little rode for 20+ foot depths.

We got the replacement solar controller and took coin-op showers at $1.75 for 7 minutes (which is a long time with as little hair as I have now). We got the solar panel working again, though it’s far from needed with as little draw as we have at anchor.

Oh! And we have kept our anchor light switch on since we got the mast back up and that bright-ass LED just keeps turning on when the sun goes down and back off when it comes up. That’s been a true pleasure. Still, it doesn’t use much power. If there’s any wind at all, we wake up with batteries just as full as we went to sleep with.

The netting we took off right after buying the boat finally went back on, along with 150 pounds of food and about 50 gallons of water. We’re as heavy as we’re ever going to be, right now.

The weather promised to be terribly nasty on about day 5 if we left when we’d thought we could, so we downwinded to Prudence Island and anchored outside of Potter Cove. We’re continuing to do little projects and keeping a close eye on the weather.

We did what we wanted to do to ready the boat for an ocean crossing and now we just want to get this incredible vessel, this crew, this cat in the ocean where we all belong.