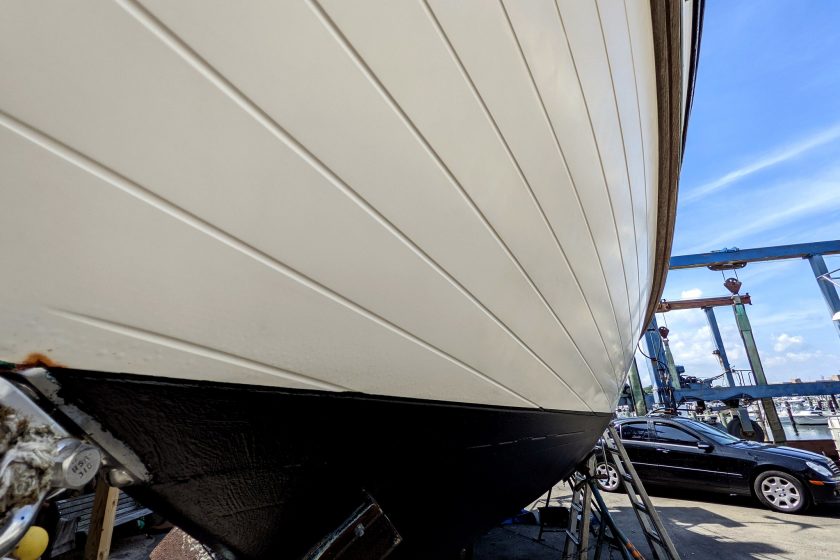 Sailing, that’s what we’re doing! Without touching the wheel!

She was driving herself, but she was sluggish. We both knew this boat could perform better but it just wasn’t happening.

Then, there was this moment when we were opened up at the lazarette AND the engine compartment and each of us had a different and somewhat horrifying view of the packing gland. We decided there was too much water coming in via the stern tube (where the prop shaft goes from inside to outside the boat). Way too much. This was reminiscent of our near-death along the inhospitable Oregon coast.

No, no no no. That’s not going to happen again. We are learning creatures and, guess what, we learned this one.

The stern tube slash prop shaft ecosystem has a stuffing box or packing gland, choose your language, that puts flax or its modern equivalent (teflon-inpregnated graphite fiber) into the gap. The packing material is supposed to ride against the prop shaft well lubed so that there are only one or two drips of cooling water per minute that the prop shaft is turning. Ours was dripping even when still and rather more like flowing when underway.

James put a wrench to it and it got worse.

September 11, 2001, was the date when our packing gland blew out on an offshore trip south of Newport, Oregon. Our bilge pump burned out. Our manual bilge pump tore both diaphrams. We barely kept ahead of the flood by hand-pumping with a tool designed for emptying your dinghy after a rain. There was no calling for help because our radio was abuzz with the chatter of the Coast Guard and the entire commercial fleet from every nearby port as they tried to track and save the boat of 7 people left to break up on the rocks after the captain and only knowledgeable boater had a late-evening heart attack. No one on the boat knew where they were or how to operate the boat and we knew that we could pump ourselves exhausted in order to make it to Port Orford without diverting any of the rescue efforts our way.

Ahem. Well, the bottom line is that we knew we didn’t want to be in the middle of the ocean with a big ol’ hole letting water into the boat.

We sailed back to familiar territory. What is the definition of familiar? There are the various versions of family – birth, chosen, affiliated…

…I (James) called Burr’s. Definitely an affiliated family. It’s not that we’re the same type of boater as every Burr’s customer and family member. We are, though, somehow in this thing together.

We’ve been to Burr’s before, more than once. Mostly when we are wary of our vulnerability and hoping to be treated with respect. Adam not only took my call on a hot busy summer afternoon, he was kind of thrilled to hear from us. But dude was busy as hell with a power-boater (kind of a rude guy actually but nevermind) who had plowed some of the local rock formations and needed an emergency haul.

Just like that we’re hauled out next to a rock-boater on a warm Thursday in July. Nomad spent the entire summer of 2013 here, but Cetacea is leaving this place with abandon.

Meanwhile, we had a job to do and we didn’t even know quite what it was. There was no good angle for seeing whether all the water was coming through the stuffing box or whether there was something wrong on the other side. One thing was for sure once we got out of the water and it was a huge relief: the cutlass bearing was intact and holding. Whew!!! An entire day’s work and over $100 avoided.

Once we got the muffler out of the way, we could see that someone had used sub-standard hose clamps on the piece of hose that ties the stuffing box to the stern tube. Also, that shaft looked like shit!

If only that had been the only problem.

With a monkey wrench on the locking nut and the plumbing wrench on the stuffing nut, we snapped that piece of metal right in two. Gulp. It took a rental car and a trip to both a chandlery and a hardware store to end up with the tools that would break those two pieces of bronze apart.

Oh, and multiple applications of PB Blaster over several days.

Of course, that was not the fix. That was only to break it apart. Then, it was working the locking nut down the body of the stuffing box, quarter turn by quarter turn, basically re-tapping the threads as we slowly shoved and wire brushed a couple decades of tarnish out of the way.

The wheel at the top of the picture is the sheave that turns the steering cable from the pedestal to the quadrant. It’s almost exactly the distance from the bulkhead under the fridge unit to that wheel as I (Dena) have the ability to curve my spine from ass to top of head. And yes, I have a couple of sore spots on my scalp.

On the right side, the tools that ended up getting the job done. Buck Algonquin still makes a lot of cast iron and bronze pieces we boaters need, but they don’t have a margin that allows them to finish their shit off all that smoothly. James ended up having to grind that fixed wrench about, what, 10 times? (Yes!) before it would fit the stuffing box nut. And the adjustable wrench had to be re-adjusted every 2-3 pulls. And this was all during dinner rush at the totally packed restaurant looming off our bow. No really, I (James) was grinding tools in front of 150 totally entertained diners. They had the hum-n-strum dude singing “Brown Eyed Girl” in the dining room and the crew of S/V S.N. Cetacea grinding shit in the bar.

In the end, we have a deeply known and well fixed boat system. As always, nothing can be trusted unless we’ve pulled it apart ourselves, rehabilitated it, and put it back to together (in front of an audience). That’s when we know it’s a job well done.

With the muffler back in place, we barely have any access to those two nuts we will surely need to tighten again at some point, but hey. At least we know what we’re up against!

Meanwhile, New London is familiar in the ways that we need sometimes. An epic walk to some Southern Indian Food after a cooling New England rain was just the trick.

We walked all over this town when we didn’t have a rental car and enjoyed reacquainting ourselves with the neighborhoods. However…there was another job to be done!

But this really is how we roll. We build our systems, we build our world to be for us. Don’t we all?

Got her painted for the trip, and got back in the water.