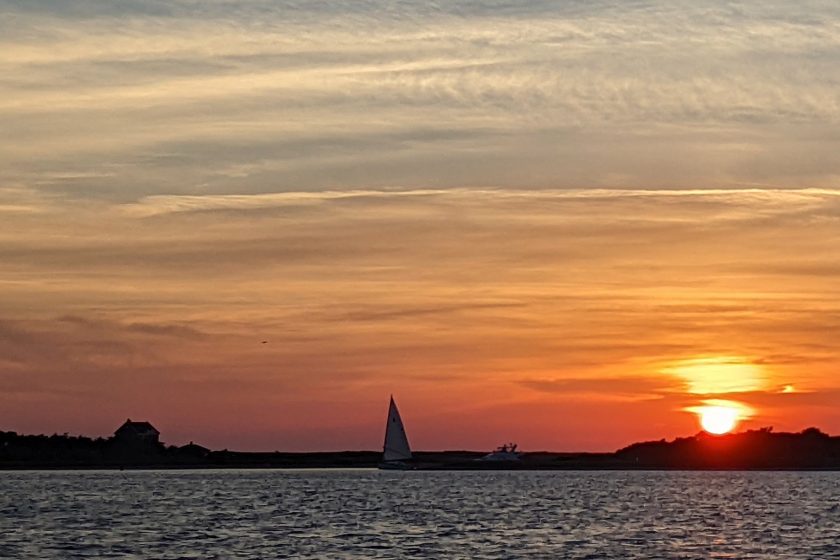 We stayed on Block Island for an (I [James]don’t give a fuck) amount of time and ultimately set our sights for that down-eastern reach we were just fantasizing about.

We set the main after re-calibrating our heading sensor (just another of the not-dialed-in systems that turned us back), jibed once and broad-reached all the way to Cuttyhunk of the Elizabeth Islands chain in the great Commonwealth of Massachusetts in the mostly disunited states of America.

Along the way, Earther Author Dena Hankins set up the Lovebot and taught S/V S.N. Cetacea how to drive herself all the way to an anchorage at an island in the middle of the Atlantic Ocean.

It was the (no really!) quintessential sailing experience…it was what we have been working towards since we left the City of Sin at the end of May.

…But it was broad reaching in 10-to-14kts with gusts to (maybe) 18. In other words, our modus operandi (add laughing emoji here if you must)!

It was that perfect downeast sail from island to island that brings so many cruising sailors to this part of the North American continent every freak’n summer! Of course the (not really an) anchorage inside Cuttyhunk Harbor was full of AIS signatures and the little grass-hole just outside of the channel was full of short-scopers so we anchored a little northwest of Pease Ledge in slightly deeper water. It (most definitely) was a perfect night at anchor and we woke with a smile.

The tide wasn’t due to turn around at the mouth of Buzzards Bay until 1500 so we came alive with the Earth at the Earth’s pace. Science tells us our planet hurtles in circles at 460 meters per hour which seems pretty fast from a leisurely breakfast offshore-ish.

And then this seasoned couple with no desire to have a hard time for cred-proving purposes…jumped the gun (WTAFOver?!). We left an hour before we’d planned (which was an hour before the turnaround), and the piping southwesterly funneled up Buzzards Bay in the exactly expected fashion. The 25 knot wind met the half-knot ebbing current like a blender, frothing up a short-period chop, I mean four motherfucking seconds between two and 6 foot waves, that came from behind but made every wave an event. We would never have beat into that shit, but downwinding was a thing we could accomplish.

Since the tide turns in different places at different times and since the current’s slack moves up-Bay over time, we managed to jump the gun by two hours at Cuttyhunk and still reach the entrance of the Cape Cod Canal, three and a half hours later, just before the turnaround. The strong funneling sou’westerly pushed us fast even once we took our initial single reef into a double reef and then furled the yankee as well. Meaning, there’s nothing casual about hitting 8 knots under double reefed main alone and we did our one-hour watches in turn and never did manage to feel comfortable enough for some happy selfie-action.

James brought us into the canal but my watch started just after. With nowhere we could dodge, I was glad to be heading at a good downwind angle, with the boom on the right side to avoid a gybe as we came to port for the entrance channel. In classic Onset fashion, our speed increased as we reached the turn and then we were pulled hard across the channel. Also in classic Onset fashion, I didn’t let myself get rattled by pointing the boat at dry land in order to create the perfect vector right down the channel. The bow doesn’t always tell a sailor where she’s going.

As we’ve come to expect, the exciting trip and entrance pay off with lovely sunsets, sunrises, and ridiculously long walks that we get to be proud of while grousing about.

And then there’s the little BIG changes we make for our own comfort.

James has been wearing this little straw hat for sun protection for way too long. It flopped down in his eyes at the slightest breeze or flew off his head and created what I (Dena) have long known as a sore spot – the humiliation of chasing a hat, well, that’s all Miller’s Crossing. He’s fixed up now, though a boat our size has only so many places to store this much hat, and Beluga is deeply concerned about whatever chemical was used to finish it.

There’s this film from 2013 called The Way, Way Back. It was filmed in Onset and we kind of fell in love with it after the first time we sailed into this bay in 2012. We’ve looked great here on two different boats now.

Ah, Onset. We still see you as our way back, our own way, way back to a place of…