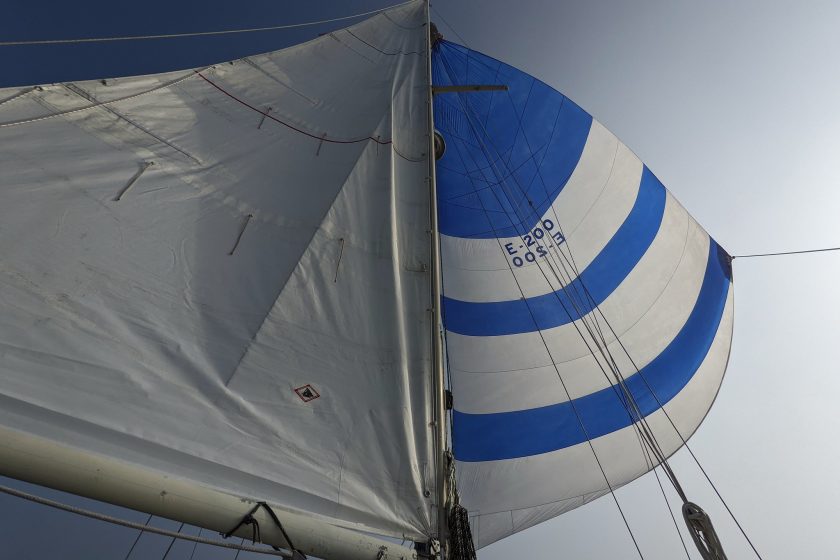 We sailed to P-Town from Onset after setting a Cetacea Cape Cod Canal speed record of 11 knots. The sail from Sandwich to P-Town was beautiful and exciting and a Cape Cod blue that only that Cape Cod can do. We had another sailboat off our beam all day and another three spinnakers three nautical miles off the port bow. All larger boats (according to their AIS info), we were last to arrive but not by much. We were the only sailboat that chose the open area east of the breakwater rather than the more-distant-from-town area inside the southern point.

We keep going through this good-sail/bad-sail routine where we are thrilled one day and then tested the next. This Provincetown sojourn had beauty…

And science, wherein we ran the watermaker into a measured container to combat the sticky-float problem with the tank meter. Our Katadyn 80E is operating better than spec, which is great news. Robust machine, even through some of the worst conditions you can put a machine through…ignoring it for years before someone gives a shit.

Did I mention beauty?

So, we shopped and saw and enjoyed, and then we set sail again for a roughly day-and-a-half run to Matinicus Island off Penobscot Sound. This trip managed to be the most glorious, unexpectedly powerful and yet comfortable sail…until it became something else.

I (Dena) set the asymmetrical spinnaker around 0830. When the wind shifted a little, I realized that I hadn’t led the halyard correctly and so I had to (got-to, got-to!) do a snuff-with-sock maneuver. Honestly, anyone who knows knows and anyone who doesn’t doesn’t, and if you are one of the handful of people who want more detail, please comment and I’ll give you the blow-by-blow but let me tell you, it was fucking cool.

Once the asym was on the port side, we didn’t blow the tack until 1630 and it was glorious sailing! We gybed the mainsail around that asymmetrical all day long, wing-on-wing when there was enough wind and on a deep broad reach when necessary.

The waters around us were nearly flat until we got well beyond Race Point and then picked up a slow roller with very little height. We couldn’t see it coming but we felt it when the energy passed through the hull. The bulk of the day was a beautifully calm but powerfully natural experience.

And there were whales. Brilliant, joy-inducing giant mammals that are as at home in the water of Cape Cod as we are in our very best dreams. At least ten of them and all different kinds and throughout our passage through the Stellwagen Banks National Marine Mammal Sanctuary.

Most of these animals were at least one hundred yards away from us (as is appropriate) but they’re huge so the show is still cool as shit. I (James) heard them breathing all around me on my first silently sailing watch in the sanctuary but it wasn’t until Dena’s next watch that we began to see them . I recognized a mother and child by the staggered blow but they dove at an angle to where I couldn’t recognize them by their dorsal fins. But on my second watch under wing-on-wing spinnaker, I saw the largest living being I’ve ever seen on this planet. This mammal gracefully moved across our bow for a very, very long time before diving and revealing the tiniest dorsal fin just before the massive wakeless tail disappeared below the surface. It was far enough away to glide weightlessly through their abyss long before we sailed over their home. I don’t think I saw that one again for the rest of the day.

Pictures? Naw, I mean, really? You expect us to disengage from the real ephemeral moment long enough to make that happen? I (Dena) think this is one of the ways I’ve been a good influence on James, the degreed photojournalist. Some things should just be lived.

And then the wind started to pipe up from abaft.

Expecting the wind to increase, we’d agreed to go into the dark with a reef whether or not it seemed necessary in the moment. Well before dark, we’d pulled the second reef.

The windwaves were making us both irritable. Short period, steep enough to bob us around if we weren’t directly downwind, but not dangerous. “Our” Cetacea reminded us who was weak and who was not. I (James) felt profoundly at the will of our ocean when everything on my body started to hurt.

And then it got, well, more natural, more real, more right fucking now. Cetacea drove on the balance that Lovebot nudged along like the Second Foundation, just enough, a little more…not quite enough.

A very long time ago (or almost yesterday, mileage may very) in 2001, my (Dena’s) dad, Dean Hankins (sometime commenter on this blog and much else besides) noted that our accounts of our adventures did a piss poor job of explaining why we like this shit. Now, he said it a lot nicer than that, but the point remains. The exciting parts of any passage are the hard parts. The story of any story is about what tested a person and taught them something. It’s hard to recount why we do what we do without sounding, at least occasionally, like we hate it.

Sometimes, even we are confused.

I got bound up for a while in the fact that we were hitting well over 7 knots, downwind, with both of our two reefs pulled. We’d requested a 3-reef main and been talked out of it. This trip finished that conversation and I was seriously not cool with how it ended up.

Then I chilled. I coped. I listened to my boat, which was absolutely copacetic with doing mad speed down the steep edge of a windwave. This boat is down for the adventure and I am the fragile bit. I am going to have to let go of some aspects of comfort in order to travel the world and this boat is training me on what I need to accept.

Down?! Down! Motherfucking down I (James) fell on the cabin sole with a grunt that elicited a “Hey, you okay!?” from the helm…am I okay?…am I? I feeel everything in that moment (no really there’s more than one double ‘e’ in that batch!) Every-Fucking-Thing!

I was tossed from comfortable settee (ass) to cabin-sole (tea-kettle) on one fucked-up wave in less than two seconds.

Dude (yes, I just duded you) I just knew my life was about to be a two week bitch-fest about my back…then that fucking Seth Thomas clock went off with 8 fucking bells at 2:23 am and Dena (my love, my savior, my partner, my reality [right fucking now] Yeah) saved my life. Hey, HEY!?!! You okay (she yelled from the helm). We both laughed at our faulty antiquated time piece and…

James answered me (Dena), finally. “Yeah. Yeah,” from the cabin sole and he isn’t the guy to not freak like a car-hit-cat so yeah he (me[James]) was unharmed…

My (Dena’s) next down-watch, I put a single starboard back cushion on the cabin sole along with every single throw pillow that our friend Kris from Exit talked us into buying at the thrift store after we bought this boat. It wasn’t enough to ensure sleep, though my off watch started at 11pm (hours after my usual bedtime) and didn’t end until a hallucinogenic 2am.

Yeah, oh yeah, I’m good! (Me, James.) I was a dumb-shit, I WAS SLEEPING ON THE WINDWARD SIDE! I got knocked off the bunk! Of course I did. Dena said to dress a bunk on the leeward sole and I just couldn’t hear it. I didn’t have have my sea-legs, or rather I didn’t have the sense to understand her truth in the moment. But I got it, on that next watch.

Nine meteorites in a colossal sky that dominated my imagination like a Vinge novel. Every single color and angle that could be bombarded by the cosmos was alive before my puny limited spectral awareness. I saw an orange streak that bifurcated the night sky from north to south. I saw a blue ghost laugh about ten degrees above that and I felt like the “eyes and ears of my local universe” to my own infuriatingly-hilarious-insignificance.

“Can anything live here?!” Yeah, no really, I asked (maybe screamed) that ultimate existential question to a raging sea at night. And then, I shit you not, I heard an unknown avian being laugh…hysterically! Quite possibly at my gloom…maybe not. Fuck yeah! Four bells, thank the almighty Gato!

I (Dena) struggled into my harness and life jacket and eased my way into the cockpit and James reported shooting stars. Okay, good. Maybe I’d see some too. Except I didn’t. I was able to bring us onto a better track for making our ostensible destination, Matinicus Island, though I also did some deep thinking about whether it mattered where we next touched bottom. The hours between 2am and 5am just…happened. I mean, sometimes there’s no stronger feeling, no deepness. No overwhelming realness. Just things happening, one after another. Wave after wave. Stabilizing, destabilizing. A new deeper bruise, a more sore triceps where I braced myself too hard.

It was a little too light in the sky once James took over but I had enough light and time and brain to put both of the back cushions on the cabin sole, creating something approaching comfort in the rocking and rolling.

Matinicus Rock… It was supposed to be right there in the ocean right beyond that mist, beyond that next wave, just beyond that fucking fog. James sought it and then I gave up on sleeping and made coffee and then we traded watches and then we were there, among the dangerous rock ledges of Downeast Maine.

It was early in the day but late in our trip. We slept.

A day and a night and a morning later, we anchored in Rockland Harbor, comfortably at home, aboard our home, in a place familiar enough to provoke a very, very long respite.