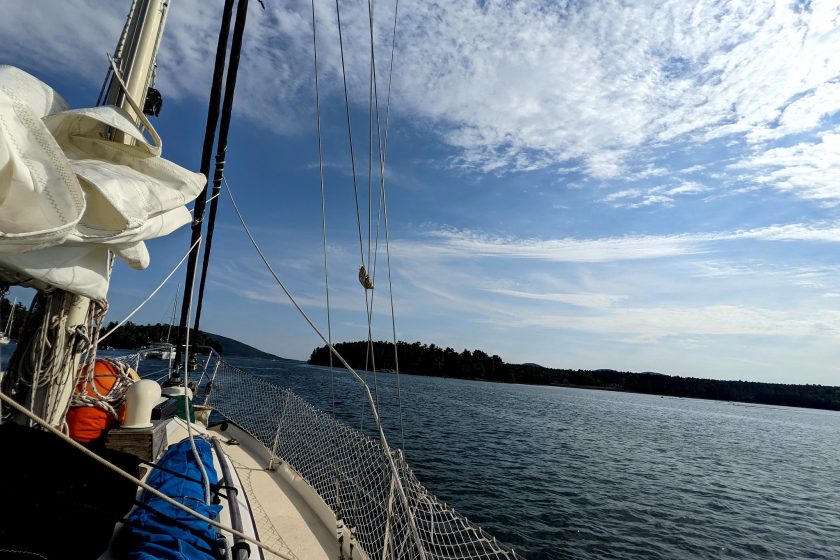 Way back in 2015 we broke the boat coming around the bottom of Mt. Desert Island at the Bass Harbor Bar. We came up on the bar hard and fast on a close haul under full sail and the world just proved a little too much for our good old boat. This particular bar is a violent place where two massive tidal currents clash over a rocky shallow spot at the epicenter of a wind tunnel and Nomad just couldn’t hold it together. The combined forces of all that nature pulled the genoa track right out of the near sixty year old teak toerail. We struck the genoa and motor sailed up the Somes Fjord to the stillness that is Somes Harbor.

This time, it wasn’t all that.

The boats behind James looked even better in reflection, with me (Dena) co-opting a signature James Lane photographic style.

We walked and did a couple loops through the local Hamilton’s (hi, Dave!) and walked some more. We ate out a little, but not as much as we were tempted to. There’s some pretty good food there.

We stayed in Rockland for a nice long time (like we said we were going to do) but we were itching to reach places previously unseen about three days in.

Sailing off the anchor is such a deep pleasure. Anytime we have to run the engine irritates us (especially Beluga Greyfinger, mightily). I (still Dena) locate one of my most sublime pleasures in the experience of a nice quiet morning leading to a world in motion without explosive interruption. It is to me what an aspen grove is to some or a sudden long view after climbing a long hill. It is connection and rightness, presence and being.

It doesn’t always last through the day, but what a way to set off!

We motorsailed on glass through the Fox Island Thorofare to Seal Bay, just off the island of Vinalhaven, Maine. Being anchored there was a stunning forty-eight hour nature show.

At sunset, the hundred and fifty or so seals mount the rocks in the bay, get all belly-achy and start belching and farting at each other in an brutal echoed cacophony. It’s absolutely hilarious for about twenty minutes and then it just stops as they slide off into the bay. I’m so glad I (James) don’t speak the language, otherwise I might be inclined to join in.

We knew that, if we left, we were in for a totally dead crossing the next day from Vinalhaven to Stonington on Deer Island, but the two days after that were promising rainy Nor’Easters with gusts exceeding 30 knots. We needed provisions and were hoping for project parts, plus we’d just been stationary for a while and wanted to keep moving.

We ducked into Moose Island west of Stonington and grabbed a mooring, mainly for the laundry and showers.

…It was a crappy place and way too much money so I’m not even going to say their name.

Something we’ve known since we bought Cetacea is that Mainers use mooring pennants that are just too damn big for our chocks. We can’t get the loop through the purpose-built fitting for that, so we often attach the pennant to our own snubber instead. It’s only a problem in tight mooring fields, and it keeps the forces down low where we like them.

The grocery store right down in Stonington is no longer the robust resource it was last time we were here, and the community theater is no longer showing movies. It just didn’t have that much to offer us. More places are open later in the week, but the bill goes up for every day they are paying rent without making money.

We make the most of every place, though, and did enjoy the continued experience of liking the boats around us more often than happens anywhere in Maine.

We had good protection from the winds, but the rains caught us as expected. We got to do quite the epic walk on Deer Island to a grocer a few hilly miles away for some much needed supplies. It rained ever so lightly along the way, just enough to pop the greens and cool us all down just a little.

Also, we discovered what this marina is really all about. One of the biggest criticisms of Maine, especially Down East, is something we have long scoffed at. It’s that the local industry isn’t oriented toward the ephemeral dolla-dolla-bills-y’all that most waterfront destinations have caved to. We never had a problem with that in Friendship or another dozen places. Partly, it’s because we’re not looking to part with hard-earned cash in return for something we can provide ourselves, like good sleep.

But this was one occasion where the hype said this place would be of service. We paid.

Only to discover that yes, this is Downeast Maine and fuck you for wanting more attention than this boat gets.

Wanting a shower without wetting your feet with other people’s showers? Kinda delicate, arn’cha?

And, actually, I (Dena) get it. I wish I hadn’t paid to re-learn this lesson, but sometimes, that’s what happens. Guides and reviews and such need to get really really real. What did you expect and why? What did you get and who should be credited or blamed? I mean, I’m going to blame advertising. The whole of reality gets skewed when people want to be seen a specific way, and advertising is the codifying of that urge into an industry. Hmm. Maybe that’s why I just couldn’t with Mad Men, though I’m absolutely into Christina Hendricks and would watch her do almost anything.

And then we were a part of the flow. We were not alone in sailing – many a good old boat was also flapping that canvas. It was stark, though, in a gloating kind of way, that all the newest, fanciest, most expensive boats were burning their dollars on dinosaurs while the rest of us coasted on the breeze. It was enough; it was not so much.

We approached the Bar That Broke Us way back in 2015 with the respect it gained from our experiences.

We passed the west buoy well outside the channel.

And sailed well past, into the wind tunnel between the Cranberry Islands and MDI, then beyond, watching the race boats pop their colorful spinnakers on the downwind run away from us.

We celebrated the success as we are wont. With food…”and revels, with victory there must be revels!”

And enjoyed our evening in the anchorage that isn’t marked on the chart but is well-defined in the harbor management plan (and yes, I {Dena} check these things).

And then we sailed up the Somes Fjord back to a much revered harbor of refuge. A place of quiet and clear darkened skies and Lysistrata’s Cove and…