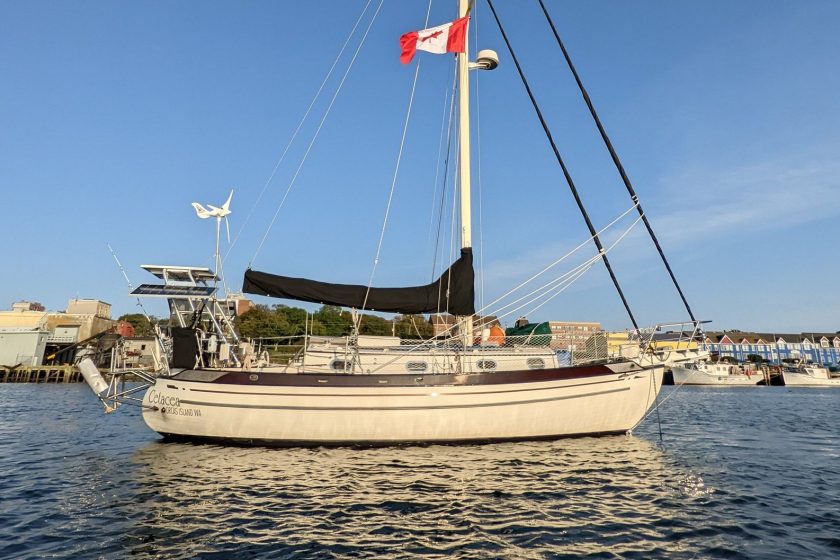 Nova Scotia (or some subset of Nova Scotians the makeup of which I cannot really imagine) have designated a certain route around the southern coast as the “Lighthouse Route”. There are signs from Yarmouth south and around to Halifax.

Being us, we were totally stoked about seeing parts of Nova Scotia that the weather and lack of charts had made difficult, especially the plethora of lighthouses. Also being us, we were surprised to find that the lighthouses had no “scenic overview” not even a pull-off or a car-park from which to see them. Being us, we made due where we could.

The first one we could figure out how to get close to, meaning driving down residential roads and parking at a traffic barrier, was the Pubnico Harbour Lighthouse. We ended up thrilled because, across the way, a wind farm flashed in the on-and-off sunlight.

We clambered over tide-tumbled rock to get closer to the prize, and found prizes along the way. Also found, assorted evidences of human carelessness, especially lobster bands (what they put around the claws). On the other hand, there was that lighthouse…

The natural, the civilized, and the human…all in one incursion of the Atlantic Ocean.

Heading south from Yarmouth, we were driving toward Cape Sable. The bounds of the Atlantic Ocean and the Bay of Fundy and the Gulf of Maine are all so much less precise than those land-lines that separate countries, so it’s a little hard to say exactly what bodies of water we were looking at. We were in broken, rocky groups of islands and islets and ledges. Those hazards have always been safer navigated if marked, visually, by lights, and the people who settled here, from the French Acadians to the British battle-hardened to the American Loyalists to the mixed heritage folk who live there now, well, they weren’t navigating like the Mi’kmaq in shallow draft deerskin-canoes . They needed lights.

Today, from land, seeing the lighthouses pretty much depends on a harbo(u)r being nearby.

Most of the lighthouses along that “Lighthouse Route”? No visibility from land. A few, though? Quite nice.

One had been moved inland for posterity.

We drove quite a ways without seeing most of the lighthouses that were out there, but hit Halifax in midafternoon which is the perfect time to get sushi. The server there was not tuned in to the weather that was coming down. We’d been about nothing but Hurricane Fiona, distracting ourselves in fact from Fiona on that very trip. I hope that we influenced her to check the forecasts because Halifax got pretty well battered by that one.

We crossed the peninsula and went from tides less than 10 feet to a 34-foot tide that gave us a visual aid for why the currents were so profound in the Bay of Fundy.

Point Prim lighthouse in a low-light sunset, and we were happy to head back to the boat and Beluga Greyfinger.

We returned that rental car about 8 hours before Fiona made our lives miserable for the next 24. As usual, we have very few photos of this reality. Several boats arrived. One had to be chased away because they were TOO CLOSE. Another anchored far enough but we’d have to keep an eye out. A third circled the harbor a few times and then set their hook but failed to figure in the 14′ tide. They had no idea they would be on the mud, fully out of the water, by low tide. It took a kind local going out to tell them. They tried to reset quite a bit too close to us, we (the local in an inflatable dinghy that had irritated us by tying up sideways and me, Dena)convinced them that paying $30 per day for a mooring was a better idea than dragging down on us.

Fiona was a big deal, but not the end of the world. Big wind made it difficult to do regular things (cook, pee, sleep, etc), but we didn’t drag and the other boats didn’t drag into us. Fiona made a mess of other parts of Nova Scotia, but in Yarmouth only the unprepared few experienced things like deck furniture breaking their windows. People around here are used to the weather getting mean now and again.

We had the usual feedback loop of calming the kitty and therefore calming ourselves all throughout the storm, and we made it through. We suffered no damage that we could find in our post-storm inspection (which is pretty damn thorough) so all we had to do was wait for our next weather window of sou’-westerly opportunity.

There were plenty of reasons to be creeped out by the fishing industry in Yarmouth and some very puzzling incidents (like the Vietnamese place called Just Pho You where we entered, took all our layers off, and waiting for quite some time before realizing that the workers had just left the door open and gone…somewhere), but there were some very wonderful things as well. After the storm, we showered and did more laundry using the key that the harbormaster gave us the day we arrived. We’d asked if we could pay some kind of fee to use the showers even though we weren’t on their dock or moorings, and he said there was no need to pay. In those three weeks, we had more showers than we’d gotten since leaving Lynn!

Other odd culinary experiences…the Mexican restaurant, Mr Gonzalez’s, had a Taco Bell/KFC right next to it. Of course, we were not going to go to Taco Bell…but Mr Gonzalez was on vacation…the whole time we were there.

One of the first things we discovered is that there’s this thing called Donair sauce. It’s a Greek immigrant’s answer to the fact that their gyros weren’t attractive to the locals, and it is quite simply condensed milk, vinegar, and garlic powder. We were given a prepackaged container of it along with a pizza we’d ordered and I (Dena) wanted to spit it back out right after it touched my tongue. Luckily, I tried it right off the bat and so had plenty of other food to erase the taste. Knowing about this thing tuned our antennae and we realized that there was a theme here. Everything was a bit sweeter than I would ordinarily expect, from salad dressings to an unforgettably bad pizza sauce at a different chain. Luckily, they kept the white wine broth for the mussels simple at The Rudder, and holy shit was that a good meal.

A weather window opened, and we eagerly grasped the opportunity to get the fuck out of Yarmouth, our home in Nova Scotia for a total of three whole weeks. One last shower and a trip to the drug store…Random piece of information…meclazine (generic Dramamine) is a controlled substance in Canada, requiring your health card if you have one or a whole form that needs filling out if you don’t. Surprised me. Anyway, and shipping the dinghy, and we went to bed early so we could get out of Yarmouth Harbor before the current turned against us early the next morning.