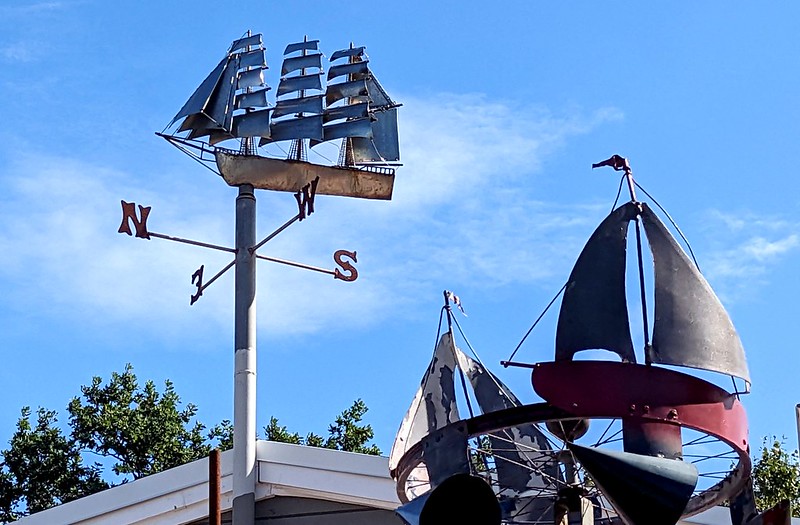 …are no doubt part of the game when it comes to offshore sailing.

The offshore passage to Cape Cod from Nova Scotia had a system failure that took us both by surprise. The Monitor self-steering rudder broke. Cracked in two ten hours before we were hook down in P-Town. We were glass becalmed entering the Cape Cod tidal influence and making about six good knots over the ground. LoveBot 2.1 was driving Cetacea along just perfectly when I (James) left the helm after my last daytime watch.

I (Dena) monitored our course and kept a sharp eye out for sign of cetaceans. We weren’t that far from Stellwagen Bank. We started to back around too far south and I looked back at LoveBot. The swinging rudder was hard over to starboard, which steers us to port. I tried adjusting the tiller pilot portion, then the wheel adapter portion, but I couldn’t get it to straighten up.

I pulled the cord that releases the rudder so it can be raised when not in use and a busy foamy froth erupted where it should have appeared. I called for James and he came to take the helm while I figured out WTF.

We had the rudder set up to be retrieved by pulling on a length of seine twine. When I hauled on that, the pressure on that thin line cutting into my fingers. To my utter surprise, the entire rudder banged off LoveBot’s frame on its way up to me…completely unattached to the Monitor.

Someone (Not Fucking Us) beat the hell out of this Monitor windvane. LoveBot has been through at least one bad accident. When we put her on Cetacea she was bent to hell so we knew we were going to have some surprises ahead. The frame has a lower curve in it that means we tie the control lines on the bottom in half-hitches to make right angles and I’m [James is] telling you it works…until it doesn’t! Fuck! The rudder had clearly been previously manipulated (quoting myself “I’m being kind”) by someone with access to sheet and tube metal and a fair knowledge of welding (says Dena), if not much in the way of aesthetic flair. (I [James]think that was Dena being kind…kind of.)

In the picture above, the tube on the rudder slips over the tube on the hinge assembly. (That’s what’s all the way to the right in the photo.) Those two pieces were held together by a weld that went all the way around. The weld had failed, but the buoyancy of the foam inside the rudder had kept the rudder in place until Dena let the whole thing fold up behind us and it tried to take off…like float away in her hands held only by sharp-ass’d seine twine! Ouch! (visions of Port Orchard cir.2001)(anyone remember that? crickets? It was a long time ago.)

As you should have read in the previous post (there will be a test), we hand-steered to P-town and got safely anchored. The remnants of a hurricane once known as Ian heaved over us for the first couple of days and we couldn’t get off the boat, let alone get any work done. It was infuriating until we realized we had awesome internet again!

Time to download some serials, as Murderbot would say!

As soon as it was safe (ha! in 20 knots of steady with 30 knot gusts), we launched the dinghy, added the motor (in a four-foot sharktoothed chop), and went into town carrying the pieces of the rudder system and a desperate need for some free veggie sushi. The first welding dude with a shop we tried belonged to a guy named Madeiros, which made my (Dena’s) Azevedo-descended heart happy, but he was shoulder-deep in getting a septic-tank-sucker truck back in business and had another commercial truck waiting for when he was done with that.

In what seemed like the same amount of time it would have taken for him to weld it, he worked out who could do the work (Adam at Provincetown Welding Works) and where he was (Stop and Shop) and when he could be at the shop (right about the time we’d arrive by foot). I’ve been leading up to this with the artwork that fronts the shop…studio? It was definitely not the place a septic system maintenance truck would come for the most solid utilitarian work. He might end up with a turtle head on the back of that shit.

We talked over the project with Adam (the “kind of” owner), left long enough to get lunch, and came back to him grinding his freshly made welds. Then, he intimated that the repair wouldn’t hold forever and offered to put a bolt through as well (belt and braces, as he said).

It was a thin-walled stainless-steel repair on the fly! That’s what you get on the the fly. We were thrilled! Adam did the best he could in a git-r-done ASAP kinda way and I (James) packed that rudder in my pack and hauled her back to S/VS.N. Cetacea, home. As you can see above, looking left would shatter a window and looking right would clock a tourist.

It worked! Or at least I (James) truly believed it worked. I mean, it looks (if not perfect then certainly awesome) like it could work.