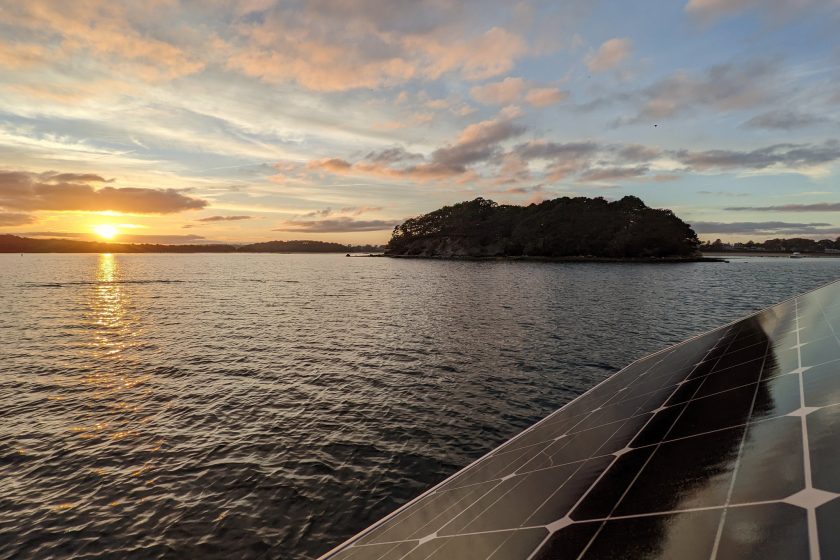 Water rocks. R/O desalinated, drinking-water-filtered water is the best, especially when the watermaker is powered by wind and solar.

Water is also very dangerous. When it’s fouled by seeping cracks from the bilge, the real profanities settle into your body: salt and motor oil and slime and the bacteria that love them all.

And then we got our lovely Sailing Vessel and Sovereign Nation Cetacea, affectionately abbreviated S/V S.N. Cetacea. This boat came to us with a watermaker, a really good one, that had an opaque history. The P(revious) O(wner) had never touched it. The people before him? Who knows. What we knew was that we needed to make the system operational and we did. We cleaned it up, re-plumbed the whole mess and it worked! We were thrilled.

This summer, we’ve run this motor over 50 hours. In that time, we’ve made about 250 gallons of “Clear, Clean”, water. For us, that’s enough for daily life and, for the Katadyn PowerSurvivor 80E (our watermaker), that’s more than the nominal yield.

Over the Down East Maine part of our travels, we had a new and disturbing experience. The watermaker popped the circuit breaker. The next time, it popped on startup but was okay on a second attempt. Then we pickled it with biocide to protect the delicate R/O membrane from bacterial growth and let it sit for our entire Nova Scotia experience. The problem got progressively worse on the sail from Yarmouth to P-town, when it just up-n-quit.

I (James) was trying to get some shut-eye on my down watch when I heard the issue actually happen in real time. The watermaker started sounding like it was slowing down, almost like it was working way too hard, then it popped the breaker.

…then it died for good! Every time I’d turn it on after that it popped the breaker.

Eighteen hours from landfall and that was the end of it. The end of our water?! No water-no life… Wait just a goddamn minute. We gotta get this shit sussed out.

Provincetown, MA, the week before Women’s Week, is not gentle (there were storms…wow!) but not necessarily violent (see below for calms).

We aired our dank settee cushion covers and got ourselves ready for the next phase.

The town offered the welding we needed (see prior post) but not the electric motor specialist. We had to move on. Onset, and then New Bedford.

Our auxiliary motor, the Yanmar 3GM30, has a boost pump fitted between the bilge-mounted diesel tank and the fuel-water separator. The bottom of the tank is marginally at-or-just-below the lift rating, called the “head”, of the motor-mounted lift pump and someone clearly thought some more pressure would be good. That boost pump failed the morning we tried to leave and we discovered both that it’s not completely necessary and that it’s not completely dead. Weirdly, the engine runs better at mid-system RPM with the boost pump fritzing out and rougher when it fritzes in. (Yes, actual info about this phenom would be quite welcome.)

We left a bit later than we hoped, but we made the fair current at the Cape Cod Canal nonetheless.

We needed to deliver the watermaker motor to the only place we’d found that wouldn’t involve renting a car: Northern Electric Motor Co, in New Bedford, MA. So we set off for one of our adventures of course.

We walked about 45 minutes to the New Bedford Connector bus at the mini-mall (James carrying the heavy-ass motor), got breakfast at the Stop and Shop, and hopped aboard the bus at $1.50 each. When we got to New Bedford, I (Dena) requested the first safe stop and we got left at the side of the road, only a mile (ha! carrying that weight!) from the motor shop.

Bill met us, heard us out, and understood. He became increasingly engaged until finally, as we were leaving, James said, “I’m just so happy. This is amazing. A stand-alone motor shop!” Bill went all to glowing and we left before anyone could get too sappy.

When we got back (a long bus ride and then a long shopping for groceries while later), it seemed like leaving the next day was a sure thing. We were on our way back to Cetacea in the dink when Dena got a call from Bill at the motor shop telling us that he had repaired our motor and it was ready for pick-up.

Then I (James) got sick. I mean really fucking sick in a way that nobody likes to talk about. The kind of sick that I like to bury so deep in my memories that it’s best we leave it right there…. But I’m not going to…I was rude-sick…I was stink-sick…I was, well, you get it. I woke up the next morning with visions of sailing to New Bedford, picking up our watermaker motor, and doing that repair but instead I shit and puked my fucking guts out.

And I (Dena) did the trip to New Bedford again. It’s stressful to be away from a sick partner, and I hadn’t charged my phone the night before so had to keep it off most of the time. I missed the fist bus, or the bus missed me…I’m still not sure which…and so I oobed to the grocery store where I picked up the bum-fuck-connector-bus. Back at the motor shop, Bill told me that someone had used that motor hard. The brushes weren’t toast, but the graphite brush-dust had mixed with the salty boat-damp and some leaked mid-weight oil from the drive unit to create a gummy paste. The warmth from our use of that motor softened it enough for it to flow between the copper coils and…no more DC motor. He literally just did a deep cleaning, oil’d-er-up and sealed it.

Getting back to the boat was a relief, but I knew as soon as I stepped aboard that James was Not Okay. Sick-smell and that abstracted look in his eyes combined to signal that even meeting me in the cockpit had been more movement than he should have been doing. He got sick again right then and went to bed after.

The next day was a high-winds situation. Another boat, Erik’s Allied Seawind Pelican, had anchored rather near to us. He’s a friend of Benjamin’s, which means we’re well-disposed to like him but we tend to look askance at people who anchor close in wide-open spaces. He has a keep-it-simple philosophy, which we appreciate though our practice differs from his at least in the watermaker-arena. If James hadn’t been sick, we probably would have found out more about how we shared ideas or disagreed. That can be really fun, and our boats did look great together in that anchorage.

I found out that he’d put out more chain (and was still short-scoped by our reckoning), so we put out our last 50′ just to have a bit more room between us. While nature did her thing, we did ours.

We tested the motor under no load and it worked.

We laid out all the parts of the watermaker system. What Bill at Northern Electric said about someone using this thing hard got us thinking. The instructions for the PowerSurvivor call for a seal repair kit every 1000 hours. Who knows when it had actually been done last. The installer hadn’t put in an hour meter. (Yes, we did.)

Just like what Bill said about the motor, the pump was dirty. Silicone lube is the only type you can use in an application where it can/will come in contact with the R/O membrane, but clearly that stuff gets dirty like any other lube. We took it all apart, very carefully, and then we cleaned.

Not everything came apart easily, as you can see from those broken bits in the picture above. That’s the seal in the wiper for the piston shaft. Yes, we did have a replacement in the kit.

The drive unit was the real question mark. Katadyn says that you can’t take the oil-filled drive unit apart without replacing it altogether with the $500 replacement (a greased-bearing version of the elliptical drive and yes, I do love this language). When we took the drive unit apart to try the motor under no-load conditions, we were deeply concerned by the disintegration of the reddish plastic seal that holds the piston ring shaft in place. The merest smidge of the broken piece is visible in the otherwise empty groove shown below.

Since we didn’t have a replacement and didn’t want to pay $500 and stay put 2 weeks for shipping, we winged it. A redudant o-ring for the filter housing was easily cut to the right length. Just long enough to seal the oil in, just short enough to allow the pin to nestle within that groove and hold the piston ring shaft still while the piston did its piston’y thing.

These watermakers are a hell-of-a-lot more rugged than most people believe but we really did drive this one to the very end. But they are build using that world-famous Eli Whitney invention…Interchangeable Parts! And we’ve always believed that if it’s built by humans from interchangeable parts it’s built to be repaired by humans…that’s us. And we did…and now we have a totally working watermaker not from belief but from the work that we did.