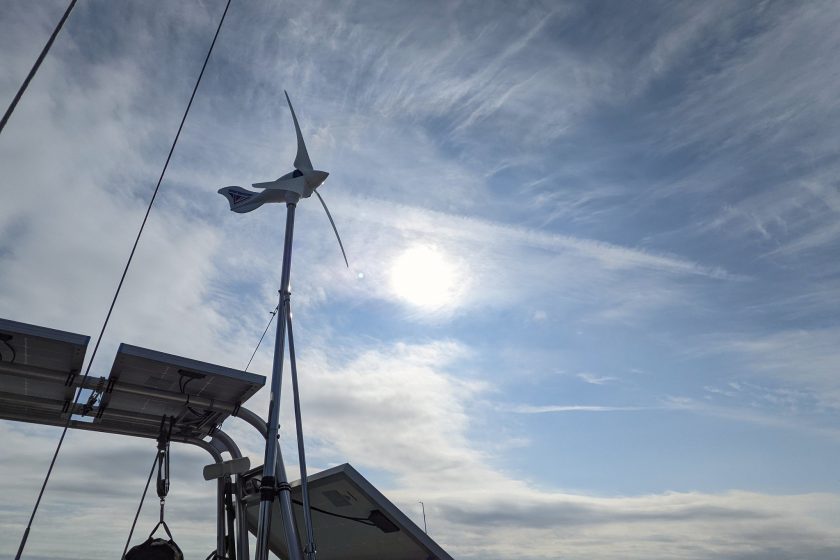 I (James) was really stoked about this next part of the adventure.

Not only could I not wait to use the watermaker again, we were sailing to a place we’d never been before. I mean, yeah, we’ve anchored a lot in Buzzards Bay all over. We’ve even anchored off Naushon Island (on schooner Mystic Whaler on the Eastern side of the island) but this was me feeling things anew. For one thing, I wasn’t sick anymore and that felt great. But the best part was we were moving under sail once again relative to the rest of the multiverse and I was simply amazed to witness it all.

The wind, the waves, the current were all with us and we bowled on to our evening’s anchorage with all the power we could muster. It took less than three and a half hours before we were anchored in the cool clear waters of Kettle Cove between the islands of Uncatena and Naushon in the Elizabeth chain.

James wasn’t the only person happy to get to this new spot. Beluga ran around the deck like he does at night when he feels safest. James and I (Dena, in case there’s any confusion) are thrilled to enter a strange cove and find it empty, and Beluga might pick up on some of that. It was a lovely evening after a short, easy day.

Shyte and Briney in the morning, we were underway on glass by 0700 pointing the boat at 268 degrees magnetic to Point Judith Harbor of Refuge. A place we know so well.

Our friend Jimmy has more salt in his blood than any other man we know so when he tells us he’s sailing to Point Judith Harbor of Refuge to raft up and have some drinks that’s pretty much what’s going to happen. He was sailing out from Noank on his Crealock Pacific Seacraft 31, S/V Imari. When we left Kettle Cove Jimmy asked me when we thought we’d be in Point Judith and I told him my standard answer…Like the Cable-Man between 2:00 and 6:00. If you rely on us to be some place you kind of have to fuck your whole day to make it happen. So just about sunset Jimmy pulled up single-handed to our port side (to which we list a little), presenting his starboard side (to which he lists a little) and a plethora of fenders in all shapes and sizes. His slow approach was perfectly done, never stressing us out.

That’s saying something when someone’s driving their boat directly at ours!

Because our lists were bringing us closer together and Imari has outboard chainplates, the view of the rigs was…disturbing. We moved him a little aft and all was well in the multiverse once again.

The sunset was gorgeous and we very much enjoyed the conversation. It’s so rare for us to have anyone aboard, let alone have someone meet us on their boat, and rafting is very close to unheard of for us.

All those factors made it that much more fun to do. We all got up early the next day and Jimmy was motoring off by 7am.

We tried to leave right after, but our flaky diesel boost pump died altogether and we had a terrible time getting the engine started. When it did start, the belts screamed bloody murder so we shut it back down. There was no looseness, so we figure the alternator just had a lot to do after cranking the starter so many times (and yes, letting it cool down between times). With the fuel primed and the house bank helping the starting bank, we got it running again on the first try.

Damn engine is the number one headache on Cetacea, and a heartache as well for a couple of people who don’t want to pump fuel ever again. Going electric is a big investment in both time and money, but we’re closer and closer to biting the bullet and making it happen every time this kind of delay causes us to miss weather windows.

That’s what happened. Once we got out of Point Judith, we were running behind our plan which meant that the southerlies came up while we were still exposed in Block Island Sound. We started out full sail and pulled the first reef after a few hours. LoveBot wouldn’t steer correctly, to my utter consternation, and I realized that the gears had jumped at some point when the rudder had broken, but we hadn’t noticed because of the more obvious problem. We were going to need to anchor for a brief while, and then maybe…just maybe…we could continue on and catch the fair current through the East River the next morning. That had been the plan – a windy and rainy Monday so that we could get through New York Harbor and catch the two days of westerlies down the Jersey Shore and outside the Delmarva Peninsula.

When the first of the expected squalls ate Fishers Island right in front of me, I (Dena) asked James for the second reef and we rolled in the yankee. Down to our tightest configuration, staysail and double-reefed main, we were in control but beating our way uncomfortably into Fishers Island Sound. The squall raked us with driven rain and blew on by, but it was only the first of a bunch we expected for the day. With both of us wet and Not Having Fun, with the prospect of hand-steering ourselves exhausted, we decided to let the Tues-Wed westerlies happen without us.

Hello, Stonington. This is where we will fix our shit, yet again.

Now we get to pull the Monitor top-end apart and re-align the pendulum gears then replace the pick-up pump for that disgusting diesel engine…then something else will break and we’ll fix that shit as well.