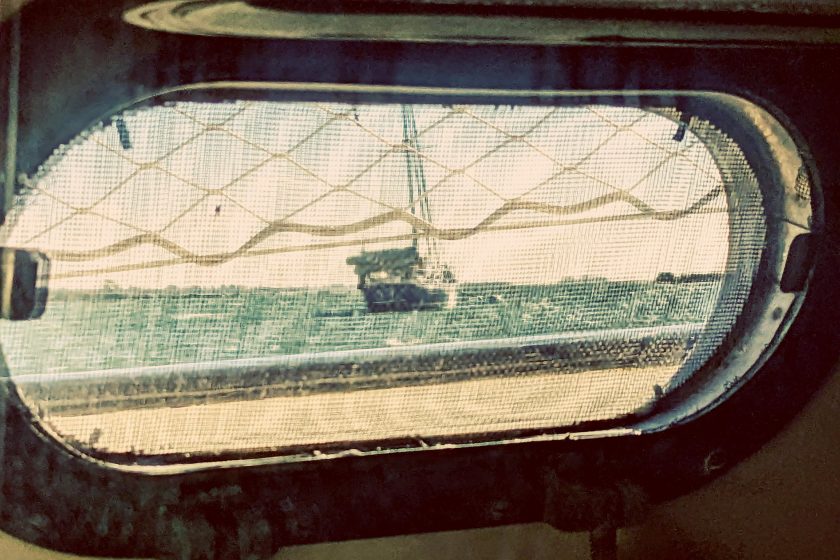 Stonington, Connecticut, has a really shitty anchorage! Like in most of New England, all the good anchor spots are littered with moorings, most being empty this time of year. But Stonington is a special kind of shitty. The town is protected from a substantial Atlantic Ocean roller by three breakwaters. One is south of the town waterfront about a half a kilometer offshore.

A second breakwater about the same size as the big one offshore is located west of town protecting the village from those big sou’easterlies that roar up Long Island Sound in the summer. The third one is much closer to town and protects the inner harbor and all the marine industry. The one place left for a traveling sailboat to anchor isn’t protected by any of the breakwaters. It’s wide open to both the aforementioned weather elements that used to make it a crappy place to live.

With a dead engine and a fucked up self-steering system our choices were pretty limited. Fortunately for us, our friend Jimmy (the same guy who sailed up to Point Judith in the last post) was happy to help us out.

We had two days of intense weather at anchor from all the directions left unprotected by Stonington’s fancy-schmance breakwaters, so we ordered a new (and a spare) fuel pick-up pump off the internet and had it sent to Jimmy’s place in Noank just a few clicks up the highway.

The Monitor project came first, since it shouldn’t (please) require any parts. I (Dena) was worried we’d lose the circlip that had to be removed so that we could take the lower teflon bearing out. Once that bearing was out, we’d have full freedom to realign the gears.

In preparation for the project, we pulled out the bag of Monitor spare parts. Not only did we have a half-dozen of those circlips, we even had a replacement for the worn-down bearing!

In the ridiculously rough water of “protected” Stonington harbor, not only did I pop that circlip off and lose it right into the water, the shitty multi-end circlip plier set came apart while I was trying to use it and bits of it sank as well. Moving on with gritted teeth, I made do with a tiny set of needlenose pliers.

Once the Monitor could move freely, we realized that there were two alignment issues. Fixing the gearing still didn’t make the rudder face the right direction! The whole rudder assembly meets the hinge by sliding up into it. A nut-and-bolt squeezes a gap to clamp it into place and that thing was completely loose.

I put the bearing back in (with two washers that had been missing when I took it apart) and then did an irritating amount of thumbnail wrestling of the new circlip. I only lost one more to the sproing and the heaving of the dinghy under me.

James handed me a monkey wrench and eyed the angle while I turned it a bit at a time and then, voila! Everything was lined up correctly. I tightened the bolt to hold the rudder in place and got out of the dinghy as fast as I could.

On the day our package arrived, Jimmy was nice enough to take us out to lunch and let us shower at his place, which is always a welcome thing for us. We had another enjoyable visit and then he dropped us back so we could get that new pump installed. For an engine project, it went pretty well, right down to bleeding the air out of the system at both the filter and the fuel injection pump.

The next morning, we took off with the current and motorsailed on glassy water to a hint of protection behind Tuxis Island off Madison, Connecticut.

We’ve been focusing on hitting new spots, and the weather cooperated by giving us northerlies and easterlies. Most of the places we’ve been are all about protection from the summer’s prevailing sou-westerlies, so the weather has nourished our sense of adventure.

The next morning, we woke bright and early again for the flood. The engine dry coughed and we cussed our way through bleeding yet more air from the fuel injection pump. Finicky things, these diesels, and we’re fucking over it. Once again, we got underway later than we’d planned and missed some of the fair current we’d been counting on.

I think we’re at least 6 weeks behind where we’d be without all these engine problems and what if we had made it to Europe? Dealing with all this while in foreign countries sounds like the very worst way to spend our limited cruising time in Schengen countries. The vibration is hard on every damn thing, the noise and smell are noxious, and the cat hides whenever we start it up. There’s nothing, at all, to love here.

Luckily for us, the wind came up that morning and we were able to shut that fucker down and SAIL!

Outside Milford Harbor in what they call “The Gulf”, we anchored several hours before the rains hit and we quietly sailed this boat all the way into the anchorage. We’re sitting here still, letting the bad weather pass us by, peacefully at anchor.