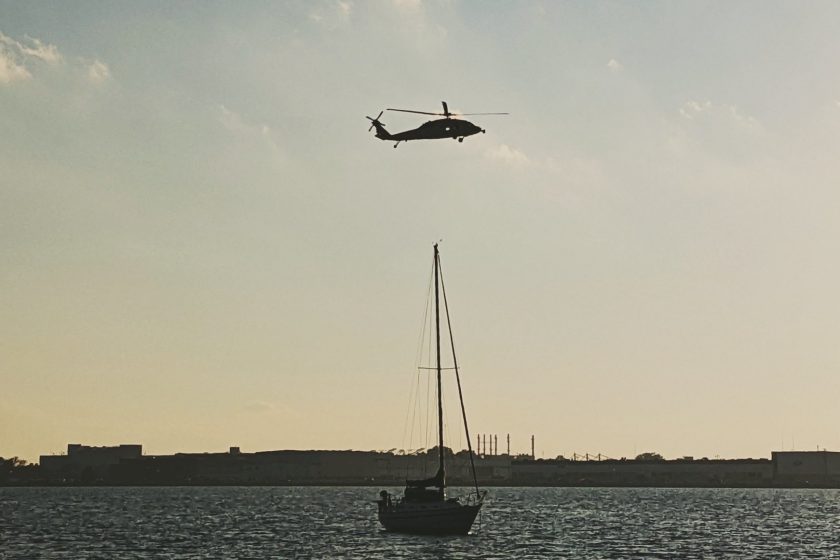 I (James) was sailing at night on a black sea of choppy gremlins sneaking across my bow illuminated by the insane but receding Atlantic City. From the time I popped my rib until it was impossible to stop, from there on out it was about being as relaxed as I possibly could. As awake as I possibly could be. As hands-off as I could be while not fucking up. Cetacea (and Dena’s trim) performed to perfection. The boat sailed a straight line south down a stereotypically sloppy Jersey Shore and it’s almost as if Cetacea just begged me off of trimming any sail and fucking us up all night long. Have I mentioned that I fucking love this boat? I know that I’ve mentioned loving Dena and her trim!

The multitudinous stars were alive that night and I can’t remember seeing a single satellite…not a single one. How weird is that, Elon?

It was the last possible moment for a comfortable and safe ride into Cape May, and James declined. He took his first short watch and I came back up at 0700 in a grey-light world that soon grew a sun.

The second go-no-go point was for heading up the Delaware, but James had found a comfortable mix of cat, anti-inflammatory and painkilling pills and he wanted to keep going. He was mildly bewildered by what looked like a bunch of boats rendezvousing right next to the ship channel going up the Delaware, but I took the next watch before they revealed their purpose.

In weirdly modern fashion, I watched a group of AIS signatures hover at the edge of the channel, as shown on the chart, until a ship went by. Then I watched those signatures bolt across like ducklings across a busy road and take up a staggered course heading, along with us, down the Delmarva peninsula.

We started to catch their radio chatter and realized that yes…it was a rally or educational trip of some sort and that no…they weren’t at all our type of folk. I mean, who chooses to be within several hundred yards of another boat when you already have the wide grandeur of the world’s ocean around you?

The wind began to ease, which meant that we had to bring it more abeam in order to get force and stability from it in the still-sloppy swells. We weren’t able to go as far downwind and so we planned out how we would head out to sea and then gybe back toward shore. It was a good day of sailing, but definitely that kind where you’re never quite pointing the boat at the place you want to end up.

We did the half-shifts in the noon hour so that we’d swap night watches, but that didn’t work out quite so well as usual for James because he ended up getting neither sunset watch. We’d come south enough that the sunset actually happened 8 minutes LATER than the day before so I (Dena) got the show all four times. In autumn, that is not something most people experience. What a visceral message about how much we’d changed our position in the world!

Then it was my (James’) turn to conquer the flattened waters of the southern Delmarva Peninsula from Assawoman down.

The same group of ducklings hovered to shoreward as we (like we do) went just a little slower than the greater waterlines before us. And fuck a bunch a that shit.

The sun rose on another day and we entered the Chesapeake Bay from another way. A way we’d never entered before.

Going in through the out door of the Chesapeake motherfucking Bay we were still about six hours through Hampton Roads to our destination for the day. We’ve been to this place…so..many…times…before! We’ve even called this place home. We have a greater local knowledge of this place and this time it felt different somehow. To me (James) it felt like war and I’m too old for this, I got a broken-fucking-rib.

There were two smaller war-ships heading out as we entered the pinch of the bridge-tunnel between Norfolk and Hampton and one huge Japanese ONE cargo ship. We ducked in behind the big pink ONE and Dena took the helm for the approach to Willoughby Bay, that aforementioned past home.

We entered what we think of as a wide open and empty space to find a tri-moron and the 6-strong Cylon fleet of catamorons along with a handful of regular monohull cruisers fleeing winter. Still, it’s a big space and we found a good place for the anchor, which James discovered to be as foul as I’d guiltily warned him it would be…perhaps muddier than he’d expected.

Anchoring took a toll on his rib and so we’re spending a few quiet days being buzzed by the ubiquitous helicopters, the crew transport vessels and sundry tug-pushed barges moving concrete. We’ll get some groceries and showers, then get back underway.