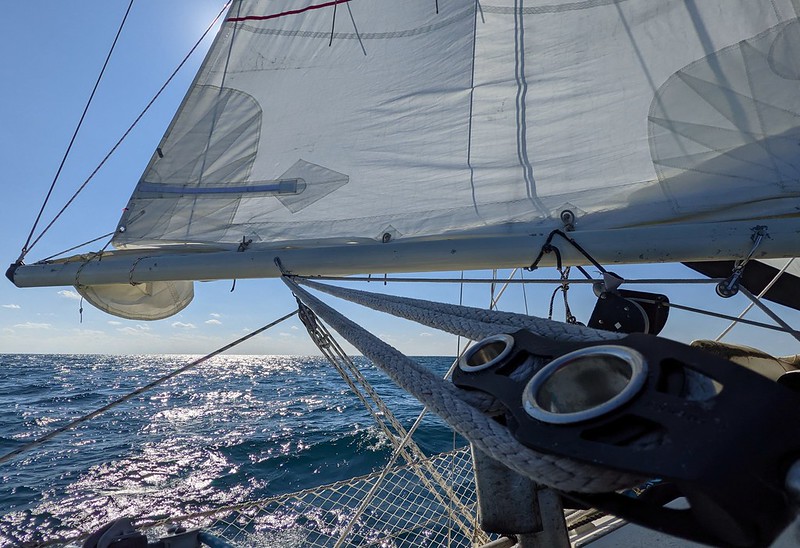 Beaufort was a terribly tight anchorage, which is what we’d heard and why we’d chosen the dubious charms of Morehead City each and every other time we’ve come through the area. We watched the weather carefully and, along with a whole bunch of other cruisers, decided that the weather looked good for leaving on Wednesday, November 16. We were going to aim at Florida and, by sticking close to the coast, have multiple options for inlets once the weather started getting ugly or we just felt like stopping. Unlike most of the others, we waited for the seas to lay down a bit and took the beginning of the afternoon ebb instead of the last of the morning one.

We finished the engine exiting the bar from Beaufort and the boat rose to the occasion. We were full sail for most of that night but as we approached the northern reaches of a cape called Fear we started shedding sail area like it was female laundry in rebooted Star Trek movie.

That was probably for the best, since we still had uncomfortably choppy seas…steep, quick, no fun…as we approached the southern end of the Frying Pan Shoals off Cape Fear. It was demoralizing so early in the trip and had us remembering our original plan, which was to go inside at Wrightsville Beach and take the ICW to Cape Fear’s south side. Oh well! We were sailing and the boat was driving herself. We could take a bit of a beating as long as we didn’t have to start that fucking engine…and we didn’t.

Things got better on the lee side of the shoals, but we were spooked enough that we didn’t take the straight-line course to the Florida coast. We swooped toward the South Carolina coastline, coming within ten miles of Hilton Head before swinging farther south. That put us in some dead calm waters with gusts of just a couple knots keeping us moving enough to be safe and feel that we could enjoy the ease of it all.

It’s hard to pick apart the experience of spending days at sea. I (Dena) started making notes in an app on my phone but the notes disappeared and I was discouraged enough that I didn’t try again. I know that we reefed and shook reefs, were full sail some but mostly had the yankee but not the staysail out because of how far downwind we were. We nibbled on easy food when it was rough and did hot food anytime it was safe. We made coffee each morning, except the first one when it was so damn choppy.

But we sailed the entire time. We’ve been biting down hard on this electric motor thing for a good six months now and this cruise confirmed a lot of data for us both. A) We can sail this boat in almost any weather and…B) We’ll do almost anything not to have to put the cat through another 17 hour diesel-engine shocker.

Man does he hate that engine!

We kept the first reef in for the last three of the four days, giving us a really nice downwind angle even on the bright and gusty third day’s seas of sloppy nausea.

That night we entered the waters off the Coastal Empire of Georgia. There is a SuperMax ships anchorage about 15 miles offshore between Savannah and St. Simon, Georgia. A SuperMax is a ship designed to go through the “new locks” of the Panama Canal. The “old Locks” could only handle ships up to 1000 ft in length. Those ships were called PanMax ships. The new size limit for the Panama Canal is 1202 feet in length and there are 36 of them anchored off the Georian coast right this minute.

We sailed, well, it was my (James’) watch, so I sailed our home and family right through the middle of that semi-dormant monster fleet of container ships…in the rain. And it took almost exactly three hours. The exact length of my dog-watch.

Lovebot, the Monitor windvane, was engaged the entire time. On occasion in the lightest of winds, a restraining hand on the wheel kept it from bearing off too far in a lull, but overall we did our job and Lovebot did its.

Our on-watch jobs were analyzing the wind patterns and currents, choosing when to reef or shake one, aiming us farther up or down course by adjusting Lovebot, and making sure no one would come out of the empty ocean and hit us. The on-watch pleasures included watching Atlantic spotted dolphin (Stenella frontalis) and short-snouted spinner (Stenella clymene) play with Cetacea’s bow wave. The spotted dolphin were a lot more interested in engaging with us weirdos aboard, but they were also just taking a break from some kind of large-group fishing activity and left us once we’d passed the rest of their pod. Watching the spinners leap was humbling and exciting.

The off-watch jobs were sleeping, eating, and cuddling with Beluga Greyfinger. He really came into his own as a sailor on this trip. He didn’t hide but didn’t go out on deck either. He played with us and rolled around on the floor. He enjoyed a couple of brushings, ate, drank, and used the litter box. The only sign that he wasn’t quite the same as when we’re at anchor was how firmly he demanded to be on our laps or curled somewhere on our sleeping bodies. Again, it’s a two-sided comforting, especially during the taxing times when we come off watch worn out by bracing against the motion of the boat.

We approached St Marys Inlet after dark and decided that we could manage the well-buoyed big-ship entrance even so. Bowling along downwind masks the true strength of the wind but we knew quite well that turning 90 degrees to starboard would come along with full wind and broadside wave action…we knew it intellectually, at least. We started the engine to let it warm up but left it disengaged. (No need to warm up an electric motor…another efficiency argument.) Once actually driving in those strong winds and waves, it became an endurance game. We were so damn close.

And then we were well within the jetties and the water laid down. At the point where the channel splits north into Georgia or south in Florida, we turned up-wind and dropped the main. The wind behind us negated the ebbing current and we slipped down along the industrial brightness ashore. Once past the commercial boat turning basin, boats were anchored everywhere and we slowed to pick a safe route between them. A turn west and another north got us in the mouth of Bell Creek where we dropped the anchor and dropped into bed.