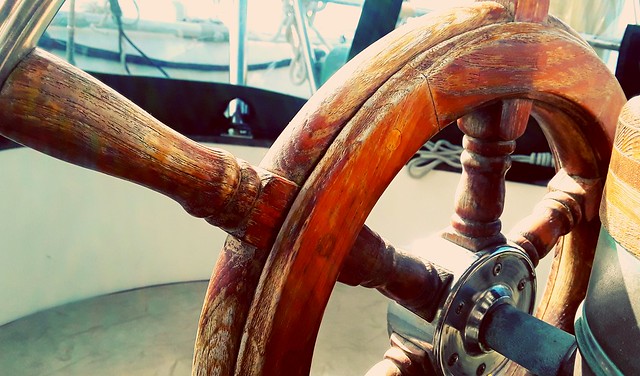 From Onset, we considered going to Newport, but the weather didn’t cooperate and we made a great short sailing day out of getting to New Bedford, Mass.

Loop that for four hours and you’ll know how our day went.

This town sits behind a hurricane wall with a movable gate that can close out some serious weather.

Humans. We keep thinking we can be more powerful than the planet. hehehehe

New Bedford is all about fishing but it used to be all about whaling.

There’s no doubt whatsoever that we would have been struck by the braggadocio in the way this town displays its whaling history, but to arrive only days after our own magical whale experience…well, it was hard to shake off the horror.

We never had been there before, though we’ve been through the area many times. It’s because of exactly what we found, which is similar in some ways to the way the historical plantations of this country honor the slaveholding era (contrary to how Germany treats important sites from the Holocaust).

Just as plantations seem to glorify the lives of white slaveholders, the interpretive signs and displays in New Bedford aren’t reckoning with the terrible repercussions of this historical time of brutal butchery and, yes, general ignorance. Even some of the products of this industry were horrible – whale-bone corset frames and whips were made with the baleen of the glorious animal we saw outside the Cape Code Canal, placidly filtering copopods from the ocean water. Torture made from torture.

So we focused on ourselves and on our other reason for stopping. After a 2-hour marathon session of tech support, being dropped while being transferred, and then getting the right person on the phone, Navico (maker of our Simrad NSS, just installed) agreed to next day air us a new unit as a replacement for our “out of box failure”. This, apparently, is the magical phrase.

It came, it worked, we were done.

And then we got to leave.

Palmer’s Island Lighthouse was the first of the day.

Outside the barrier is another light…

And this was our day in a nutshell. Sailing from lighthouse to lighthouse until we reached Point Judith.

Anyone with sharp eyes will notice that the quality of the light that day was…dark. It wasn’t a terrible day, but it wasn’t glorious either. Meh.

It was better to be at anchor than underway, and we were excited to get to a place that is familiar to us. If you’ve been with us since we headed north in 2012, you may recognize this image.

The wind forecast changed overnight and going against a westerly sounded worse than staying put through the morning. Which opened up some time for a project.

The dinghy still needed a painter so that we can, you know, tie it up at the dock once we’re living at anchor or on a mooring and so that we can tow it behind us if we get the davits off before we have a foredeck cradle system installed. We bought the floating line from Hamilton Marine before leaving, which only left the need to get the thing spliced to the locking snap hook. That is an improvement from the seized shackle, since it can be taken off easily but not tripped accidentally.

And how does that confusing mess of cover and core become this?

Rather than heading directly for Three Mile Harbor by way of a foul wind and then a foul current at the Race, we did a shorter afternoon hop to Stonington.

Sailing down the coast from Point Judith to Stonington is a miniature version of sailing from New York Harbor to Cape May. It’s a relatively flat coast that’s open to the ocean and there are rollers from out there no matter what the wind waves are doing. It can make for some challenging sailing.

With all these fancy tools, the old fashioned, Ritchie Globemaster compass is the most useful thing when being tossed around. The electronic bearing-to-waypoint, the little steering arrow on the Simrad that tells you which way to turn…these things are much confused by the moment when a wave pushes the boat sideways and then sucks it back.

The actual mass of the water that is moving is greater by far than the boat’s, and the boat is actually designed not to fight it. Measuring the height of the wave provides an insignificant number compared to the whole mass of all the water in that wave.

Broad reaching while being shoved around by conflicting waves reverberating off the coast to Sugar Reef Passage, between Watch Hill and Fishers Island, is wild ride. It’s kind of like being sucked through the eye of a funnel as a part of the whole moving sea swirls through an underwater canyon. Where rocks disturb that flow, the water’s energy is disrupted and, oh yes, so are we in our path between them.

We’d been to Stonington by land once and by sea the time James was injured on the Mystic Whaler, but neither did anything to orient us to where we were this time. It was a simple visit, just a lightly protected spot to put the hook down.

But really, we needed to get to the new place, the new thing. As much as we enjoy each other and idling along down the coast, that’s not really what we’ve been doing. It’s been a non-stop attempt to maximize every scrap of travel weather, and it’s gotten tiring even though there have been so many lay-days.

We picked up and moved on through Fishers Island Sound.

These were home waters from the winter of 2012 through the fall of 2013. We sailed strongly past North Dumpling (below) in the only real sun we saw that day, and around the end of Race Point.

We hit the Race just before slack and still…still!!!…it was absolute havoc getting through there.

What we experienced in Sugar Reef Passage was a sideshow to the main event of every tidal cycle in this incredible place. The entirety of the Long Island Sound fills and empties through a four-mile gap called the Race. (It’s nine miles at the entrance to the Chesapeake Bay, between Cape Henry and Cape Charles.) This means everything we said earlier, times ten. It was a violent aquatic experience.

It takes constant attention and constant steering. The power of the slackening wind to influence the direction of our travel was nearly insufficient. We still sailed all the way through, though it was taxing and confusing for me (James), but we never felt truly in danger of hitting Little Gull Island or being dragged out to sea. Just shaken like a fine martini.

Then we were through and the sailing got a whole lot easier down Gardiners Bay in a fog that got thicker and thicker as we headed south into the mouth of Three Mile Harbor which, yes, was completely fogged in. As we came out of the channel, the skies just opened up with giant, drenching rain drops.

That inspired us to head into the closest marina and get dried out.

After much confusion from our counterparts on land we ultimately decided on 3 Mile Harbor Marina to tie our tired lines.

We’re home. We’re always home no matter where we go, only now we get to work ourselves into another community and make our home a part of it.

We jumped right in.