Wow. Allahabad sucks. This is the first town in India that I have honestly just not liked. Strange.

We arrived in town at 5am. A bit disoriented (duh), we chose a rickshaw driver by chance. He said 5 rupees – before he had even heard our destination. I knew from the map that it was close, but…

He piled us and our gear into the little cycle-rickshaw and wow – do we ever not fit. Two skinny people would fit. I don’t know if James and I would fit even 100 pounds lighter, though. Very narrow seats! So we were each half on the seat and half on the decorative wooden side, which pressed painfully into my butt. The driver (rider?) then took us a completely unnecessarily circuitous route, which I didn’t begin to suspect until after I had paid him 20 rupees (feeling bad about the distance). He carried our luggage into the Hotel Tepso, then moped around hoping for more money. Having put some thought to the distance we’d gone, I was put out by him and shooed him away roughly.

The clerk was a drag, the room was whatever, and the phone call we got a couple of hours later (while making up for missed sleep) was a rude complaint that we hadn’t put our passport information in their guestbook. La-di-da, like it’s my job to do your job. So we got some chai in the overdone and overpriced Jade Restaurant and then tried to shake out the wrinkles of the day. We started walking.

We walked quite some ways down a main road. Businesses lined the street, but mostly behind closed doors. This felt more like strip malls than the shopping we’d experienced in India up to that point. Still not enamored of our new temporary home, we just walked along until a man made a beeline to us from a shop door. “Excuse me,” he exclaimed, “but are you from America?” His clear delight and lightly Indian-flavored English were too intriguing to resist and we stopped to talk. He was happy to chat for a few minutes about home – for he lived in Florida, with a green card, working for a department store. He sorely missed Florida and had only come back to India to settle his father’s estate. The father had died almost two months before, and the death was less present for him at that moment than his desire to get back where he was happy. We discussed India in general and then Allahabad and Kerala in particular. He assured us that Kerala was wonderful and Allahabad was terrible and that we would be much happier once we got south.

With our hopes boosted and his ties to the new land confirmed, we parted ways. After that, it was just bad. We couldn’t find the museum – unless the pile of bricks we found had once been a museum. We went to use the internet and the computer James was using crashed twice. James got caught by a “holy” man at the Sangam (the confluence of the Ganges, Yamuna, and mythical underground Sariswati rivers) and paid 70 rupees to repeat a prayer he didn’t believe in and make an offering of coconut, milk, and flowers to gods he’s never met. We waited for an hour and a half to buy tickets out of that place, paying a driver to wait for us the whole time. And the hotel’s proprietor made a big point out of the fact that rooms were rented for 24 hours and we’d have to check out at 5:30 in the morning. 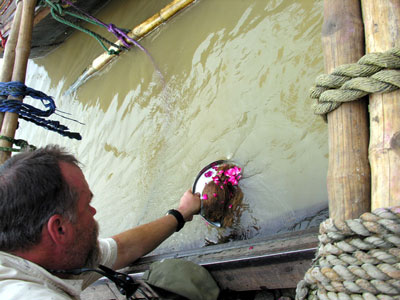 Okay – that’s all very negative, but yes, being out on the river was lovely. It was the first real quiet I’d been able to soak up in a long time. Since Elephanta Island, maybe. When you keep the fan and swamp cooler on high all the time, your world is noisy. The river was cool, breezy, overcast enough for comfort, and the boats looked lovely on the water.

Another fun thing that happened – we had a great thali for dinner (a combination dinner in a large round metal tray with a inch or so high lip, with 8 or so dishes in smaller round bowls) with the best shahi paneer I’ve ever had. The food was great, but even greater was the waiter. He enjoyed us very much, asking all the same questions, agog when told we were staying for a year, and then deeply, fiercely jealous when told we would be living in Kerala. It seems that he has long dreamed of going to Kerala. It is, to him, the most perfect place in India. Of course, he’s never been there, so it’s all hearsay, but it was very important to him. He asked for our address so he could send us a letter and arrange a visit and I told him I didn’t have an address yet. Oh yes, he says, stymied. I asked him for his address and promised I’d write him when we got settled. So our first visitor in India might be Indian!

It was a long day, not nearly as enjoyable as everything else up to that point. James and I both washed three times, sweaty messes over and over, and we finally went to bed naked, without covers. Incidentally, we also didn’t set any alarms.