Oh, have I ever hated children! All of the whining, screaming, sobbing, screeching, happy, sad, bratty, loud, spoiled, and inconsiderate versions of childhood. I spent years without having children in my life except when they were imposing in restaurants, stores, buses, airplanes (the worst), etc, etc, etc. When I realized that their happy noises were unbearable to me…I knew I was right not to have or adopt any. And that’s before any considerations of overpopulation, which I believe to be the source of all evil in that it represents a pushing of finite resources that encourages selfishness, protectionism, isolationism, hoarding and discourages sharing, openness, caring. Even though overpopulation has encouraged exploration, the pressures it creates demand an exploration by conquerers, pillagers, and settlers of already occupied lands.

A billion people, and how many of them under 12? I would ordinarily say too many. Enough that population experts are positing that India’s population will surpass China’s by 2050. Not exactly the best way to make India #1.

But in an honestly foreign environment, where I am constantly aware of my insufficient melanin, sweaty clothing, and complete illiteracy (about which more later), nothing makes me feel better than the reaction of children.

I can’t say that I’ve stopped wincing at the start of a hungry infant’s wail or an angry toddler’s scream. I still hated large parts of the (oh-so-comfortable, air conditioned class, chair car) train ride from Ernakulam to Trivandrum on Thursday the 18th. We’d paid the extra for the reserved seating because it was a five-plus hour ride and we wanted to be guaranteed a spot for our asses. But really, I had a much more enjoyable ride on the wooden bench in the 2nd class car from Alappuzha to Ernakulam. It was more quiet, the children better behaved. Of course, James had to sit above me on the luggage rack, but he did get this wonderful picture… 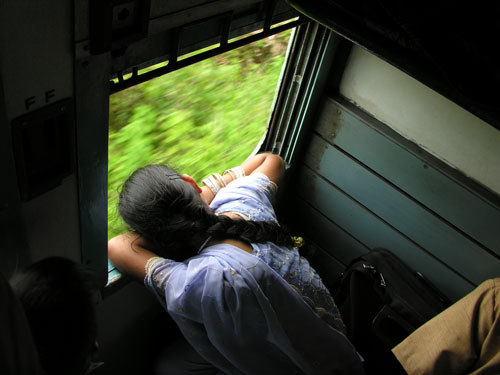 Walking down the street, children from ages four to fourteen are the people most likely to smile. I’ve made a sport of stealing smiles from the unwilling, and I am olympic class, if I do say so myself. But the children aren’t unwilling – they’re smiling first. Actually, they’re running up to us, chasing us down, yelling hello, how are you, where from, hi, your goodname, hello, hello, hello! When they’re not demanding handshakes and grinning at us, they’re sneaking shy looks and grinning at us, or sometimes staring boldly, straightfaced, with awesome focus.

So I like these children because they like me. That’s pretty easy. Who can resist a beautiful youngling who is entranced by your very existance?

It’s not just that, though. Barring the almost unwilling noisiness of the uncomfortable or uncomforted child, I don’t see much bad behavior. The spoiled-ass brat is a rara avis around here, it seems. Parents sometimes try to rein their children in before they see that James and I are into playing the ambassadors with their kids, and they always give in when they see we’re happy to play with them for a bit. But the tantrum is unheard of, resistance is rare, and fighting one’s parents – ye gods! – no way!

We’ve been traveling by pretty much all the methods, and we’ve only dealt with the angry brat scream in expensive train classes. It makes me think of the movie “10 Questions for the Dalai Lama.” In the movie, the first question is, to paraphrase, why are poor people happier than rich people? This documentarian had just spent months traveling India and he saw the same things I’ve seen. The Dalai Lama’s answer was, to paraphrase again, because the rich worry about getting richer or becoming poor while the poor just live. I think he has a great point, but I think he’s missing a facet.

I think that being raised rich leads to bad behavior. If you accept that people in the US are, on average, richer than people in India, and that rich kids are more likely to be assholes, then my experience make more sense. The five year old boy who runs chai to the local businesspeople will never, can never, pitch a fit in a supermarket because he wants the marshmellow cereal. Therefore I like him better. Do I think it is right that he work? Maybe it is. Maybe people are better off in the long run when they learn young that life requires work. Do I think it is right that he experience even one day of insufficient food? Certainly not – I will not argue that poorness is a more moral state than richness, not when being poor and suffering go so often hand in hand.

So while I will not try to convince everyone to become poor, I would like to suggest that the values of the poor make for better children. Work, play, music, stories, creation, serving and being served – these are all things that one can experience whether rich or poor. An eagle eye for opportunity, an impetus to strive, and the knowledge that you live in a world that is not yours – these are experiences of the poor. If everyone cultivated an attitude of stewardship rather than one of ownership, worked hard, and worked toward their goals, civilization could be achieved. There are the latter conversations about good and bad goals, but for now, let’s just stick to the first step.