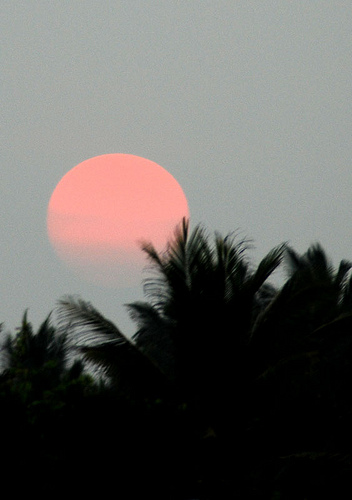 So, on Monday the 27 of October in 2008 in Trivandrum, Kerala, India the rain just stopped, kaput! It was like someone just turned the faucet off. On Tuesday the 28th the sun came out and Dena and I hit the road on our Royal Enfield Bullet headed for the confluence of the Arabian Sea to the west, the Indian Ocean to the south and the Bay of Bengal to the east, the sangam of the three great bodies of water that feed the Indian Subcontinent.

The two of us will use pretty much any reason to just up-n-travel but this time, being our tenth wedding anniversary, the official end of the North East Monsoon and of course the Indian Festival of Light, Diwali, we had our reasons stacked up like a Dravidian temple so off to Kanyakumari, Tamil Nadu, India we went!

We packed light because Dena has to carry the bulk of our load alone on her back while I drive. Two changes of light clothes each, our swimming gear, some water, our travel logs, books and that’s about it. I carried my camera bag around my neck and shoulder and rested it on the gas tank as I drove comfortably enough. Although the roads are riddled with treacherous pot holes the Bullet with two people weighing it down is a pretty stable and slow ride so we took our sweet time and stopped where ever we saw fit to shake off the road and shoot a photo or two. It was a beautiful 80km drive through some breathtaking country side.

Unlike most of the U.S. when you go from state to state in India you are going into another culture and language altogether. Tamil Nadu is no exception to that rule and we quickly found that out when we stopped for our first meal in Kuzhittura just across the border from Kerala. We ordered (what we thought was) our standard fare, two veg-thali meals but the guy taking our order either didn’t believe that’s what we wanted or just misunderstood because what we got was a kind of fried rice thing with some stuff glopped on top of it, it was bad, really bad so we ate what we could, smiled the best we could, said our namaste’s and got the hell out of that place and hit the road again. We stopped a few more times before reaching Kanyakumari because Tamil Nadu has some truly amazing mountains and some of the most unbelievable flowing landscape one could ever lay eyes on, it was an incredible drive!

We got to lands-end at Kanyakumari (or as the English called it, Cape Comorin) at about 4:00 in the afternoon and wasted no time getting a room and setting out on foot for that blue oceans sangam and of course it was everything we were hoping it would be. The rocks leading away from the beautiful white sandy beach were littered with people jockeying for the perfect sunset position and although Kanyakumari is obviously a tourist city every one seemed to be in high spirits in anticipation of the coming dusk.

We walked ourselves raw, found a fantastic old observation tower, watched the show and headed back to our room for some photo editing and some good old fashioned R&R…

Now, Dena and I really do like to park the bike and set out on foot as much as we can so the next morning after an Idly, Sambar, and Chai Breakfast we went on a short bike ride to a little town on a perfectly crescent beach called Culachal. We stripped down to our swim gear and bathed our bodies in the warm Arabian Sea then took off out the jetty for some photos and some drying time.

It is very important to note that if you have white skin and go to a little town in India you have to expect to be heavily stared at, at all times and approached by at least three or four people wanting to know your bees-wax. Most people are very polite for the most part but being the object of inquisition is always a bit disconcerting but a part of traveling non-the-less. As a matter of fact we believe this aspect of our travels to be one of the most important. We believe that we are American diplomats, therefore exchanging information, smiles, handshakes and stories whenever possible is essential to our adventures and will ultimately bring us closer to our global community.

We left the beach at Culachal and went back to the city of Kanyakumari for a huge thali meal at a local hotel and found out that we weren’t in that different of a place, we were just in the wrong restaurant back in Kuzhittura is all. A 14 inch stainless steel plate piled high with as much rice and curries as you can put down for 40 rupees , now that’s more like it!

We took the ferry to the Vivekananda Rock Memorial (the farthest point south in India), shot the obligatory pictures of the tourist stuff but discovered while out there a huge wind power generating plant to the East of the rock and dedicated ourselves to finding out more about it and getting as close as we could get to some of the generators! So we got back to our room showered, jumped on the Bullet and headed East…

What we discovered was a huge wind farm consisting of about 200 generators spread out over about 100 square kilometers in a very rural part of Tamil Nadu. We shot a bunch of pictures of the generators that most people that approached us didn’t even see anymore and ended up going to a beautiful little fishing town of about 1000 people called Chettikulam that we just fell in love with. We drove into town, parked the bike and were of course immediately surrounded by the about 20 kids all trying out their English on us. When we told them that we were interested in the wind-power generators they just shrugged it off as being kind of weird and went on playing around us as if we were a new aspect of a very old game. One of the older fishers of the town guided us around showing us all the good things he thought we should take pictures of, the old-timer, his boat, his kids, his friends et-cet… When we were done we made our way back to the Bullet and discovered upon our arrival a faction of the town’s matriarchy, about ten ornately sari-clad women surrounded by children. They asked us as many questions about us and what we were doing in their town as they could, mainly speaking directly to Dena. One woman wanted to see my camera as if to make sure it was what I said it was. Once the business of grilling us was over and they were all satisfied that we were harmless it was all smiles and happy goodbyes. We took off out of Chettikulam feeling an incredible high, a civilized feeling that we had just made actual contact with real people in a real place, it was wonderful, it was civilization.

We then went to a random deserted beach to watch the sun go down on the festival of light, Diwali, had another incredible meal and made our way back to our hotel.

On the way back home to Trivandrum we tried to stay on the coast as much as possible and because of that it took us all day to make a trip that could have been 80 km’s but that was really ok with us, we were traveling, together, seeing things we’d never seen before and for us that was somehow enough.