Puff chasing, we made our way from Frog Mortar Creek out to Middle River and down to Hart-Miller island.  The wind died altogether as we rounded Pooles Island and, on glass, we motored to our anchorage for the night. 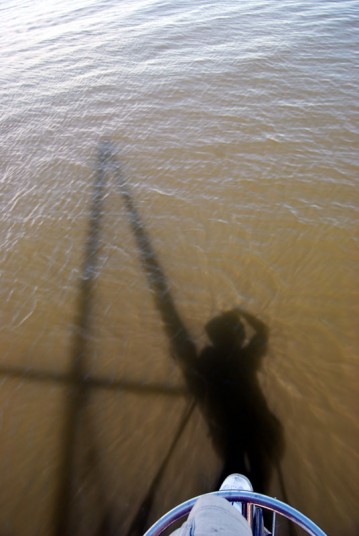 Fairlee Creek is known to be a tricky place to enter.  There’s a nice big red marker and then a flurry of small red and green cans that end just before the pinch.  The pinch being a 90 degree turn into a shallow spot between two beaches that are 20 feet apart.  That part?  We get to figure that part our ourselves.

This is the narrowest entrance that we’ve been through, and we didn’t go through without a small amount of travail.  We bumped, we grounded, and then a nice man waded out to us and asked, “How much water to you need to float this boat?”

Dena’s response was, “Oh, honey, you are so sunburned!”

The nice man was unphased by that comment.  He seemed inured to the pain of red skin.  Perhaps it was a permanent color rather than a summer thing.

He shoved and shoved, and lo and behold, we floated right off that shoal.  Motoring gently, we entered the beautiful bay of Fairlee Creek, where the depths range between 8′ and 5′.

We set the anchor about mid-way through the main bay, maintaining some distance from the black Rinker from which issued cheesy music and screaming kids. 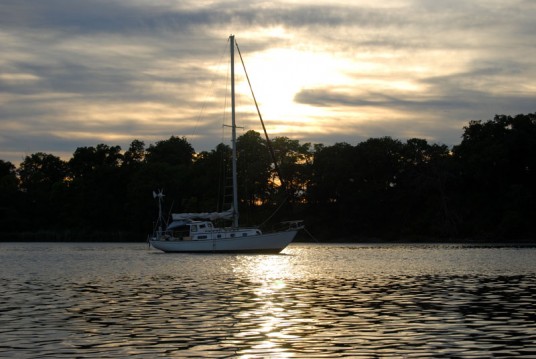 The hot, still air called for swimming, and I was not to be stopped.  When I realized I was starving, James helped me out… 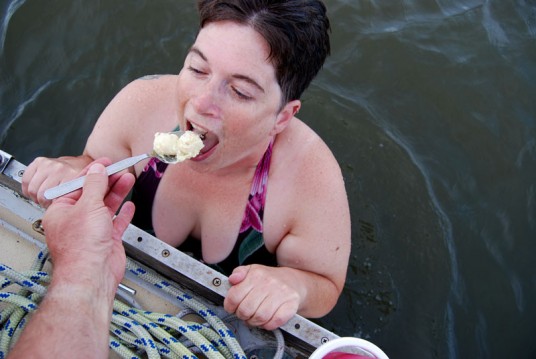 And then he jumped in as well! 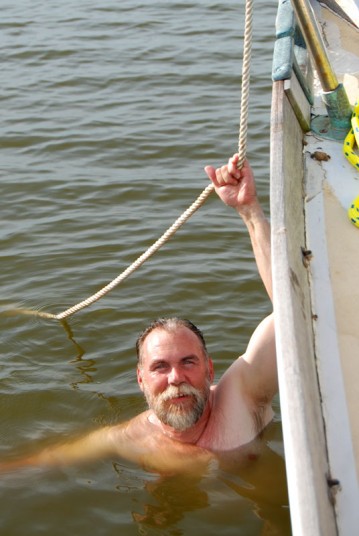 We floated around, swam, and watched the boat turn with the tide.  Happy with our holding, we launched the dink and James rowed us to the spit that hooks around to protect the bay. 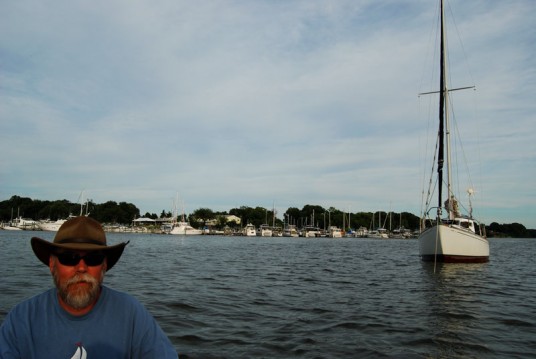 We got out to walk the beach and pulled the dink up on the pebbles of the protected side.  The Bay side of the spit was a rocky, tan sand 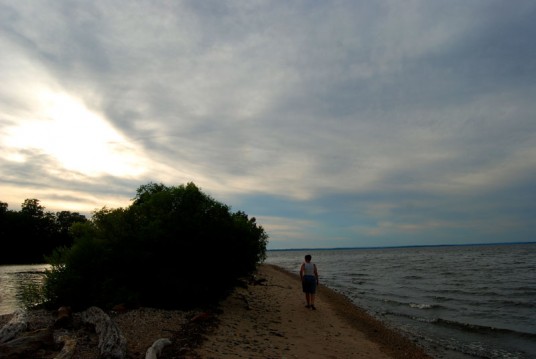 I came back so James could see this weird piece of metal. 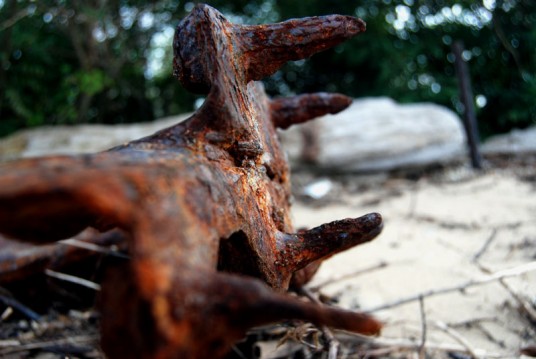 And sat quietly, minding the dingy and letting myself soak up the peacefulness of the place. 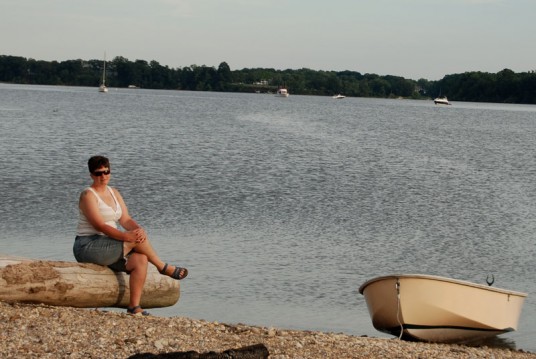 The large sign screaming BAR made us want to slake our thirst and we rowed over for a meal and some drinks.  But alas – the place is only open on Friday, Saturday, and Sunday.  Sigh.

This is what we saw when we came back down to the dock, and the vision was enough to make us happy we gave it a try. 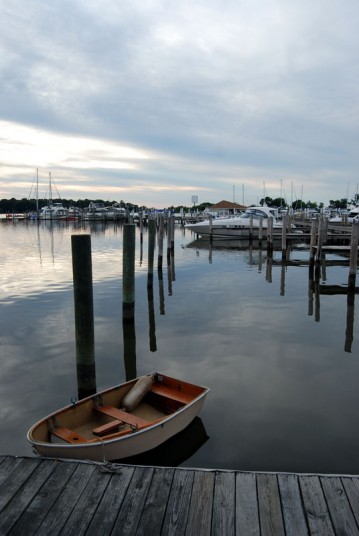 Still water and slight wind allowed us a very peaceful night’s sleep, though it was too hot to share the v-berth.  One in the berth and one on the settee, we slept deeply and well.  We woke at 7am so that we could ride the high tide during the slack current leaving Fairlee Creek and this time, we beat the channel! 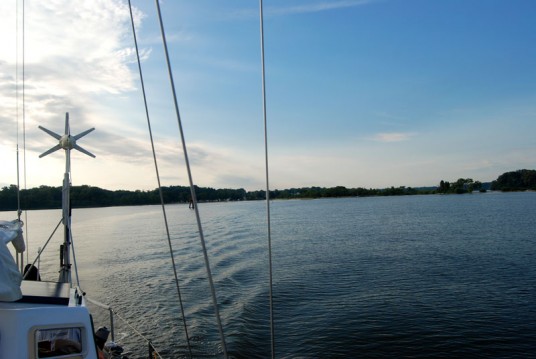 The osprey put on a little show as we gained the red marker. 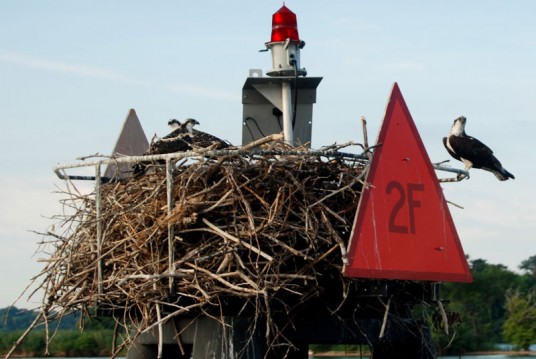 Then we were out and sailing!  We had great wind all the way across the bay, on a broad reach and kicking 5 knots in about 5-10 knots of wind.  It was a great example of efficient use of the breeze. 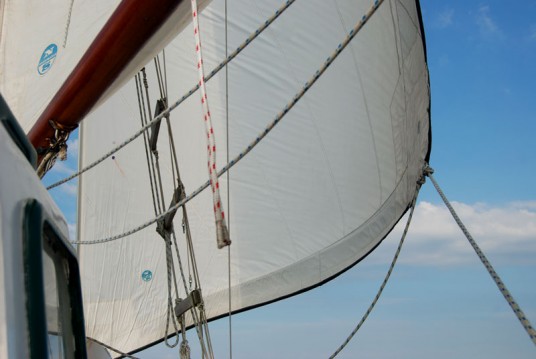 Entering the mouth of the Patapsco River, the wind began to die and we turned to run before it.  We kept the jib up and full until we got past the Francis Scott Key Bridge. 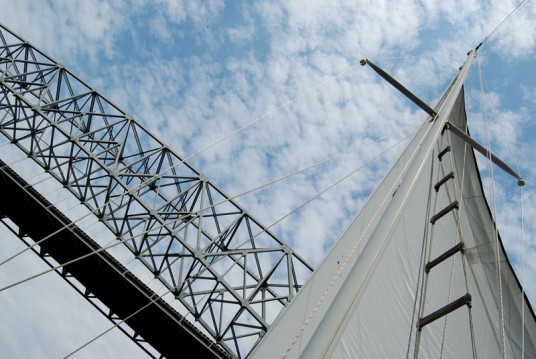 But we had to roll it up and motor before we hit Ft McHenry.

We tied up to the t-head at the dock and rowed our slip-lord’s Boston Whaler to a different spot before taking our accustomed position in Belt’s Wharf, Fells Point, Baltimore, MD.  And here we are, home again home again.