We took off from Onset heading southwest down Buzzard’s Bay.  We’d planned to catch the tide down the bay, but there was an unnatural phenomenon we didn’t take full account of.  When the tide is going out of two bays at once, as in the Cape Cod Bay and Buzzard’s Bay or the Delaware Bay and the Chesapeake Bay, and a man-made canal has been carved between them, there is a suction in both directions.  I (Dena) thought that Onset was far enough on the Buzzard’s Bay side of the canal that we would get only Buzzard’s Bay currents.  When we got out of the entrance channel for Onset though, and turned down the major channel to the bay, we nearly stopped in place.

Dropping from 6.2 knots down to 2.8 knots in seconds is a better than decent clue that the tide is against you.

I pushed up the RPM until we were burning at 2600 and going 3.7 knots, and that was good enough.  Within 15 minutes, the speed started creeping upward.  There isn’t a definitive pinnacle where the tide reverses.  Instead, it took about 10 minutes to cover enough distance for our speed to bump back up past 6 knots.  At that point, I reduced the RPMs on the engine in order to burn less fuel.

A steel grey day faced us with constant rain.  Everything was wet outside, and we did battle against drenching the interior of the boat.  We were doing one hour watches because of the intensity of the weather.  Each time we switched places, the person who went below dried off at the foot of the companionway steps and boosted up the propane heater to dry things a bit.  We really won that war. 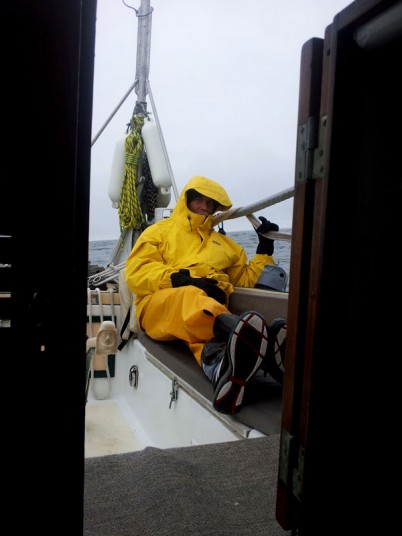 Outside, the winds were variable from 5 to 15 knots from the NE.  In the northern Atlantic, the northeastern wind is notorious.  We maintained a double reefed main and 100% jib, just in case the wind kicked up even more.  But since we were headed SW, the wind was perfectly on our beam, making for an easy ride.  We also had some great deep-bay waves behind us and the full force of the current helping us down the bay.

It was an incredible sail, even bundled in rain gear the whole time.  It was a rare pleasurable experience to sail in the rain that comfortably and confidently.

Reaching the bottom of Buzzard’s Bay and looking out onto the waters of Block Island Sound, the waves intensified and we sacrificed heading toward our goal for a more comfortable ride.  At the last minute, before we passed up Gull Island, we pulled in the jib, dropped the main, and motored southeast into the Cuttyhunk Pond.  As we navigated the incredibly narrow entrance (at low tide, no less), the sky began to clear.  The sun broke out while we were scoping out the mooring field and suddenly, it was a breathlessly beautiful day. 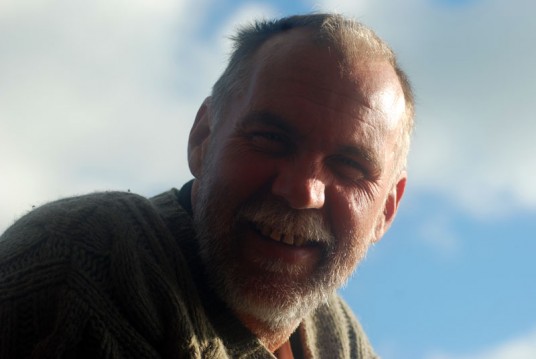 This is a good place to describe how bizarre it feels to approach a tiny island when you’ve been in the middle of the water for a while.  Here we were, surrounded by all this intense water.  We were pointing our boat at the thing – the only thing – we know can destroy it.  A pile of rocks, in the middle of the ocean.  That’s when we really have to trust the technology.  We have a great chartplotter (Simrad NSS7) and two other pinpoint GPS devices (Garmin GPS 72 and Foretrex101).  We have charts and more charts.  We can point our boat at a pile of rocks and hit only what we want to hit – a two foot mooring buoy – missing all of the hard, unyielding bits that fly past while winding through a completely unknown (to us) environment. 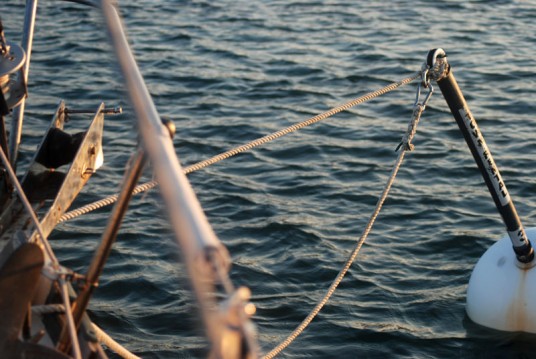 We tied up to a town mooring – one of dozens in the precise square that is dredged in the middle of the pond.  The thought of this place in the middle of summer, when we first thought of coming here, is terrifying now that we’re actually here.  The moorings are so close together that the three boats that are in this mooring field seem close enough.  There is an empty mooring only about 10 feet off our stern and remember – we’re only 32 feet long.  If this place were full of plastic destroyers, each swinging differently with the wind and tide, and we were trying to grab a mooring in the middle of such a tightly packed field of boats, we would almost certainly have given up and gone outside the protection of the island to anchor in the ocean.

This is a really fancy part of our plan.  Looking at the weather from Portland, ME, we knew that we had some great stuff that would get us south of Cape Cod.  Then there was a full day of gales headed our way.  We wanted to be far enough along that the rest of the trip will be easier jaunts while being very well protected for the gales.  Cuttyhunk Island filled both requirements, plus it was a place we wanted to see! 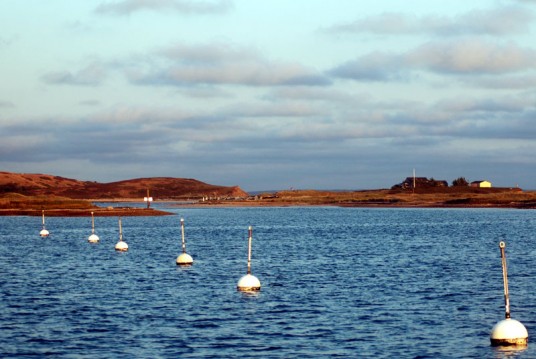 Today, we’re taking a well-earned day off.  It’s gorgeous – blue sky, no clouds, and a ton of electricity.  Solar is pumping, but…did we mention gales?  The wind generator is producing so much power that it keeps clutching off, even with the refrigerator and computer running.  This is unprecedented!  We’re making enough power for everything without having to throttle things back manually – judging our consumption carefully and doing things like putting the computer to sleep when not in active use.  Our systems are working perfectly.   It’s an order of pride and also a feeling of relief.  That we were right about this set-up and our ability to live like this.

So we’re spending the day watching the mooring lines for chafe and watching Star Trek: The Next Generation and Battlestar Galactica.  That’s it, all fucking day.  Reading, watching, fucking, eating, sleeping.  Living the dream. 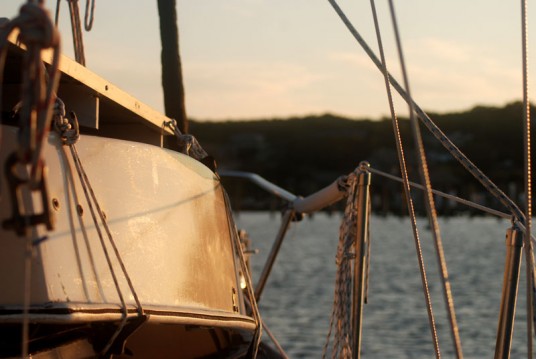