After months of working on this project one and two days at a time we did more work in the last two weeks than was possible in the five months prior.

…But first, we took her out for a spin! 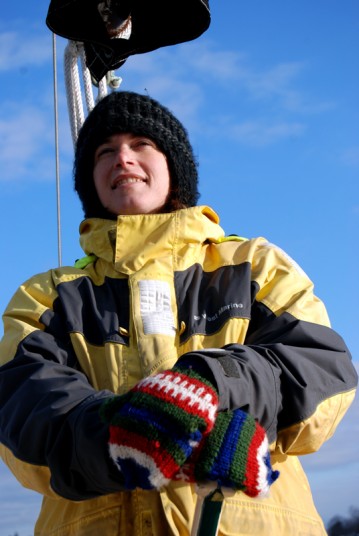 We were pretty good about running the engine periodically throughout the winter and the last time we filled the tank with fuel was in Provincetown, Mass, on the trip down to Connecticut this past fall. So it was time to fuel her up, shake off the bottom and get out of the dock for a little reminder of why we do this shit. 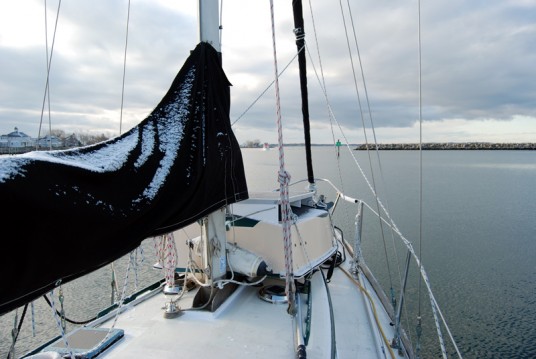 It had snowed the night before and it was brutally cold but that never stopped us before. 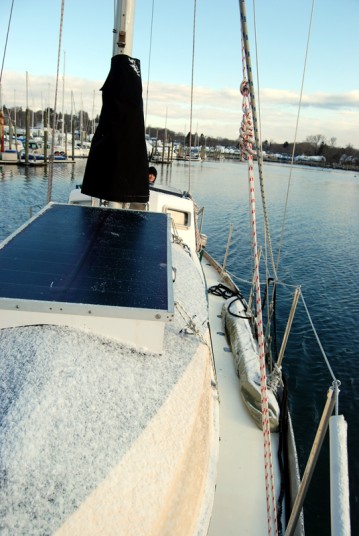 The trip started out calm, crisp, and beautiful but as we rounded up to head into the Mystic River a big squall bore down on us.  By the time we made it to the Brewers Marina fuel dock, yep, it was snowing again.

After joking with the staff about loving the weather around here and this being the perfect day for a sail, we headed back to Noank and tore into the job once again. 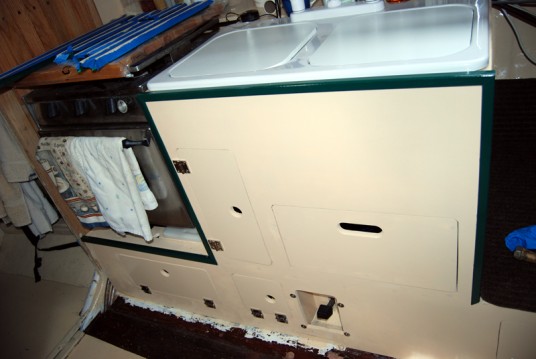 By the end of that day we had the new green trim installed around the new cabinetry and the balustrade painted. 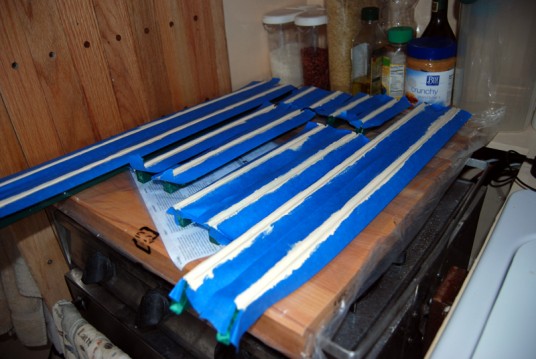 Then we rented a car and ran off to New Haven, Conn, to celebrate my 49th circumnavigation around the sun. It was awesome, we went to the Yale campus to get a look at the Natural History Museum and did a bunch of shopping for the new galley. We tried to get a sneak-peak at Shakespeare’s Hamlet staring Paul Giamatti but of course it had been sold out for months so we headed back to the boat and resumed our labors the next day. 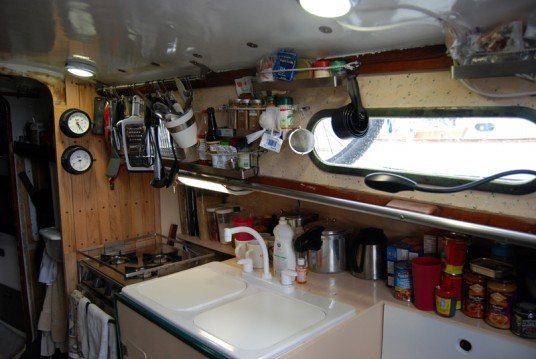 One of the really cool things we picked up the day before was a bunch of new LED lights for the new galley so the first thing we did after making coffee was install our new lights. I can honestly tell you that it has never been that bright in our galley and the best part about it, they only draw .03 amps!

Next, WE MOVED ALL OUR SHIT!!! 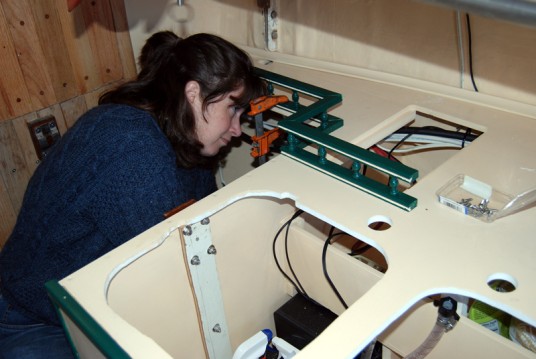 To install the balustrade we had to (got to) pull the sink, the stove and remove everything from the shelving, but hey, we love to move our shit so what the heck!

The balustrade install went well once we found the magic cuss words so we moved on to the new cutting board that fits on top of the stove.

While we had everything pulled apart, we (ahem) replaced the bungs we’d removed last summer and did a fresh coat of varnish on the bulkhead.  Requiring a full sanding… 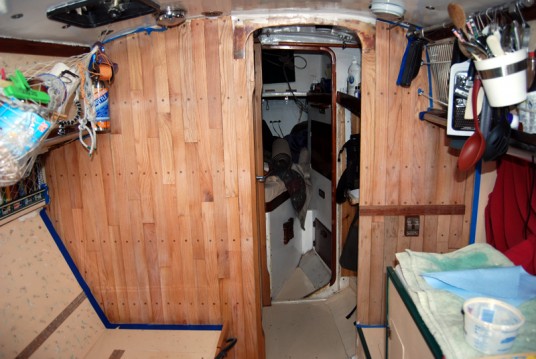 Before the Epifane could be applied. 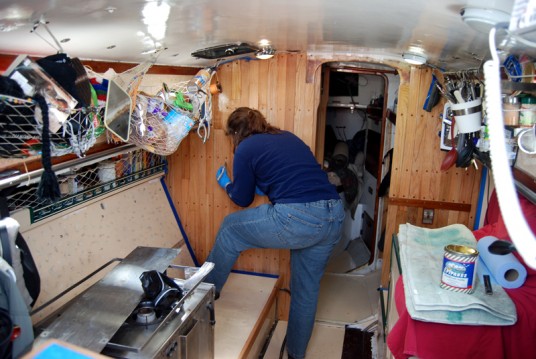 We went to Ikea in New Haven to get the plastic see-through food containers that we built the new galley around and while we were there we found a cutting board that would go on the stove top pretty well. It was always part of the plan to build a cutting board to fit on top of the stove and stow it behind the stove on its own little rack while we were cooking. It was the way we had it set up on our last boat, S/V Sapien, and it was one of those very smart things about the design of that boat that we wanted to emulate on S/V Itinerant. So we did. 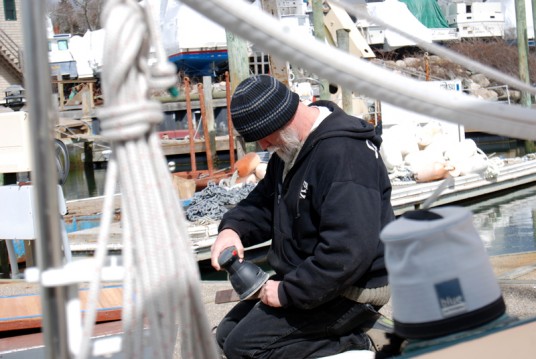 Dena cut and routed the pieces, then I sanded them, then she epoxied them in place and this is what it looked like. 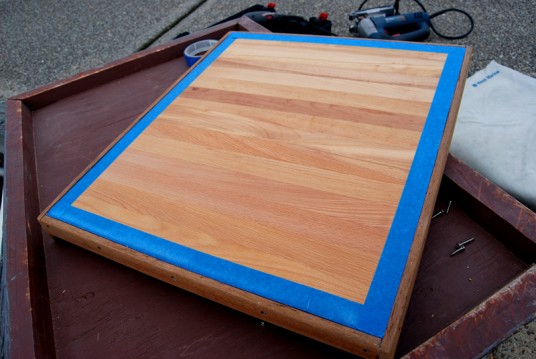 Please don’t get me wrong, Dena made this beautiful table pretty much all by herself.  The only thing I did was sand the pieces before and after she put them in place… Isn’t it incredible?  (Dena’s aside: Except that it was also his idea to do the mahogany pieces around the perimeter and that’s what really makes the whole thing pop like crazy.) 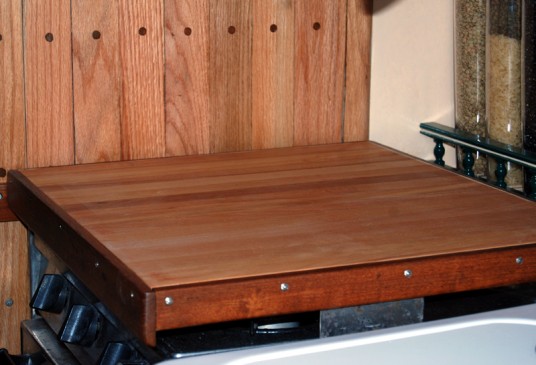 The last piece of this cabinet was the shelving for canned goods.  Eventually there will be cushions so that there’s a seat in front of it, but in the meantime… 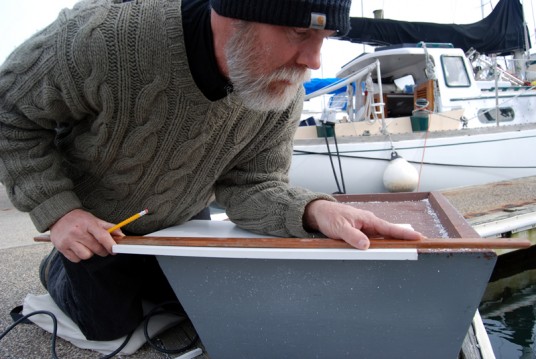 And this is how it all came together. 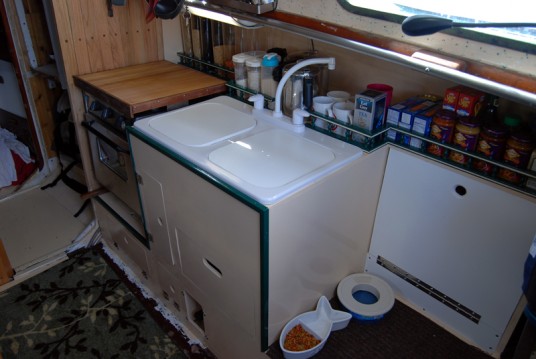