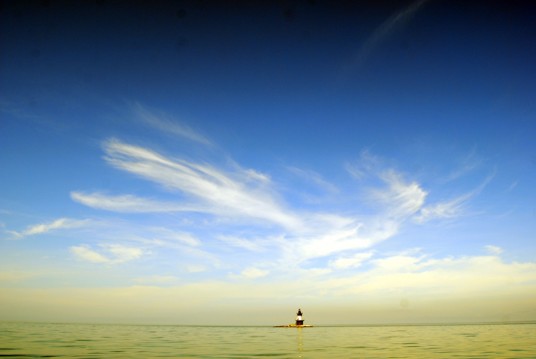 What a lovely vacation!

After quitting our grindingly tense jobs and keeping our noses to the boat-work-grindstone, we took some time to enjoy ourselves.

Threemile was lovely and peaceful until the night before we set off for New London. At about 3:00 am we got hit by a screaming squall with winds in excess of 40 knots broadsiding us and rocking our little home in the Hamptons for about an hour before dying back down before sunrise. After the sun came up we sailed away from Long Island heading back to Connecticut to find our summer fortunes. 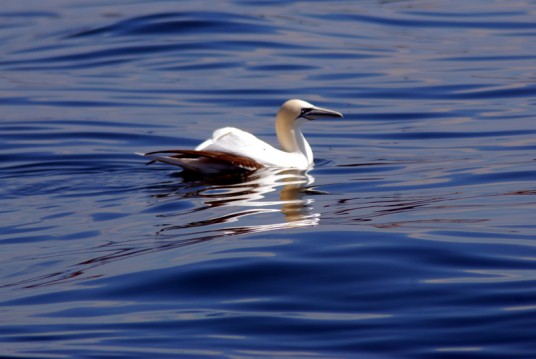 As we hit the deeps of Gardiners Bay, our winds died and some of the local colors began to pop.

We motorsailed all the way across the Sound but as we made our way into the Thames (rhymes with, me, James) River our spring winds kicked back up to bring us into the downtown free moorage. 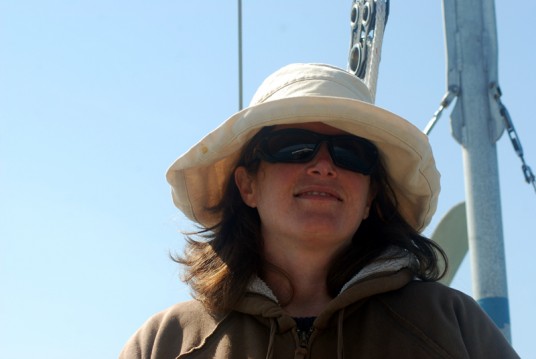 Our plan was to shag some free showers at the public moorage using the key-code that we got from them last summer. The key-code worked but the city of New London hadn’t turned on the water in the showers yet. Damn!

So we (Dena) did a little research and found out that we could transfer our gym membership from Groton to Waterford (which is about a mile from our new marina) online so she made that happen and we motored back down the river to our new digs. 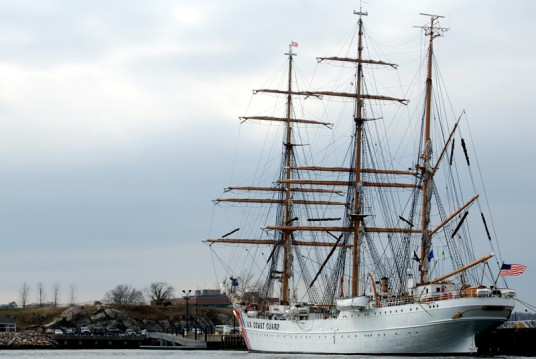 On the way down river to Burr’s Marina, we got a good look at the Coast Guard training vessel S/V Eagle. I recommend you google that ship if you don’t already know about her. She’s got an incredible history! 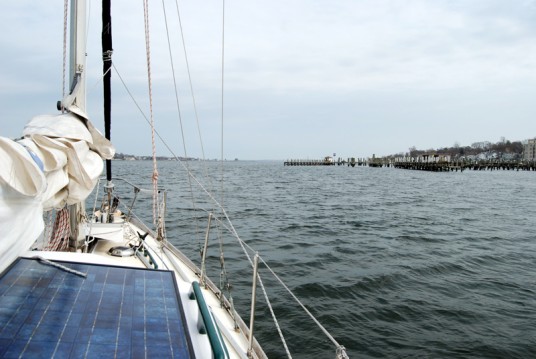 We buried the CQR in 8 feet of water, launched the dink, and struck off on our bikes (we’d dropped the bikes off at the marina last week) for hot showers at our new work out facility.

When we got back from the gym we ran into Bill, one of the guys that works at the marina, and he told us that we could bring the boat into the marina to wait out the threatening storm if we wanted. We thanked him but declined, telling him that we felt pretty good about our anchorage.

On Friday the winds were from the north-east ranging from 25 to 30 knots all day long with gusts kicking our little butts in the 40’s. The pounding seas were ranging from 5 to 6 feet and, let me tell you, at anchor that shit is a big deal! It was a painfully long day but we lived through it and only (ONLY!!!) dragged our anchor about 60 feet toward the scary lee shore. At about noon I went out on deck to put some chafing gear on the anchor bridle, which meant I had to bring in the anchor chain about 10 feet. When I payed the chain back out the anchor came unstuck for just a few seconds, long enough to drag us to lee and freak us (the fuck) out! Although the anchor re-stuck and we didn’t move for the rest of the day we were shaken up quite a bit from the experience.

On Saturday we pulled up anchor and went into the marina to fill the water tanks and deal with some issues that were bothering us about the water tanks. We ran into Bill again and he told us that we could stay in the marina until our mooring was put in the water. We thanked him but told him that we love being at anchor so we’d head back out as soon as we could. 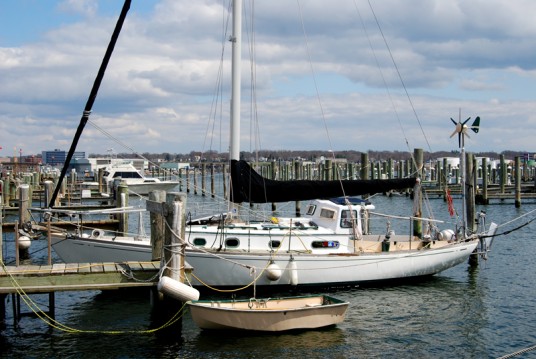 Of course, we thought of some errands to run while we were so accessible.  For the first time, we’re very, very close to a propane filling station – only about a half mile!  Once the marina really gets up and running (we’re at least a month early compared to their usual season), we’ll have laundry and showers on the dock, propane just up the road, and a gym and grocery store not much farther.  For us, with the bikes and trailer, this is pretty great.

The next phase of this spring is earning some money.  Since I (Dena) am keeping myself free to work on the Mystic Whaler and James wants cash in hand asap, we’re going the temp agency route.  That’s the short term answer, but James also plans to do the feet-beating job hunt.

It feels a bit like we’re at the end of a nice long vacation, though we worked so hard through so much of it.  We’ve been on our own time, working on our own projects, and it sure has felt good.  This is a cycle I can live with – sail, get a job, save money, work on boat, sail.  Hopefully the sailing portions will eventually be longer than the others, but hey – it’s still living the dream.