One last sail! What was I thinking!?

Okay here’s what I (James) was thinking: If you’re a fan of this site you probably know that we’ve had our boat for sale for quite some time. Well, we’ve had some pretty serious potential buyers as of late and this time I really thought that one or two of these guys just might put some money on the table before we even had a chance to move the boat to another location. Well, two days after we blogged “One Last Sail” one of the women from the office of the Boston Ship Yard caught up with Dena in the marina lounge and told her that if we were going to “take advantage” of all the amenities that the marina had to offer we were going to have to pay like all the rest, the going transient rate… $75.00 per day

There is no way in hell that we’re going to pay 75 bucks a day to park our dinghy on the end of a (falling apart) dock just so we can use a (shitty) shower three times a week!

That evening we went for a bike ride to spot potential anchorages and found a few promising sites that looked to be a little closer to my new job so we decided to weigh anchor the next morning. The two potential buyers that I’d been talking to just kind of evaporated into non-responsive-email-land so we pulled up the hook and went exploring for our new digs.

We sailed east from East Boston into Boston Harbor proper with two reefs in the main on a starboard tack in about 18 knots of freshening breeze, it was incredible! It was a warm Saturday morning so of course there were boats all around us. There were packed ferries with pointing gawkers with plastic-destroyers jumping their wakes, there were multimillion dollar cruising sailboats going out for their one sail this year and there were tons of pretty little sailboats over stuffed with friends-of-the skipper wearing type-I PFD’s and looking a little purple.

About two hours into it we decided to get out of the summer traffic and get serious  about finding our new home. We went back into Boston harbor and looked over the one site that we found that was most promising, a snug little spot right next to a water taxi dock in front of a large rehabilitation complex in Boston’s Shipyard Park.

The day before when we were riding by on our bikes we spotted a guy rowing up to the water taxi dock in a very nice little home-made dinghy. We waited for him to tie up and as he came up the gang plank we asked him where he had rowed from. He told us he’d rowed across from a marina in East Boston and he never had any issues with parking his dink on that dock. We ended up talking to Jake, the guy in the dinghy, for quite a while getting the low down on a few potential sweet spots in the area.

…Anyway we sailed straight back to that snug little anchorage and buzzed in to check the depth and it looked pretty good. On a whim we figured it couldn’t hurt to sail up the Mystic River, being as though it was so early in the day, to see if there were any other sweet spots before anchoring. We found a little spot just behind a college in Charlestown that had a dock that looked like it was never used by anyone but fishers so we pulled up, tied up and went up to the top of the dock. We found a sign that told us that this used to be the site of a sailing club that had moved a few years back… Perfect! 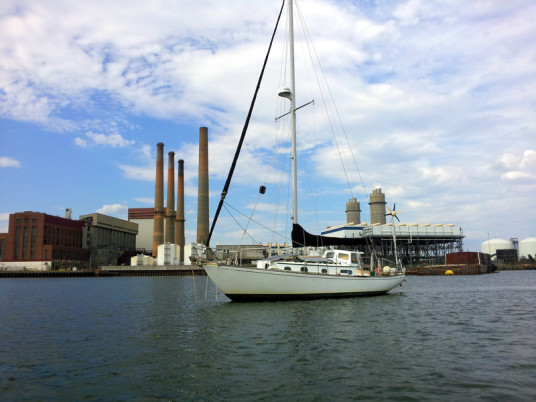 In less than an hour we were anchored and settled and that was three weeks ago!

We’ve been Hook Down in Chuck-Town using the free dock at the college as a base and a bike rack for all this time and no one, cops or legal types, have come by to ask us any questions.

It’s good to be home again!