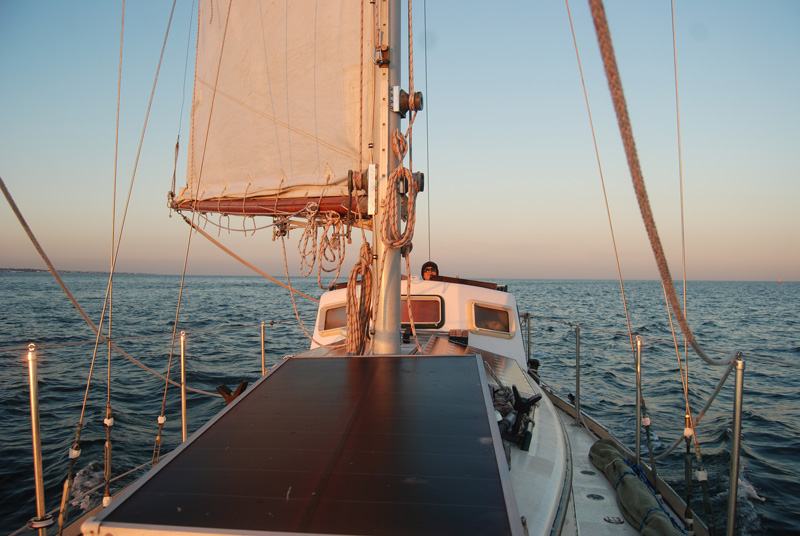 I kinda like these blog posts with titles that say we’ve traveled. Being so far north at the beginning of January wasn’t part of the plan, but the southwesterlies that trapped us in Manteo finally gave in and let us leave. 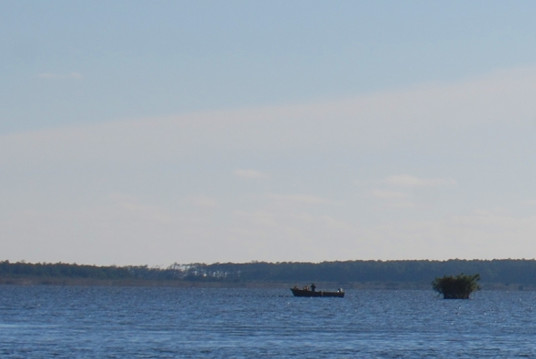 The long Roanoke Sound Channel (leaving Manteo for the Pamlico Sound) is thin and mostly straight while heading south. Dozens of duck blinds spotted the waters but only a few hunters were out. 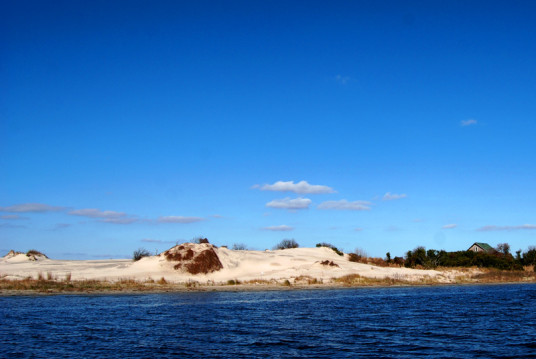 The channel goes between rock and sand islands, but mostly just between shoals that lurk under one or two feet of water, waiting to grind the keel of the unwary sailor.

(We aren’t that sailor.) 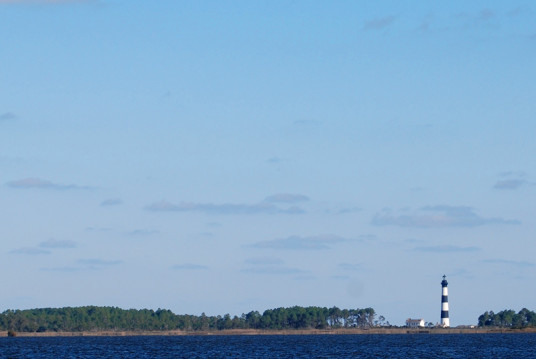 The Bodie Island Light came into view as we motored along, a light wind hinting at the possibility of sailing once free of the channel.

Then we came to the crossroads.

The rule of thumb in marking a channel goes “Red, Right, Returning”. This means that the red markers are on your right hand side, to starboard, when you’re heading into somewhere. They’ll be to port when you leave.

This simple rule gets complicated when channels meet up. The entire way down the Roanoke Sound Channel, we were leaving the sound and so the reds were on our left. There’s a place, however, where what seems to be the same channel becomes the Old House Channel, which is considered the return from offshore via Oregon Inlet. This means that the reds and greens…switch sides mid-trip.

With shoals on both sides.

As we were motoring along, approaching the change point, I (Dena) realized that the markers weren’t even shown on the charts. The bottom shoals so fast and the channel moves so often, that they don’t make any promises about where it is safe to go.

Okay. I pulled out the binoculars and started checking numbers.

See, the channel we’d been in had buoys and daymarkers numbered in the 30s. Once we hit Old House Channel, the numbers went back down to single digits and started rising again as we continued on. Therefore, a two-digit number meant red on the left, green on the right. A single digit number meant red on the right, green on the left.

And then we came to this son of a bitch. 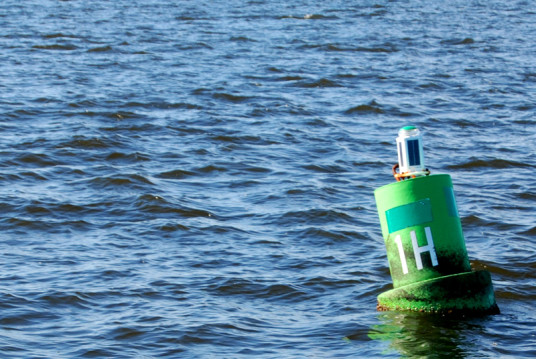 Through the binoculars, I saw a two-digit number…or thought I did. As we approached, leaving this green buoy to our right side, my confusion grew. It didn’t seem right, but it wasn’t until we were horribly close that I realized we’d entered the new buoyage. James dashed us across to the correct side of the buoy and we motored on, safe on our new course, if a bit shaken by the close call with a soft grounding.

After we got out of the nightmare channel we flew the Genoa full and were almost immediately surrounded by a good-sized pod of huge bottlenosed dolphin! These were not the tiny little animals we got used to seeing in Maine, these were large predators. I mean, easily as big around as either one of us and about 8 feet long! It was like breathing life back into my (James’) watch.

Alas, the wind didn’t quite pay off, so we rolled up the sail when we started to outrun our wind and stick-boated it all the way to the Long Shoal River and safely to the wide open anchorage, exposed from all sides. The weather was relatively calm throughout the night so it wasn’t too bad. The next morning, we rose early for the trip to Ocracoke. 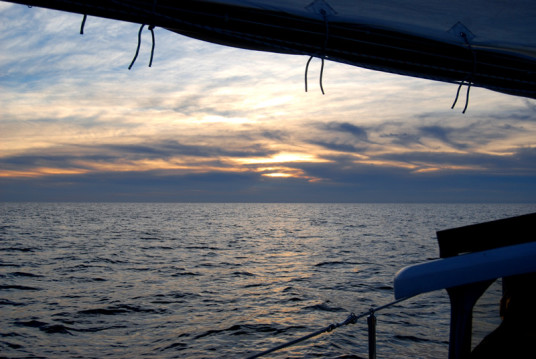 The forecast said partly cloudy, so this sunrise view was no surprise. The perfect wind was, though, and we motored just long enough to thoroughly warm the engine before setting all sail and flying through the water. 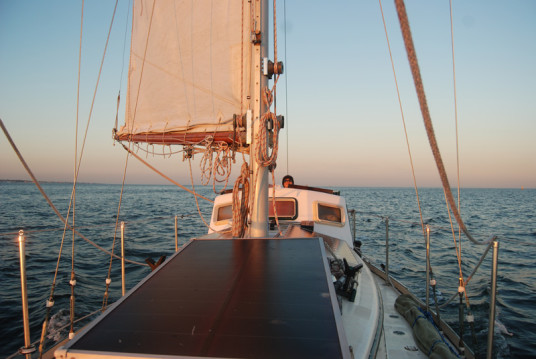 We were beating–not our favorite point of sail–with about 10 knots of wind and 1-2 foot wind waves in Pamlico Sound. As the day wore on, the wind built but also came around a tiny bit. When I (Dena) finally pulled a second reef, we didn’t even lose any speed…a sure sign that we’d been pushing harder than we needed to.

Freed from the hard heel, the boat jumped over waves and bore us to the Big Foot Slough Channel in no time. I wrote on my off-watches and struggled with the tendency to get mesmerized by the boat’s motion while on.

Once we furled sail and entered the channel, the wind was picking up behind us. We had no trouble getting into Silver Lake and we anchored as close to the north shore as possible, knowing that gales were coming. 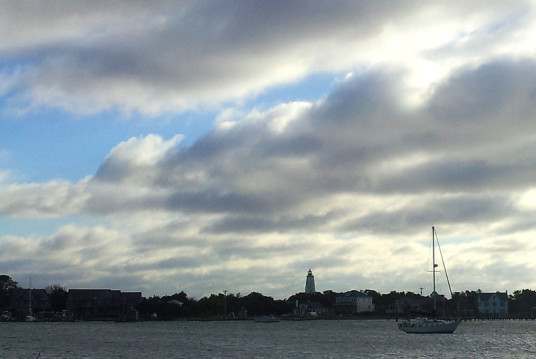 A trip ashore and some fried seafood helped us get sound sleep, but the next day, the wind started building. Another trip ashore (the ABC store was closed on Sunday) and we battened down for the storm. No rain, just wind in excess of 45 knots, but it beat at us, howling in the rigging and making the boat yaw on her bridle. Still, we trust our anchor even in a gale and we were the only boat in the anchorage. We slept soundly again, well-dressed and cuddling against the bitter cold.

Today, the wind died a little as the hours passed and we listened to NOAA weather radio. The forecast is good for leaving tomorrow, and we have a little over 40 miles to go across the Pamlico sound, down into the Neuse River and back to the ICW.