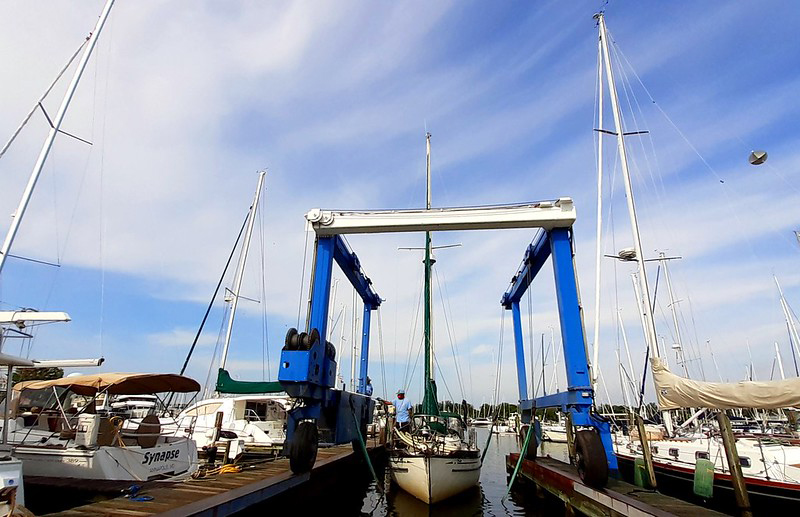 For the past few months (since before we got back in February) we’ve been piling projects up on our “when we get to Eastport and haul the boat” list. We had put together everything we’d need, but ended up storing it all for later…bottom paint, rollers…all of it!

You see, it was too cold in Warwick, Rhode Island, at the beginning of April to apply the chemistry we need on the bottom of the boat. It has to be at the very least 50 degrees F and it never got above 40 the entire time we were there. As a matter of fact, it didn’t get consistently above 50 for us until we got to the Chesapeake Bay!

It was a long cold spring for us. That was after spending the winter in Kerala’s steaming jungle so we weren’t quite up for the work of a haulout until it got warmer…much warmer.

We even took a side trip to one of our vacation homes…the bight past the shoal in Mill Creek.

It was our favorite easy destination when we both worked full time in Annapolis. Close by boat, far by land, and we never, ever saw any of the slipholders while we were dockmasters.

So by the time we sailed into Back Creek in Eastport (of Annapolis, Maryland), S/V S.N Cetacea was showing the signs of a well used traveling vessel.

That brown beard around the waterline of the boat is caused by tannic acid in the brackish waters of the eastern seaboard of North America. If you travel by boat within the protected waters of the US East Coast and you have a vessel made of gel-coated fiberglass, your vessel will get stained brown as shown in the photo above.

Because the acid doesn’t cause any long term damage most hardcore travelers like us wear the “Tannic Beard” with pride. It shows the people-in-the-know just how much of a cruiser you are. But there comes a time when you gotta grit your teeth and “git-‘er-done”.

So we started with the topsides. I (Dena) have been lecturing people on how to use On & Off for years and years, but I had never used it myself until now. It’s safe for gelcoat, but strips stains (and wax) like nobody’s business. The main ingredients are hydrochloric, phosphoric, and oxalic acids, and oddly enough it is neutralized by rinsing with fresh water. Easy enough, but I’m the geek who actually read the MSDS and that shit’s for real.

Most of the past haulouts we’ve done (15 in all) have started with the projects below the waterline, but the On & Off is too harsh to put off. As soon as that chemistry was done, though, we moved on to seacocks.

The most crucial aspect of any boat is that it floats, so any hole in said boat is a big damn deal. When replacing seacocks, we’re exposing a hole in the boat that is always there, but well stopped-up by some combination of valve, base, etc. When the new seacock goes in (we’re replacing old bronze ones with new Marelon that isn’t affected by electrical current in the water), it has to go in perfectly. The valve won’t keep the water out if the water can squeeze in around the mushroom (which is on the outside of the hull) and avoid the valve altogether.

It’s not even that complicated. A combination of devil glue (AKA 3M 5200) and screwing the mushroom tightly into the body of the seacock takes care it. If assessing the risk based on likelihood of failure in ratio with the severity of the consequences of failure, the intensity is purely on the consequences side.

We’ve been having engine trouble. (Fuck, I hate that sentence.) Several times, when restarting the engine after sailing for some hours, the engine has failed to put out water in the exhaust. The first time, we were sailing to Old Saybrook. When it happened twice more, we were tearing our hair out.

Eventually, it became clear that, somehow, air was getting into the system. It was either a split in a hose or the gasket on the raw water strainer. This problem was compounded by the fact that our intake didn’t have a scoop on the outside (just the mushroom you see above), and the rushing of water over the hull created suction that pulled air into the system from whatever was leaking. There’s a word for the effect this has on the raw water system: airlocked.

We’d hoped to simply replace the mushroom with a scoop strainer, regasket the inside strainer, and check the hose for leaks, but when has anything ever been that easy?

Instead, we removed and upgraded the whole seacock assembly, added a new-to-us bronze strainer, and replaced the hose from there to the water pump.

Getting to the whole set-up from inside the boat meant clearing one lazarette, removing a group 31 battery, and still I (Dena) was working with the ends of my fingers to get the seacock in place.

That tiny bright spot in the lower right of the frame above is the hole where the seacock goes.

One of the cool things about reading a blog is that you, the reader, don’t have to do the things we did. You get to watch.

That shit was hard and it took a long time (during which we also did the bottom project) but we nailed it. I (James) went up and down that ladder 41,000 times, Dena went in and out of that lazarette 10 million times, and we did the job right the first time.

Not only does the new system work perfectly but the entire cooling system is now easier to work on if needs be. That Vetus hose is a miracle of flexibility.

The bottom job was ordinary: griddle brick with water, wipe down with Interlux 216…

…and apply paint until two gallons are transferred from the cans to the boat.

An unexpectedly seized seacock in the head meant a last minute project addition, which put us one day past our planned launch but also gave the paint a nice long time to dry. Since the bottom paint we’re using is water-based, it’s the opposite of the kind where you have a max time to launch…our minimum time was 16 hours.

Because we rock, the last night of haulout-2020 was a wonderful relaxing evening in the cockpit overlooking the mouth of the Severn River to the tune of a beautiful Chesapeake sunset.

As we looked out across that calming scene, we reflected upon all of our previous haulouts.

So yeah, sailing the seas of Eastport was a difficult and uncomfortable adventure for sure but this process is part of the life we’ve chosen to live. It’s a chore, albeit a lofty one, and as long as we take it together, one explosive tragedy at a time…it’s all good!