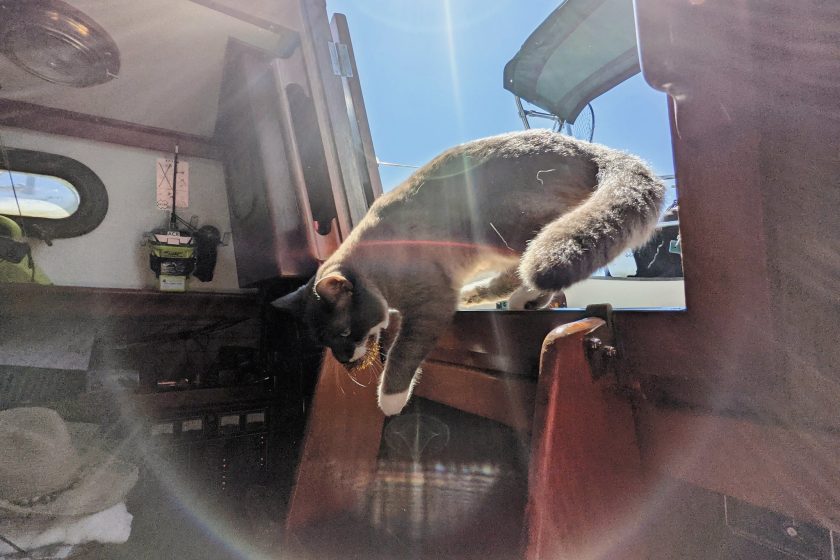 I used to pretend to love listening to those “Salty ‘Ol Captains Courageous” at West Marine drone on and on about the strange and impossible mishaps that occur on boats.

They’d say things like  “the darndest thing happened” or “you’re not going to believe this…” When it could almost always be attributed to either neglect or some kind of miserly chinzyness. More often than not, it was the latter.

That (above totally bad kitty) cat managed to work a cardboard box, that we were saving to recycle, into a position to leverage the primary bilge pump switch to “off”.

Now, we have a drippy packing gland, or rather “an active bilge” that is a total pain in the BODY to get to so, yeah, we like our bilge pump to work.

During the height of the storm, formally known as T.S. Henri, we discovered that the bilge was completely full of sea water, the #1 Battery bank was sunk and all the electrical connections to it were dissolved into the muck of our beautiful sailing vessel.

Battery 2 was at 30% but functional, so we shut everything else off and ran the (working absolutely perfectly) bilge pump for well over a hour.

After that, we drank rum.

The next day the storm was stalled over New England and we dinghy’d in. Which was still a really big deal.

We only went ashore to buy the main connection terminals to the big 8D, #1 battery bank. In fact, the only things we didn’t have as a redundancy on board were those two terminal connectors.

We got the parts (we bought 2 sets), got back to the boat, re-wired the bilge and then the sun came out.

As we were cleaning up later that day Dena actually witnessed Beluga Greyfinger, that totally bad kitty, playing the very game that damn-near sunk us the day before.

Of course he wouldn’t do it for me, he’s not really a performer like that, but I got it. Not only did he almost sink us with a cardboard box in a storm, that little shit stepped up, right to Dena’s face.