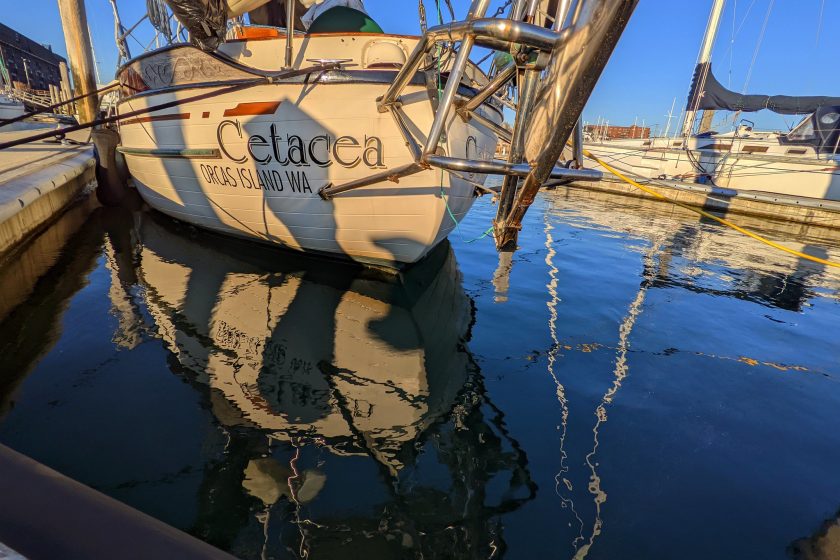 I (James) have a winter problem.

My problem with winter in New England isn’t that it’s cold. I don’t really mind the cold that much. My problem is nothing, meaning no one, works and you can’t go anywhere without a great deal of effort.

I mean, we travel through the universe on bikes and boats so if we’re frozen in with both we get kind of itchy. Every ride is slow and careful, especially with some thawing of the snow mounds and refreezing at night. It’s a dance of glare – the wet glare of the melt water vs the glassy ice.

…and ultimately that leads to powerful inspiration. Not only visually but geographically!

And what does being geographically inspired mean to us? Well, it means Pointing The Boat and that means travel, serious travel.

I (Dena) have been holding down the straight job for just over 11 months. It’s a big question mark on whether they value my work enough to keep me, meaning offer me the money that would make spending on the boat improvements more attractive than traveling on the boat itself in the state we’ll get it to before summer.

During this last snow storm we pulled out the Cornell books and went to work on a Northern Atlantic route that would be a profound ocean passage while working with the prevailing weather systems.

We discovered that we are in a very nice position to do a haul-out then sail from here, Lynn, MA to Block Island at the beginning of June. That shakes us down for the tight reach across the Atlantic Ocean to the Azores Island chain. We’re expecting that crossing to take 15 days to a month. I have less information about my mom’s Azevedo side than her Miller side, but I’m intrigued by the opportunity to find out what being an Azevedo’s daughter means to that part of the world.

After exploring the Islands of Dena’s ancestry, we’ll catch the trades NNE to Ireland. That’s a ten or eleven day broad reach that should get us to or close enough to Cork to visit for a spell. We hear there’s some really good anchorages in the Lough Mahon. We’d also like to explore Dublin and Belfast before heading back into the North Atlantic to the southern Hebridean Island of Barra. Depending on whether we beat feet or explore, it could take anywhere from two weeks to a month.

Barra is the former home of my great-great-grandmother on my mother’s side, Rose MacNeil. To return to my family’s home with the perspective of an ocean navigator is something I’ve always wanted to do and this is the opportunity to do that. On the way to the Faroes Islands anyway? Time to hit Barra for the first time since I was a rock star.

From the Hebrides to Torshavn, the capitol of the Faroe Islands, should be a nice long exploration in jibing downwind. From Torshavn, Reykjavik shouldn’t take more than two weeks, which puts us there at the end of August if we continue to be our slow-ass selves. It’s the perfect time to skim the coasts of Greenland and Newfoundland on our way back to a more southerly winter this time next time around the sun.