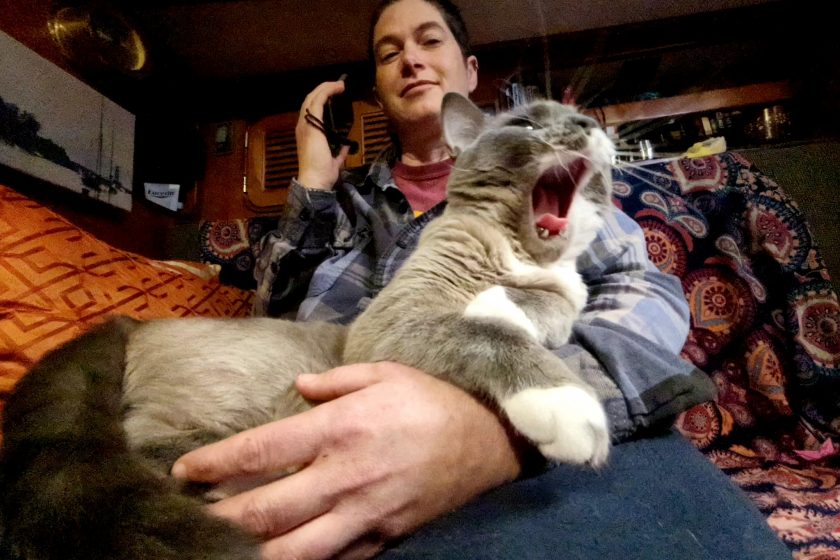 It’s fun to talk about adventure and it’s always stimulating to hypothesize on the possibilities of profound life changing experiences at sea. Then you start fantasizing, then planning and at some point in a planned adventure the reality of it descends on you with all the weight of its potential for calamity. That split second when you can clearly see all the different ways you can kill yourself just by living life the way you do.

Well, the way we do.

We’ve been looking at charts of the Azores, Ireland, Scotland and the Netherlands for years. Over this past (fucking brutal!) winter we started lightly making plans and whispering about sailing across the Atlantic Ocean in the spring before hurricane season. But suddenly, like we do, the decision was made over a tasty meal to sail transatlantic at our first opportunity. The foot/feet went down! That was in the dreary depths of a particularly bad New England winter so it was still a bit on the fantastical side of the imagination.

Until one day Dean called to let us know that he was tired of waiting and totally behind us going transatlantic. Not soon, this year, now. To prove it he hit us was with a nice big grant. Enough funds to really make it happen right. Well, we were both immediately blown away thankful and inspired to move on to the next major leap that could make all of this happening actually happen. Dena’s wage-slave gig had to go. She dropped a three-weeks notice on them-‘cuz she’s cool like that- and that was big-time profound.

But that moment, that Holy motherfucking Shit moment didn’t happen to me (James) until…

…My friend Michael brought our Alternative Energies Tower (AET) down from Maine and it actually fit!

Okay so, just to catch you up on this deal…

Last September I traded our badly-fitted full-cockpit-cover for an aluminum tower I found at the Mass-Marine boat salvage yard. The tower was originally built for a totally disgusting powerboat so Dena and I did some measurements and sent it up to the wilds of Maine to be manipulated by a local artist that my friend Michael knew of. Michael didn’t actually know the guy but he got it from a reliable source that this dude was the shit…and believe it or not, he definitely was the shit!

The Holy Shit moment is good for many things. It’s that moment when you start making lists of survival priorities because you have to. It’s also that moment where everything you do from then on is moving towards surviving the adventure in style.

The AET will support 400 watts of solar panels and a Rutland 1200 wind-generator which should be plenty for our needs and I can’t stress the word needs enough.

We very successfully lived completely off the grid last summer with only 200 watts of solar so the addition of another 900 (potential) watts is not only nice to think about it will give us enough power to run the decadent gear. The stuff that makes the adventure really nice. Things like the water-maker which we plan to run once a day around noon but the chart-plotter and the fridge we can run almost non-stop throughout the off-shore passages without the worry of running out of power over night. I mean, as long as we have wind.

The wind-generator has a potential of an extra 500 watts of charging input in relatively moderate conditions and starts charging with as little as three knots of wind. That fucking rocks! This wind generator also comes with a MPPT charge controller- also rocking- so we’ll be able to go straight to one of the house batteries with two of the four solar panels and the wind generator with the other two panels going to the other house battery bank. In other words: I honestly believe that power will not be an issue on this voyage because we just don’t use that much.

There’s another kind of Holly Shit moment. The dreadful kind!

We love living at anchor.

When you are at anchor you are truly living aboard your boat. You flow freely with the forces of the world and it feels completely natural. It’s the only way for me to properly understand the motion of the Earth and I love that understanding from that perspective.

With the wind and the solar power secured above the stern the wind will flow freely to the windvane self steering system that will hopefully drive us most of the way across the Atlantic Ocean. Just like it did in the Pacific Ocean only sixteen years ago this November..

Holy shit this is really going to happen!