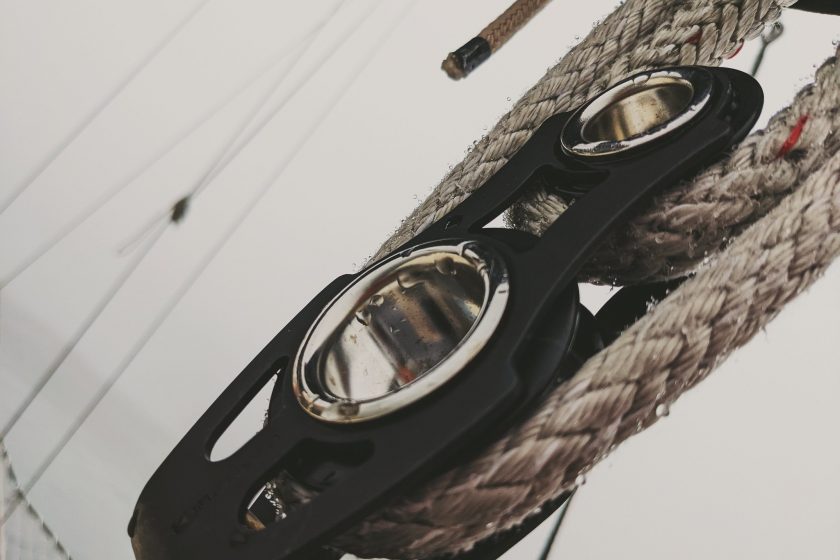 We stayed in Somes Harbor for a good long time. Time enough to get choked out by three generators before finally getting the anchorage almost to ourselves…Cat-a-morons from Charleston with families of four never go anywhere once they’ve discovered a nice little cove to foul. I don’t understand why nobody ever told the designers of the Lagoon that the Cylons were the bad guys! I didn’t take a single picture of my favorite view of Somes Harbor because that stupid Shat-a-moron dominated the view the entire time we were there.

But on day four we bolted.

We weighed the gunky hook and took the fair current down the Sound back to Southwest Harbor for one last provisioning run and were underway by 0825 the next morning.

It was dead so we motor-sailed through dolphin infested waters before the last of the summertime Sunday power boaters took to the water. It was a loud but refreshing hop from the anchorage in Southwest to Sand Cove just outside of Corea, Maine. At that point we were further downeast than the two of us have ever been under sail. It felt good.

It was great having a nice big anchorage to ourselves and all, especially after that last Somes Harbor experience, but this place was surrounded by McMansions on all sides and thick with lobster pots. Best move on.

We were out of Sand Cove again by 0830 and under full sail in the North Atlantic Ocean less than twenty minutes later. It was an almost perfect sailing experience. We were going east-northeast and the wind and waves were coming from the south-southwest, making for an all day broad reach on a gentle ocean roller.

By 1400 we were within sight of Grand Manon Island at the mouth of Canada’s Bay of Fundy so we hooked around Moose Peak Light and nestled up in the lee of Water Island just off the coast of Mistake Island in the middle of fucking nowhere.

This, I’m telling you, this is downeast!

Now we’re sitting out a fog day with a thunderstorm day promised for tomorrow. Eating and writing and projects will keep us busy.