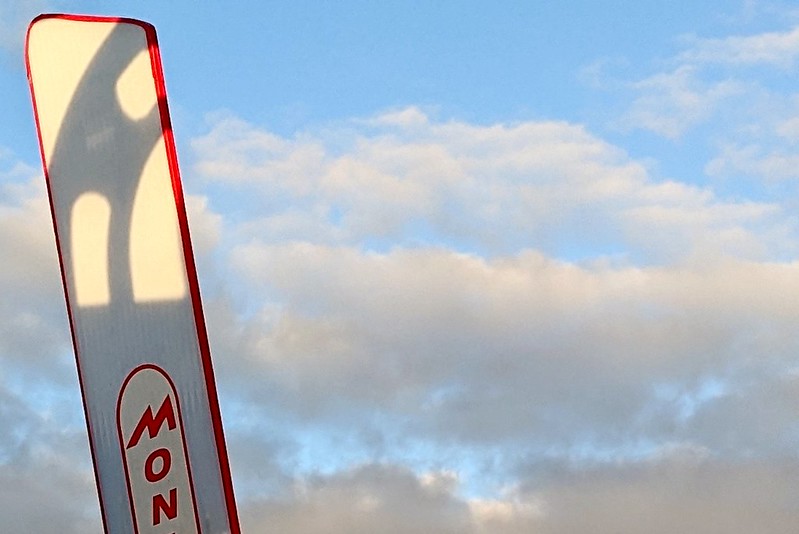 We went to Port Washington on glass water in a thick forbidding fog that engulfed our little world all the way to Manhasset Bay. That’s where the gloom released it’s grip to let us anchor and sleep. It was a terrifying necessitous experience. Only one beautiful moment remains in my (Dena’s) memory. The fog was so thick that visibility at water level was less than a quarter of a mile, but it thinned overhead enough for a beam of sunlight to penetrate and gleam on the water. The softly waving water surface became riddled with catspaws for a moment and I saw silvery lace curtains, blown in a gentle breeze.

Port Washington is familiar to us. Groceries, laundromat, and good eats within an easy walk of the town dinghy dock, it’s been kind of a favorite for the past few years. But the town’s harbor plan has been hijacked by the corporate non-entity marina machine, and that has had a rather dramatic effect on the overall feel of the place.

They (the town of Port Washington) used to have a bunch of moorings sponsored entirely by the city, free for 72 hours. As a cruising sailor, you could roll up on one of those moorings on a Friday and live the good life for an entire long weekend for free! Now I (James) don’t really know if it was a direct cause and effect relationship, but shortly after the nightmare-multinational-marina-conglomerate takes over two of the local marinas…all the sudden the town doesn’t think they should be leaving that good rich-boater money on the table anymore. This year they started charging after the first “solar” day. Well, fuck a bunch of that – we anchor our boat.

Of course, that means that when we decided to take the late-night fair current through the city, we were hauling chain in the dark. It was a good decision…we had enough wind to sail most of the trip but not so much as if we had left during the big blow-up on Thursday. A couple anchored nearby, on a boat we’ve seen on and off all summer, chose the 12-hours-later fair current and lost the wind very early along the Jersey Shore.

Thick sticky mud is what I (Dena) remembered from previous stays in Manhasset Bay, but I couldn’t see a thing and just cranked that windlass handle until the anchor was at the waterline. Still air made it easy, but I just knew that there was a muddy mess being deposited in our chain locker…which is located at the foot of our sleeping space. Oh well!

James drove from midnight to 1am and then I took over. The East River at night is rather disconcerting, to say the least. So many lights, all of them moving according to the perception of the viewer who is underway. Paralax provides information about which are closer and which are farther and then all of a sudden there’s a light that isn’t moving across the background at the rate of the rest of things and it turns out that it’s a tug with a 300′ barge using the same waterway and in much more need of space and capable of much fewer dramatic dodges.

Alert? Yeah, I was alert.

Another sailboat was taking the same fair current. They had an AIS transceiver, meaning that they send their information and also receive. That signal told us that the boat was named Osprey, that it was 36′ long, and that they were traveling at roughly the same speed we were. Our AIS is receive-only, meaning that we are visible to other boats only by eye and radar, not with that identifying signal that the other boat had.

Wow, New York City on a Friday night/Saturday morning between 2 and 3 am! If you’ve ever experienced the proverbial “City That Never Sleeps” with Harlem to starboard and Brooklyn to port, you really haven’t experienced that city! But I (James) have now thoroughly experienced that town, let me tell you!

Coming into Hell Gate at 9.6 knots following the stern light of the boat ahead of me…to make sure I don’t hit them… I am inundated with the awesome light of the biggest fucking city in the U.S. of fuck’n-A!

Manhattan screams but Brooklyn growls so I got in the Bike Lane on the East Manhattan side and rode the East River’s torrent for an incredibly interesting hour from Harlem to the Battery, switching my view from the NEW YORK AWESOMENESS to the chartplotter by the second. I somehow, no really somehow, managed to not kill my family that night.

(Dena and Beluga say good job and thanks.)

There were five Disco-Boats. The first one I didn’t see until that fucking piece of shit was right on top of me. It looked like a painted up WWII crew transport with a vera-light rig and a mirror-ball. The second, third, and fourth were almost identical to the first but somehow louder. The fifth one, I could swear I heard an interlocutor call out B-23 and a faint… Bingo!

Photos, AYFKM?! Remember the saving my family part? Well, it was their turn.

I (Dena) took over. I hadn’t been drawn to the nighttime city the way I thought I might. It could be because of what makes NYC special to me to begin with…the Art Deco architecture. I’m not really about the bright lights, so it was less compelling at night.

I aimed us between Governor’s Island and Brooklyn. The other sailboat appeared to be taking the ship channel route, which I find ludicrous because, well, it’s where all the big ships are! I prefer to head through the Upper Bay ship anchorage, where the brightly lighted ships are all anchored instead of making way and unpredictable.

That got me to the Verrazano Narrows bridge just ahead of the slightly-fast sailboat that had gone around the anchorage and they, once again, kept to the ship channel where I went through the Gravesend ship anchorage. The sheer number of ships, anchored and underway, was unprecedented in my experience and I was so very glad to have the AIS information to confirm which were which.

With the single reefed mainsail aloft. Oh yeah baby, here we go! Between the 1,000 foot container ship and the 685 foot fuel tanker was a gap of about two-thirds of a mile…um, “in these shoes” no fucking way! After the thousand-footer there was a 25 minute gap between that and a procession of massive Carnival Cruise ships. I (James) crossed the bow of a ship with a fucking roller coaster and a crane-ride with a little over a mile to spare between the red and green ship-channel markers. We were now in the Atlantic Ocean! Hello Jersey Shore.

So many shift kisses! We usually do three-hour watches overnight, but we correctly guessed that we’d need to trade off more often than that through the city. We’d gone to bed at about 7pm and, amazingly, got some good sleep between then and the 11pm alarm. It was getting to be a long night, though, by the time the sun came up behind the clouds.

As we’d come out of New York Harbor, the wind had picked up enough for us to sail. As we corrected our course for staying near the Jersey Shore, it became a good angle for adding the yankee. We proceeded to sail, watch on watch, down and down and down.

I (James) was in the Atlantic Ocean, sailing. The cat was relaxing in the cockpit to leeward and I was a-windward. The boat was performing to perfection. LoveBot was barely working and the sun shone in all its oblivious glory. The world was absolutely alive all around me. I fiddled with the course a bit, then a little more until the rig started to rattle and complain so I opted to gybe. I set the down-wind angle on LoveBot 45 degrees to lee and she slowly went aft through the eye of the wind. I decided to coax the mainsail around by giving the sheet a tug to starboard when a gust pulled it back to port. I was in that monkey-hold position and it yanked me hard up against the port side companionway slider. Pop! went the rib right under my heart.

I have popped the cartilage in my rib-cage so many times that I know it the second it happens. First a sickening pop occurs that I can hear throughout my entire body. Then a weakness takes over and I go limp. Then I rasp in a breath and the pain descends. At first it doesn’t hurt all that bad so I assume the injury isn’t as bad as the last time it happened. But it is, and I discover that the next time I exert any physical stresses on the injured rib. Six weeks later, I’m no longer in any pain. That is if I don’t injure myself again in the meantime. I hate this kind of pain. But here we go again.

Dena came awake pretty quickly, handed me a handful of ibuprofen and ordered me to lie on my back and get as comfortable as I could as fast as I could. She was right – the swelling wasn’t too bad after a half hour of down-time I felt much better.

I (Dena) knew that James was Not Okay, but not exactly how far from okay he was. Once he took his next watch, I used every tool at my disposal to create a series of ditch points, places where we could opt to stop corkscrewing in the waves off the port quarter and let his damaged body rest…at rest. Barnegat Bay was the first option, one which a Mystic Whaler dude had told us a lot about. Atlantic City…nah, we would not be going there.

The last of the stopping options was Cape May, whether by actually stopping in the town and anchoring off the Coast Guard station again or by getting out of the oceanic swell and heading up the Delaware Bay. A stop in Cape May meant a few days of waiting for the next opening while going up the Delaware meant a few weeks’ delay. The upside was short, easy days while James’s body dealt with its damage.

With LoveBot driving, we were able to trim with the yankee as needed, bringing it in and out as the wind veered and backed just enough to blanket it behind the main, so my watches for the rest of the day were almost effortless. Cetacea was in her element and taking good care of us. We didn’t need to go into Barnegat Bay.

The sky started looking really good in advance of the sunset. We were off Mantoloking, NJ, when I (Dena), enjoyed the show just before James took his first long watch from 1800-2100.

I (James) faced the night with a hand full of pills and a half pot of coffee with a kind grim determination that survival stories are all about. I was going to survive this with the mast up, the keel down, the crew in the boat and the water out. And that was it that was all I could imagine I was going to do.

Atlantic City consumes a lot of oxygen for a boater doing the shore route. We were subjected to it for hours and it did a fine job of ruining the bits of sky that weren’t already clouded over.

On the other hand, the wind waves and swell weren’t at quite such cross purposes, and we were making good time. We were past by midnight and the end of our first day.