(Not what you were expecting, eh?)

Monday, December 8, 2008
**Eid-al-Adha (Feast of the Sacrifice) (Islam)
Including the Hajj, this three-day festival celebrates Abraham’s test of obedience to Allah (God) when he was asked to sacrifice his son Ismael.  At the last minute, Allah replaced Ismael with a lamb.

This festival is called different things in the various tongues spoken by Muslims.  Here in my part of India, it’s influenced by the Tamil version, which is named after the Urdu word for goat – baqri.

Anyway, so this festival requires that Muslims make a great deal of food and share it, 1/3 with the poor, 1/3 with friends and family, and 1/3 for the household.  We got another lovely batch of food – parota, something like stretchy tissue but tasty, and a chicken curry in which we dipped the other things.

Then I got on the computer and researched the holiday.  Seems right to know why I’m getting fed, eh?

Okay, so this festival is about sacrifice.   And part of the whole deal is that Muslims who can afford it are supposed to sacrifice their best domestic animals.  Sheep, camels, cows, goats.  Whatever you’ve got on hand, as long as it meets strict age and quality standards.  Only the best.

Right after my birthday, the 2nd or 3rd of December, our neighborhood got even louder than usual.  We’d grown accustomed to the birds – they’re loud and some of them sound insane, but what can you do about birds?

Roosters and chickens, no problem.

Then, right after my birthday, I started to hear a kitten crying.  I drove myself crazy trying to figure out where the sound was coming from and finally saw the little critter in the house next door.  The mama cat must have been out hunting.

Then, maybe a day later, we heard a goat.  The goat was not happy.  Sure enough, next time we went out-and-about, we saw a goat tied to a tree, mowing the empty field on our lane.  Effectively, I might add.

And a day after that, when light’s out came around, the cacophany swelled even further.  A cow, mooing.  Someone had brought a real cow into our neighborhood.  That’s a very North-Indian kind of thing, there not being nearly as many random roaming cows down here in the South.

So the symphony was complete.  We had humans (either neighborhood children or muezzins doing the call to prayer over loudspeakers from the three mosques nearby), birds of twenty varieties, kittens, a goat, and a young cow.

The peace of light’s out was banished.

After we got the gift of food from the neighbor and I looked up the holiday, a slow dawning thought bummed me out.  Oh, no.  Were these animals going to be killed as sacrifices?  Ugh.  James scratched the goat between the horns.  I talked to the cow while waiting for him.  We were tentatively buddies.  Why oh why did the vegetarians end up in the Muslim neighborhood?

Different websites said different things, so I wasn’t sure how long our new friends had to live.  One said it was a three day festival.  Okay, so we’d get more peace (though not, perhaps, of mind) in a couple of days.

One day, the goat was gone.  We made sorry icky faces, shook our heads, and wondered at the continued presence of the cow, now doing a mediocre job of mowing the empty field.  Several days after that, the cow mooed.  We were having chai, just after getting up, and it occurred to me. 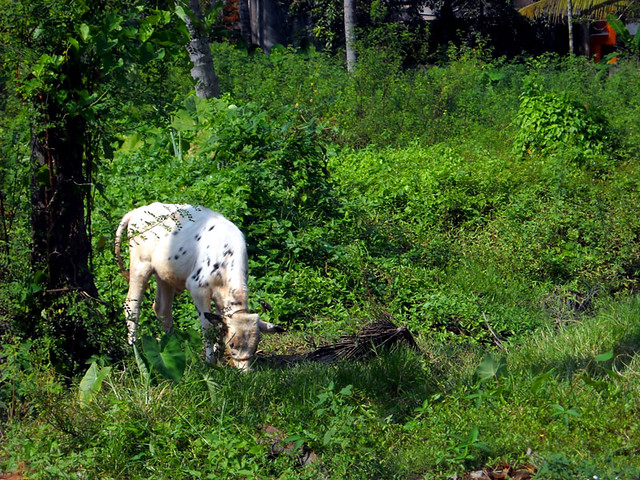 The cow was still alive.

Tentative happiness filled me.  Maybe they bought it for milk!  No, next time we walked to lunch, we confirmed that one doesn’t buy a bull for milk. Day after day, sooner or later, a moo would reach our flat and one of us would comment, “The cow’s still alive.”

I don’t know if the poor cow was rejected for sacrifice – too young, too skinny?  I just know that it’s one less thing I need to think about.  And the cow is less annoying than the goat, so if one of them had to go…

Now, my only concern is that I haven’t heard the kitten in a while…