One of the best things about a boat our size is this: everything we do is a dramatic improvement.  We’ve worked pretty hard on this lovely creature, and she keeps paying us back by looking and functioning and feeling better and better and better.

If I’m glowing a bit, it’s because we just did a single day’s work that brought together months of effort.  Long time back, we tore out every speck of cabinetry, paneling, etc, down to bare hull.  We’ve been building that side back up slowly.  First, we built the battery box.  Second, we build the settee.

Third was to be the settee cabinet, but a winter intervened and I’m very glad it did.  We discovered that our old solid-construction fiberglass hull sweated like mad.  For the non-mariners in the group, that means that cold weather outside, contrasted with warm air inside, causes condensation to form on the inside of the hull.  It forms; it runs down; it makes everything that touches the hull sopping wet.

We quickly developed a plan to create a little open-air insulation.  Modern boats have a core sandwiched into the fiberglass hull that insulates; older boats need actual foam or at least some space for air to circulate and cool.  We decided that we’d make her look her age…ahem…I mean, traditional…by applying horizontal battens a half-inch from the hull, with a half-inch between, in order to encourage a dry hull.  The salty term for this is ceiling planking, where the ceiling on a boat is the “wall” created by the hull.  It reduces the sweating and, when condensation does happen, these battens will keep all our various fabrics away from the water.

We purchased 200′ of Spanish Cedar from Chesapeake Light Craft in Annapolis, MD.   John Harris was tremendously helpful, by reading and confirming/correcting my ideas.  They were a pleasure to deal with, and they got my 1/4″ x 2″ Spanish cedar very quickly.  Their selection of woods is excellent and they have a relationship with a mill that allows them to assist people like me without blinking and at a very reasonable cost.

I chose the Spanish cedar because of the description on their website:

“Spanish Cedar” (Genus cedrela) is actually neither Spanish nor a member of the cedar family.  It’s a member of the mahogany family, and we use it in all applications where we might have used the now-scarce Philippine or Honduras mahogany.  Even to a highly trained eye, the colorful reddish grain is indistinguishable from mahogany.  The fragrance, however, is absolutely distinct:  it smells like aromatic cedar, the kind they make cigar boxes and blanket chests out of.

When I picked it up, I was thrilled.  It’s gorgeous, with variety in the grain.  There are long straight-grained segments and some truly beautiful, almost curly-maple-looking parts.  The smell is unmistakable – yummy cedar.  The smell made us decide to leave the parts inside the settee cabinet unfinished – we can even scuff it with sandpaper once in a while to release new surface.  We plan to Epifane the parts that will show, but only on the front, top, and bottoms.  That way we get the scent out of the backsides even there!

It’s thin and soft enough to cut easily with a hacksaw, which is good.  Trying to cut it with a jigsaw made it bounced up and down with the blade – one of those moment when a real shop with a workbench and…okay, back to the real world. 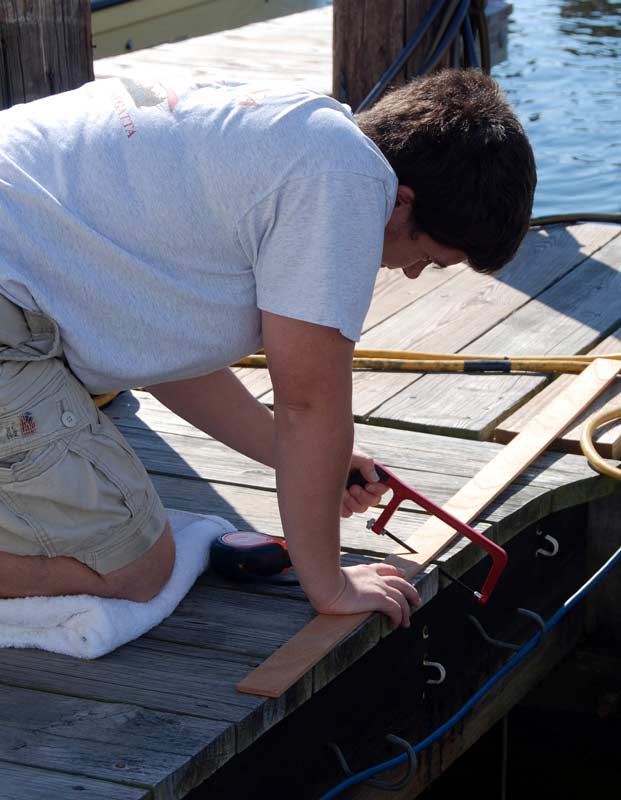 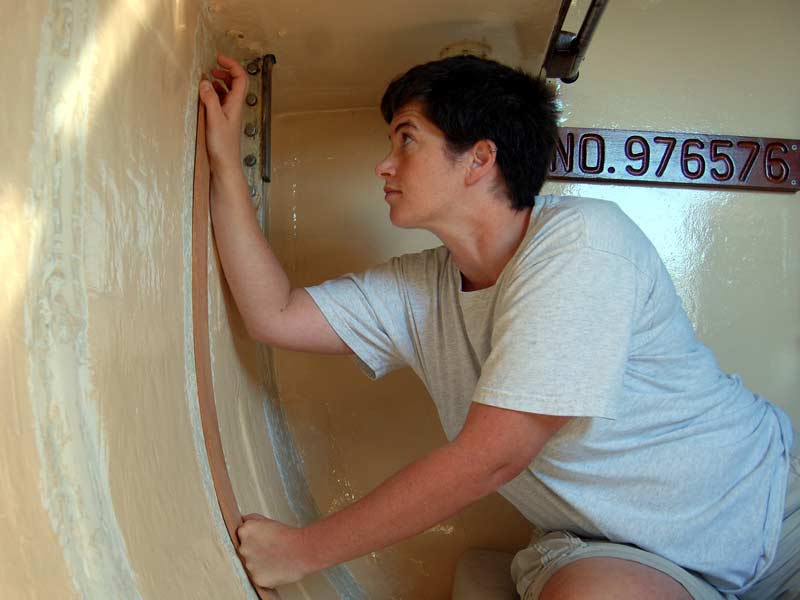 We needed 1/2″ thickness so we could give the screws good purchase and create a reasonable amount of air space.  This meant using two of the 1/4″ thick strips and laminating them together on the hull.  I cut the battens to length (and measuring along curves is always exciting) and then used West System’s G-5, a 5 minute epoxy, to glue them to the hull.  Before I got clever, I was gluing one, waiting 20 minutes (because really, who is going to trust them when they say 5 minutes?), then gluing the second on top.  Later in the process, I put the 5 minute epoxy on both pieces and put them up together.

It takes a thin, flexible strip of wood to conform to the complex curves of our hull.  I thought that every single one would be a struggle, but the forward ones were pretty simple.  Just brushed the glue on the wood and the hull, then warped them into place and braced them with telescoping boat hooks.  We bought an extra boat hook so that we’d have enough for the more difficult cleats. 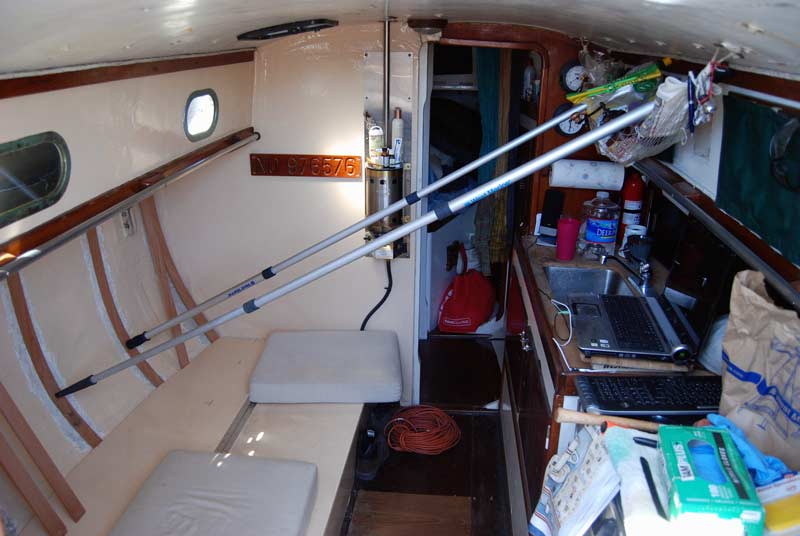 When applying the second cleat, I wanted to see a little glue squeeze out if possible, but I had to smooth some excesses. 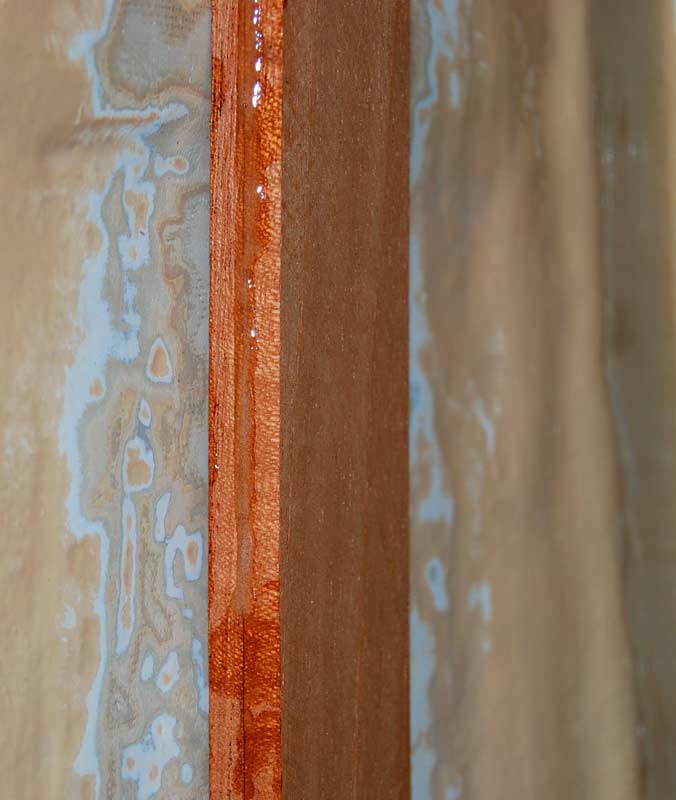 This laminates the two together, but it’s still not strong enough for me. Each cleat, now 1/2″ thick with two pieces of wood used, got a 6″ strip of fiberglass run down its length.

Our toerail is bolted through the deck, and the nuts are right along the inside of the hull.  I had to be careful to leave enough room above certain cleats so that we could still get to those nuts.  You never know when you’ll have to remove/repair/replace any part of a boat, so making something inaccessible is always a bad idea.  Besides, we plan to do a big deck-cleaning next spring, wherein we will strip all extraneous fittings, fill all the holes from old water fills and such, and recover and repaint the whole deck.  For this, though we cringe at the idea, it may be a good idea to remove the toerails from both sides while working.  So yeah.  No blocking toerail nuts was the rule.

Not so hard to measure for.  What I didn’t foresee was the cleats sliding up the hull due to the angles of the boat hooks.  I was seriously aflutter, trying to hold it down against a strong upward pressure while casting about for some way of bracing it in place.

It’s not elegant, but when needs must… 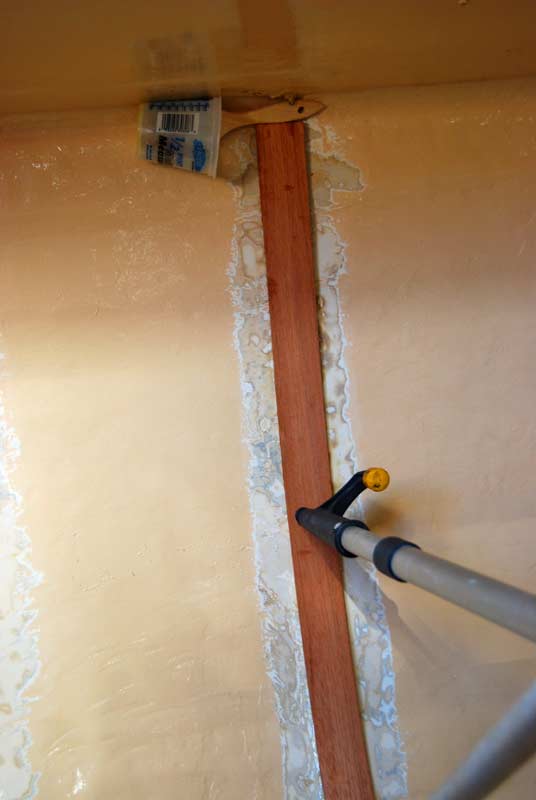 So yeah.  And don’t worry – the epoxy in the cup had already hardened – that’s why I couldn’t use just the glue brush by itself!

While all of this was going on (this was one day’s work), James was earning a living on the very same dock.  He visited periodically, helped brace cleats so I could get boat hooks in place, placed boat hooks while I braced cleats, etc.  The last two were the hardest, but we got them in place, working together. 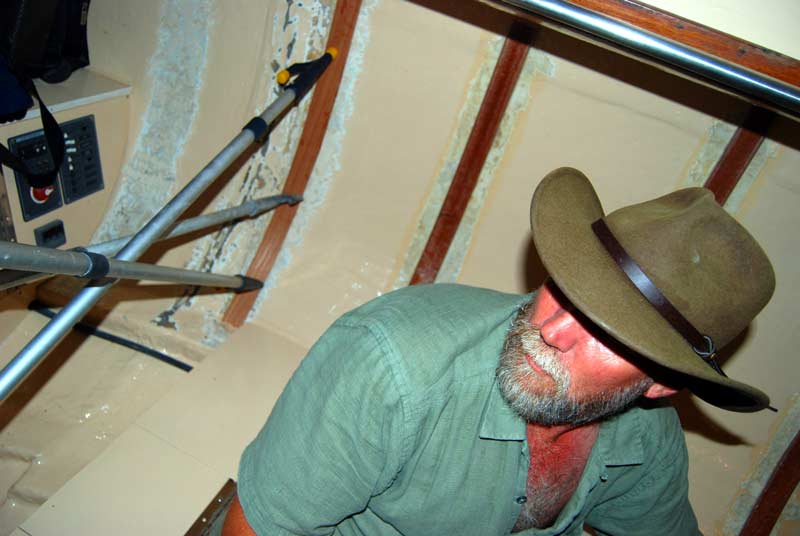 Okay, enough sappiness for the moment.  (Though there could be a resurgence at any time…brace yourself.)

The next photo shows my work setup.  I had purchased about 20 glue brushes and a huge stack of little plastic cups.  Each time I mixed up some of the 5 minute epoxy, I had to use a fresh stirrer, cup, and brush.  The stirrers and cups got reused eventually – once the epoxy is cured, it’s easy to break out/off.  The glue brushes were trash.  I also had to do a small amount of chiseling to make things fit correctly.  I made a tremendous mess, but in a space this small it still only took a half hour to clean up. 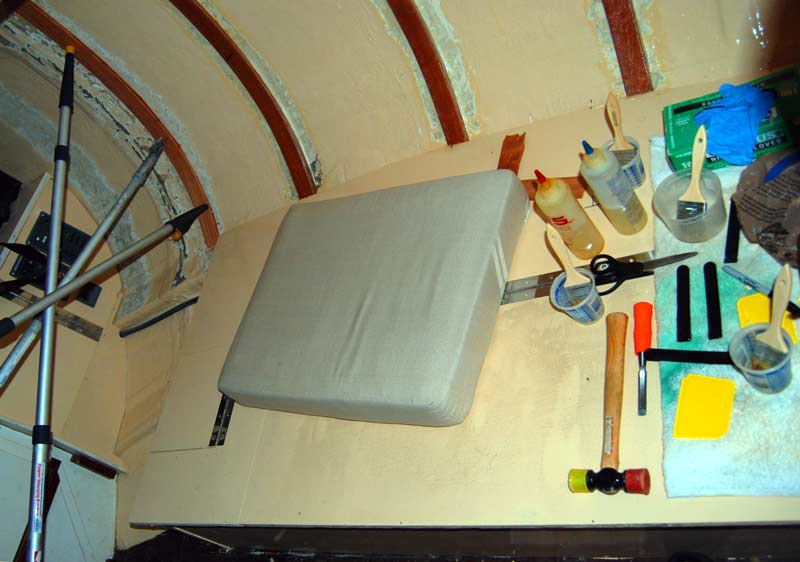 I was infuriated to realize that the last two cleat I’d applied refused to adhere to the hull.  The curves were too intense, and I tried twice, ruining good wood in the process.  I had a full-on destructive moment where I ripped a section off with my bare hands.  When I calmed down, I chiseled what was left into a shape I might be able to add on to. 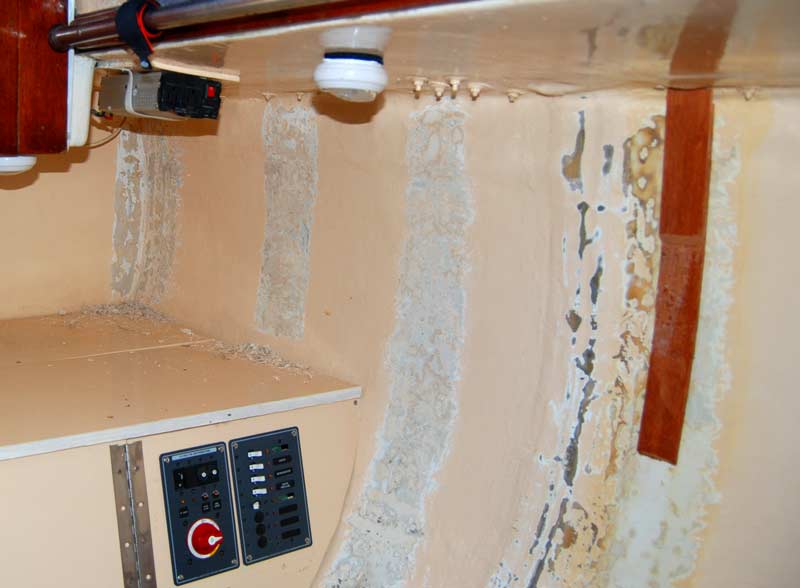 I was stumped.  Luckily, I called my dad (for an unrelated reason) and chose to complain at him.  He was interested in the project but not impressed with my problem.  He has many years and airplanes of experience fitting thin strips of wood to complex curves.  With no more than the expected amount of teasing, he reminded me that one can cut along the back of the curve in order to make the wood more flexible without losing overall thickness.  Since we intended to fiberglass over these cleats, this was a perfect answer to problem that had driven me to violence.  I was so happy that I made James take me out for a nice dinner…oh wait, that was the night we tried Annapolis’ version of Mexican food.  Is Annapolis really farther from Mexico than Seattle?  It is – at least culinarily.

I was convinced that his idea was going to fix my problems, so I removed the pieces that had remained when I restarted the project.  After the struggles at the end of the previous attempts, this day’s work went quite, quite well.  I glued in the cleats over the electrical box (where we intend to build a tool box at the back)… 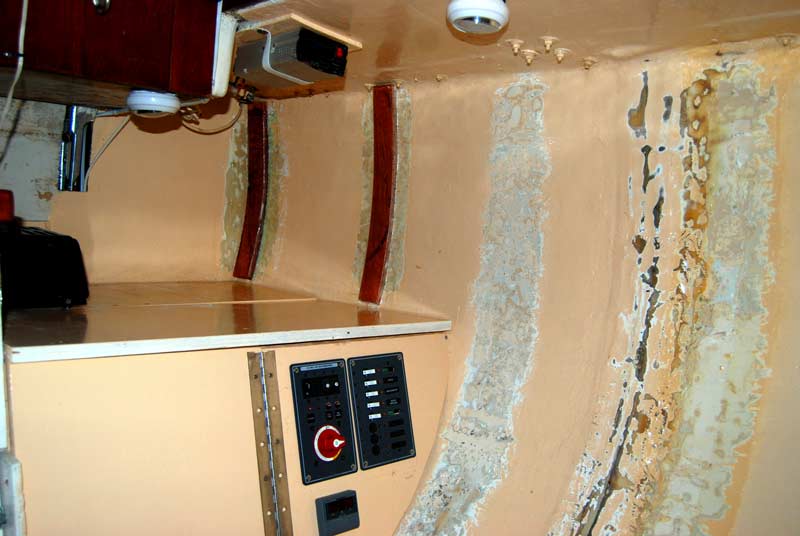 And then began work on the two that had foiled me before.  This time, I used my Dremel to cut channels in the backs of the battens.  It took a little trial-and-error to get the best gap between channels in order to have enough bend, but I got it.  The channels ended up far, far wider than I’d wanted, but I didn’t have a Dremel bit that would make a thinner channel.  Oh well – doesn’t this look great? 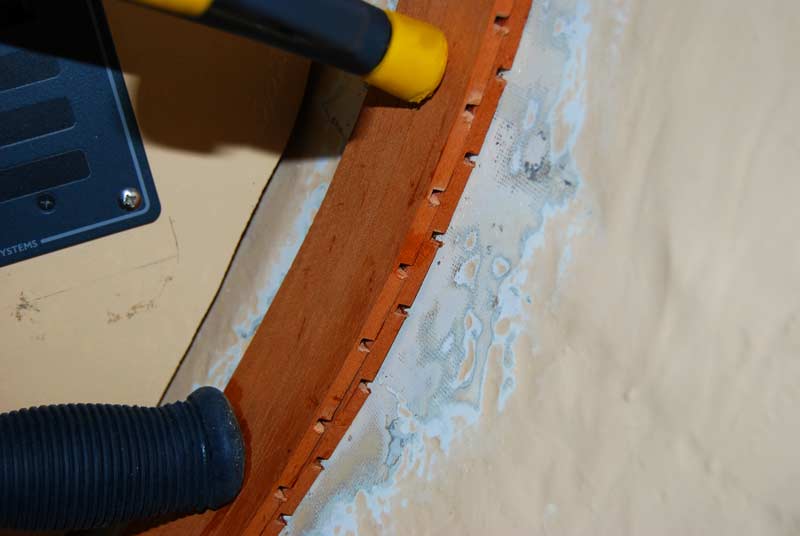 The curves were still intense, and the cleats had to be seriously braced. 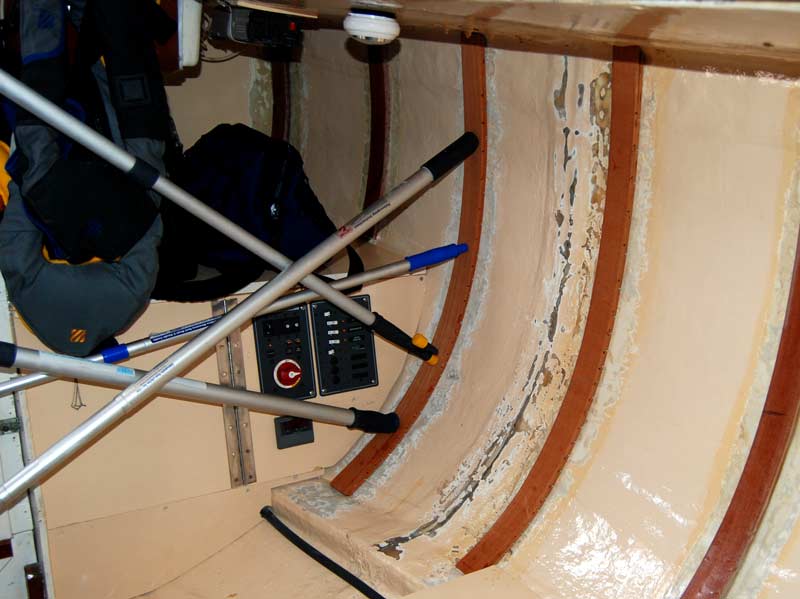 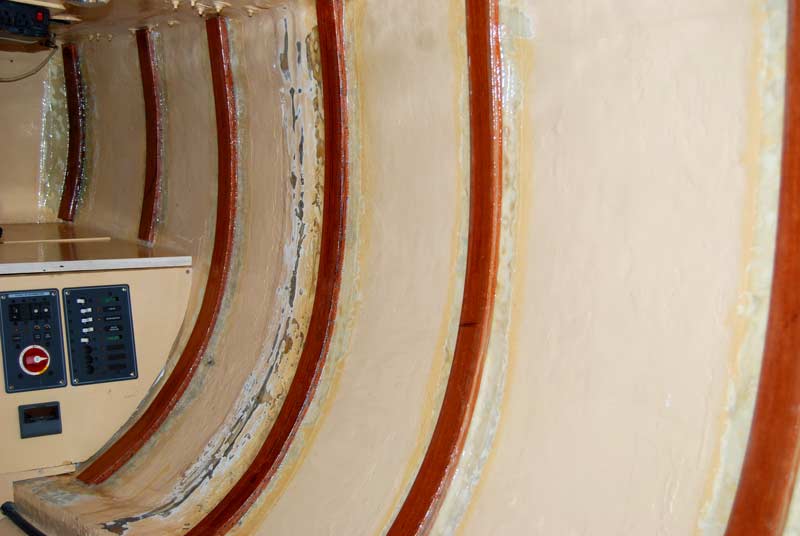 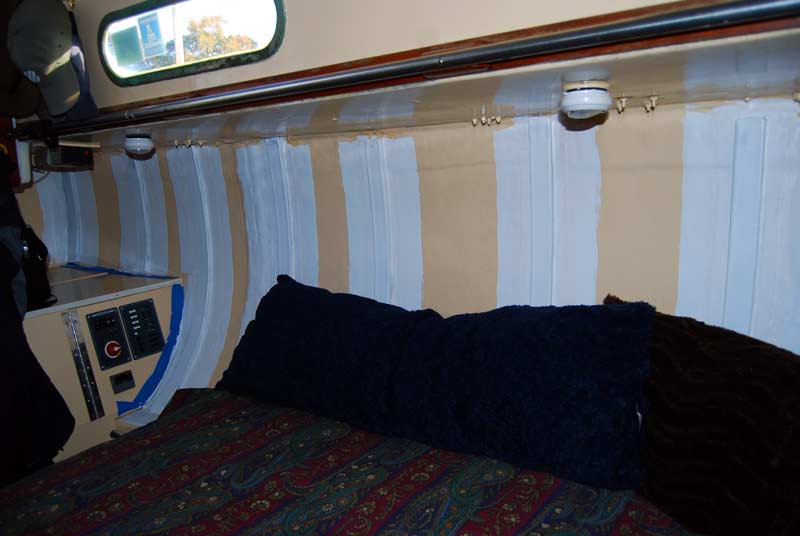 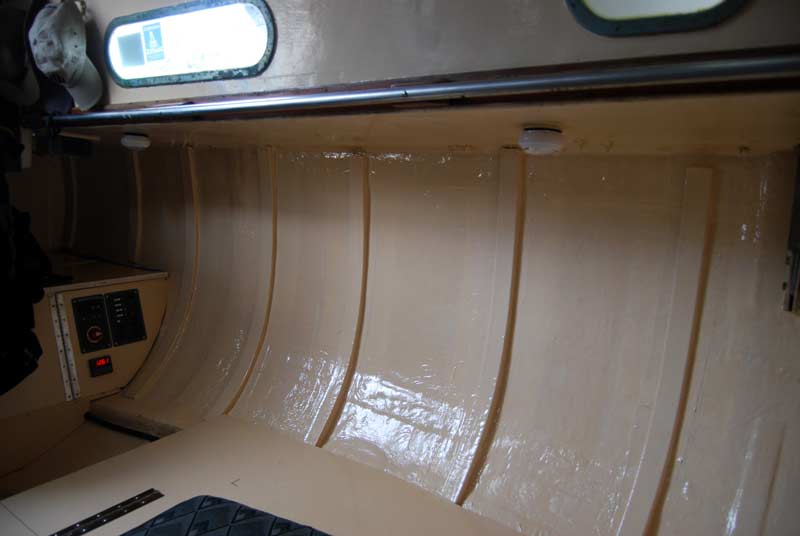 After all that – because it takes days to prime and paint, what with drying times and such – applying the horizontal battens was an absolute pleasure and a pretty quick project.  We started at the top in order to get a good line and useful gap.  The method we developed came quickly.  Hold in place, using two pieces of the 1/4″ scrap to ensure a 1/2″ gap.  Screw the batten into the two middle cleats and then warp down the forward parts with the scrap bits and screw, warp down the aft parts and screw. Each screw was driven only most of the way in, because we had one more task before we were done.

The first couple went smoothly, but we were expecting that.  The curves don’t get intense until the bottom.  James and I did the top seven together yesterday morning before he went to work.  I put up the last eight while he was at work.  They did get harder and harder, but just inching the scrap along each board worked to bend the board into place.

Adding finish washers and epoxy was the one-more-task I mentioned above. I removed each screw, put a finish washer on it, wet the end with epoxy, and drove it.  There is enough pressure on some of the battens that I need those same scrap pieces to maintain its position.

In this picture, the screws above the pieces of scrap are completed – the rest are yet-to-be. 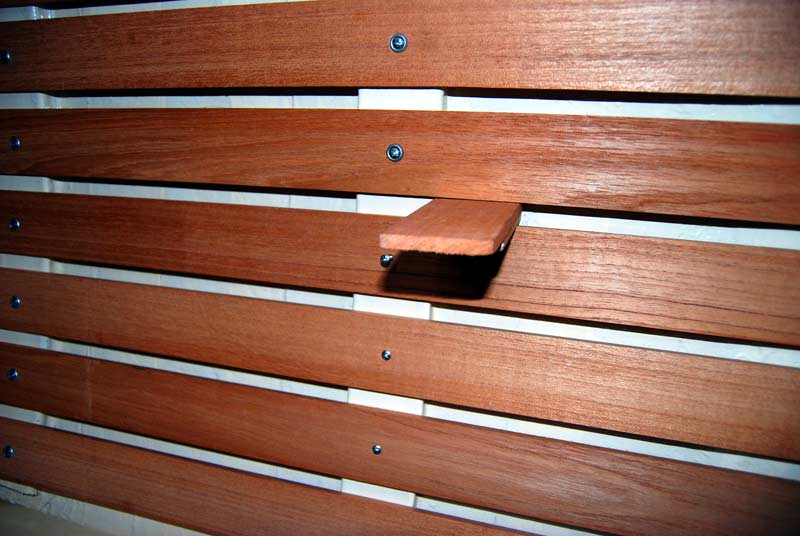 Cutting the curves in around the electrical box was tricky, but the end of the day saw me well satisfied with this. 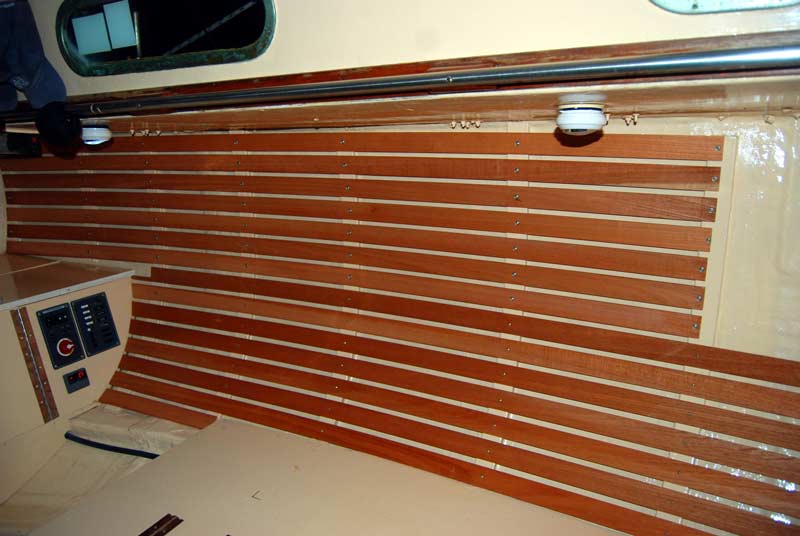 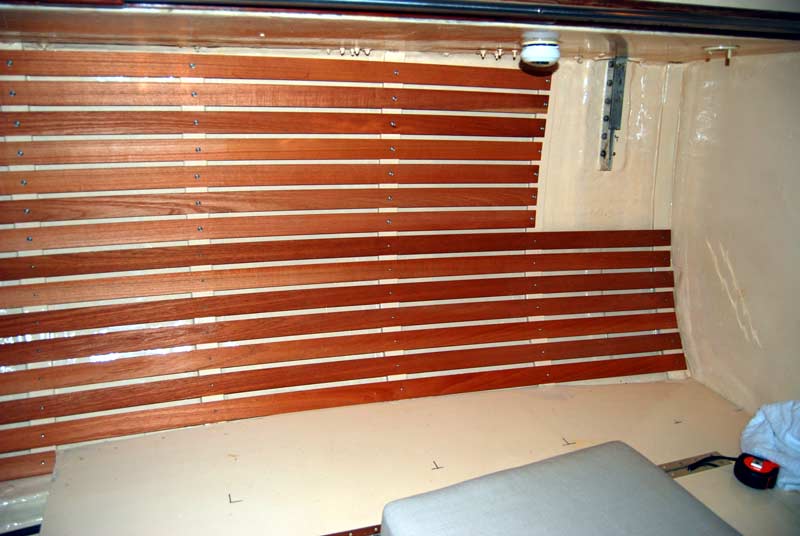 Now.  Just for contrast, please see exhibit A, from just after we demo’ed the old, jerry-rigged and ridiculous cabinetry. 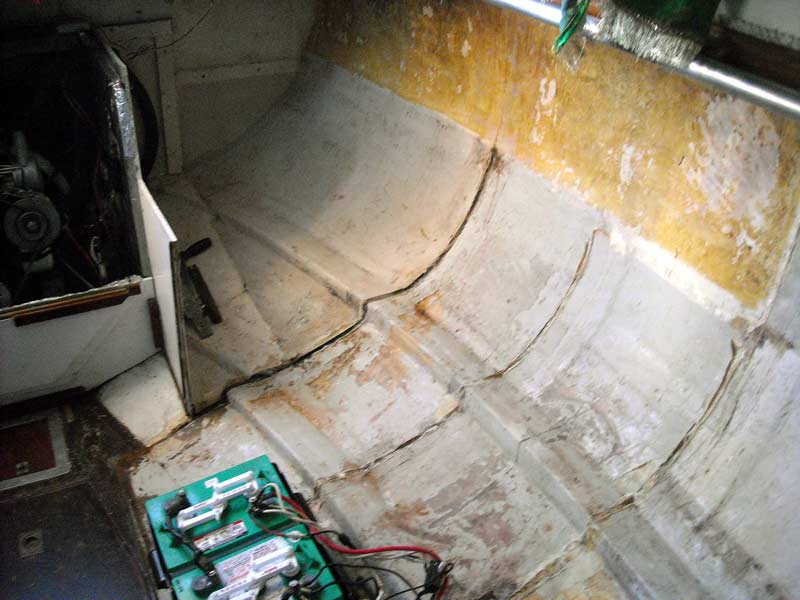 And exhibit B, wherein I sit on a chair made of two cushions placed on bulging tool bags, with my West Marine shirt on and my hair looking pretty damn good, if I do say so myself. 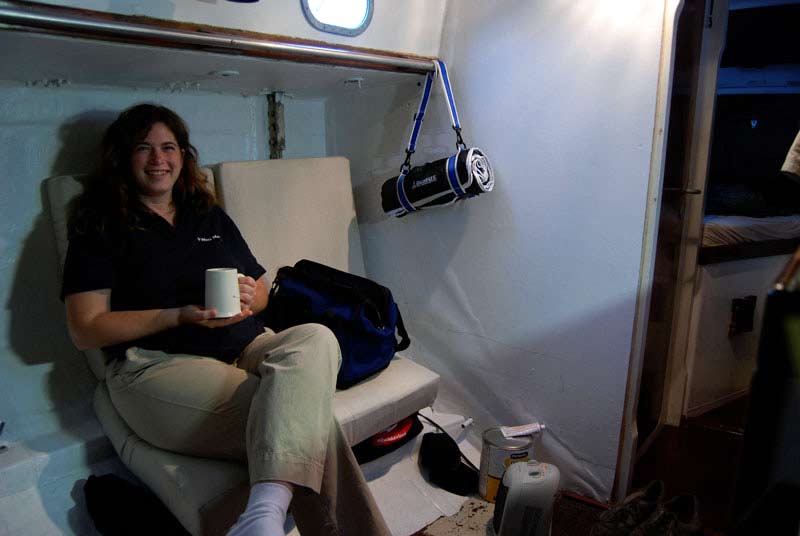 Now contrast that with this happy man, who just came home to an unexpectedly finished project. 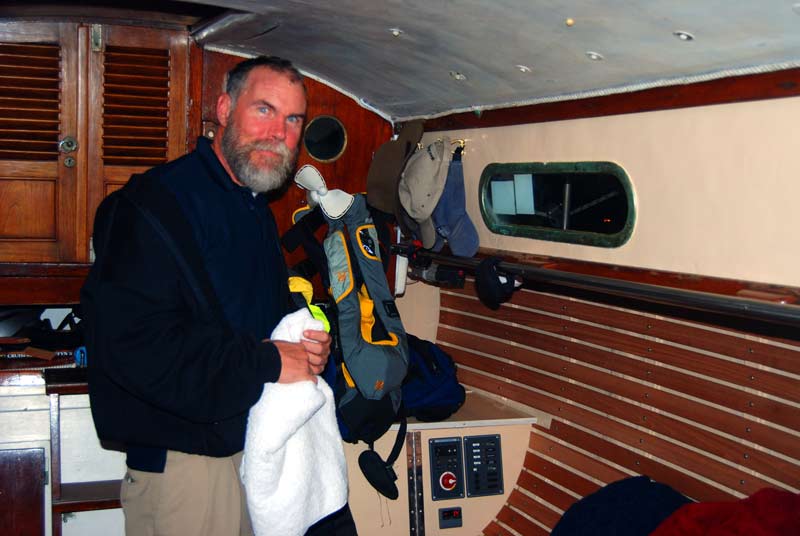 And can you blame me for looking a little bit smug? 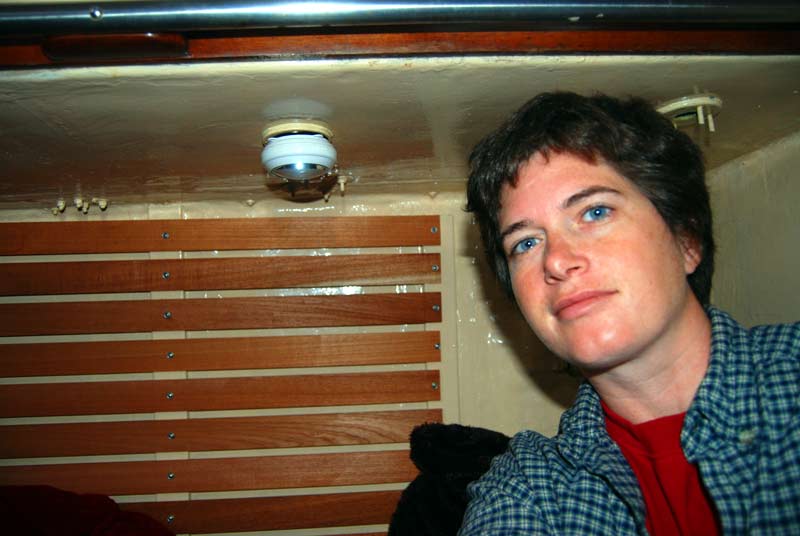