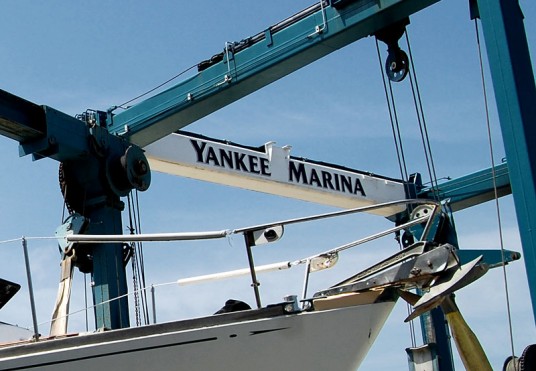 We’ve hauled our three boats out of the water a total of 7 times.  Each time, it’s been fucking miraculous.

For the two weeks we had our boat on the hard at Yankee Marina in Yarmouth, ME, we worked 10-14 hours a day, every single day, rain or shine.  We woke between 5am and 7am and went to bed as early as 9:30pm one night, but mostly between 11pm and midnight.

So when we say that it is hard to give a detailed, blow-by-blow account of each thing we did, it’s because we did so much.  The projects were multifaceted on every level, but really it came down to two major projects.  One – the sagging, rotten deck.  Two – the broken bulkhead below.

Rather than tell this story in painful detail, here’s the last two weeks in pictures. 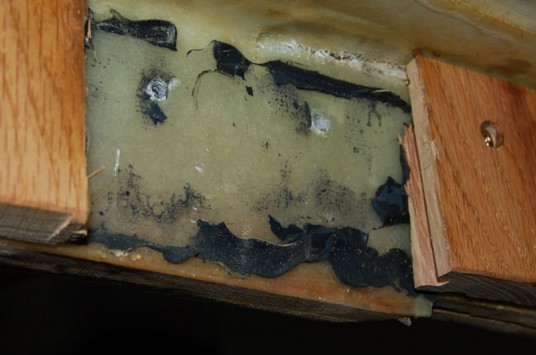 This is the crack in the bulkhead, before we pulled the mast.  As you can see, it is completely separated along a vertical axis and cracked horizontally above right through the fiberglass, creating a sag where the mast wants to pull through the deck. 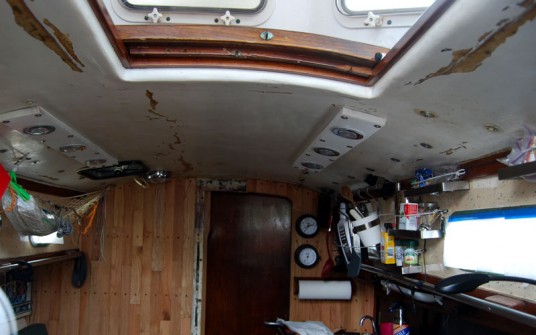 This caused cracking all throughout the coach roof. 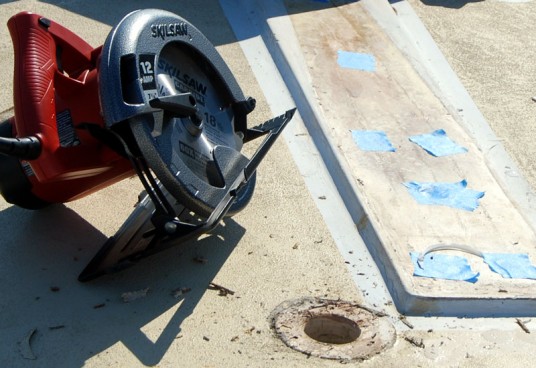 Once the mast was pulled, the compression system removed, and the step unbolted, it was time to make the cuts. 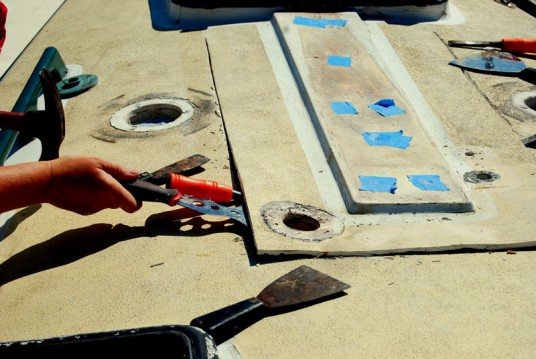 We set the Skilsaw at 1/8″ and cut along the sagging seam of a previous repair.  In an attempt to salvage whatever intact core material we could, we carefully chisel and pried the top skin upward.  The second goal was to keep the top skin intact in order to use it again rather than recreate it. 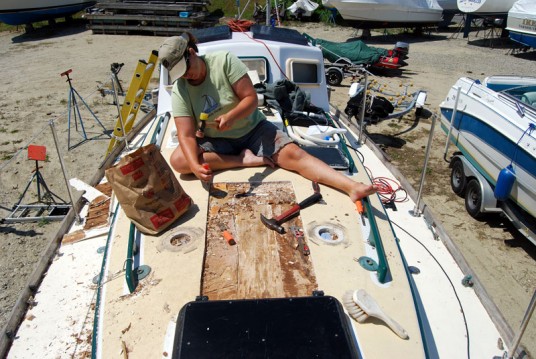 Instead of a tidy edge and an intact skin, the previous owners had done a very strange repair that forced us to clear the entire area of rotten material.  We also couldn’t use the skin, because it had been drilled through dozens of times by a (probably different) devious owner who was trying to fix the rot by the “drill and fill” method, whereby you make holes and force some epoxy in, hoping it will seal off the rotted parts…this is putting a bandaid on an ax wound. 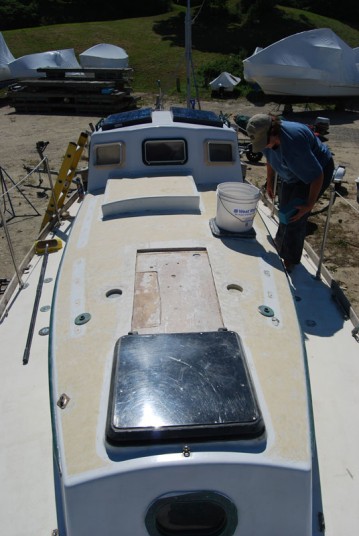 When you’re dealing with fiberglass, it’s best to stop and clean every 10 minutes.  Being as though that’s not a realistic working method, you have to live with it.  We did a pretty good job.  We kept up with it the best we could, cleaning the whole boat over and over again while living in “the desert” as that portion of the marina yard is known by the workers.

All the chemistry we use requires a clean, dry surface.  That’s another reason all of our work was two-fold – make the mess, clean it up.  After creating the clean slate in the picture above, we cut two pieces of azek (pvc lumber) for the new core.  We laid fiberglass on the bottom skin to reinforce it and then epoxied the azek down on top of that. 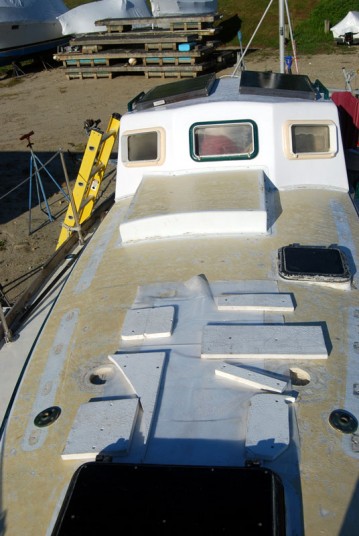 The odd pieces of azek are forcing the core pieces to conform to the curve of the deck. 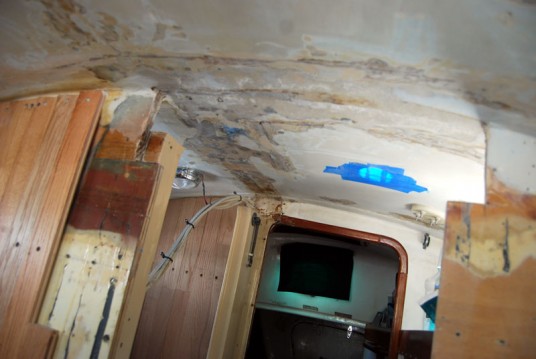 Once the new core was glued into place and firm, we started the demo below.  This time, we used the grinder to take the bulkhead off completely, including the tabbing that holds it to the roof.  Last time, I chiseled the bulkhead out from between the two layers of tabbing.  This is much stronger. 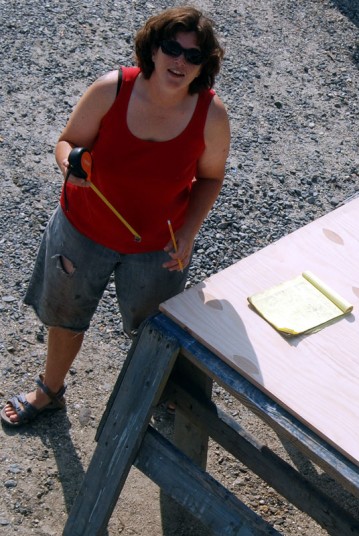 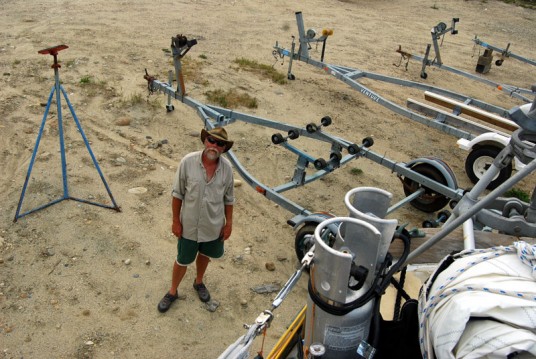 James in the desert. 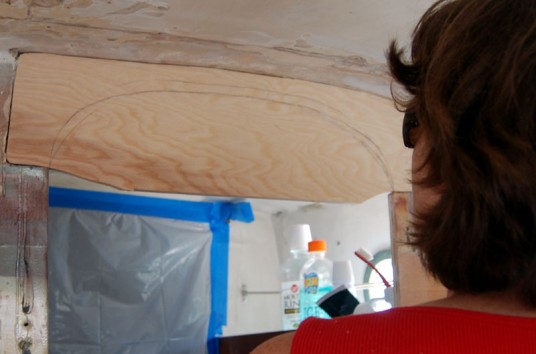 Once we had the new bulkhead piece cut to fit in place, we had to sketch out the curve we wanted for the hatchway. 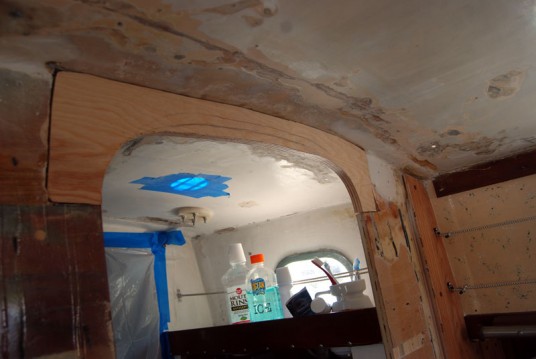 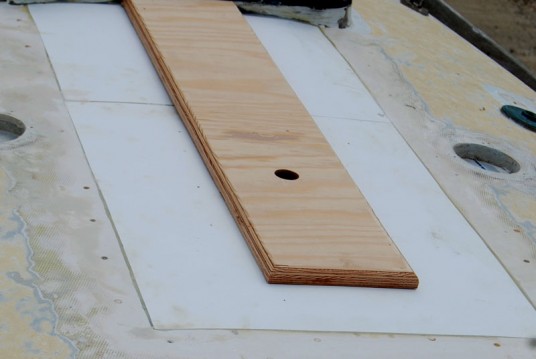 Abovedecks, we used the same 3/4″ marine-grade plywood to create a new, solid base for the mast step.  Actually, we bought a half-sheet of the stuff and ended up using it all!

The other thing shown by the picture above is the smooth transition between fiberglass skin and azek core.  We increased the thickness of the core under the mast and made the plywood base a little thicker too.  We want this thing to be solid! 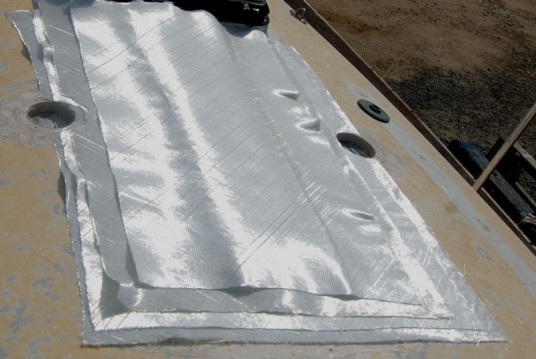 We bought biaxial fiberglass, which means two layers at 90 degrees sewn together rather than woven, with a fiberglass mat backing sewn on as well.  This is thick stuff and both torsionally and compressively superior to fiberglass cloth – the stuff we used before.

The four layers are laid into place and cut in decreasing size.  This allows us to grind it smooth without going through any layers except at their edges.  Once the pieces are prepared, start pouring on the epoxy. 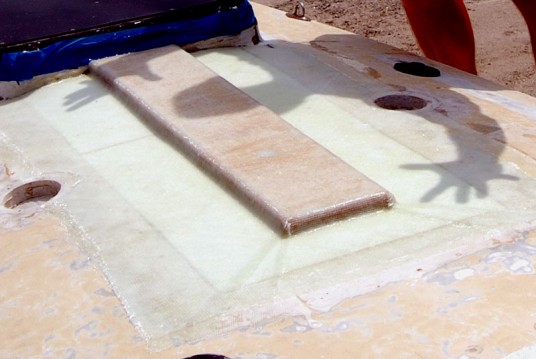 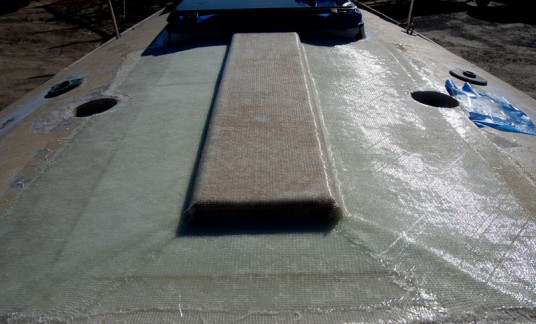 All four layers in place, epoxied, cured, and ready to grind.

By the way, we used a gallon and a half of epoxy resin on this project.  Some above, some below. 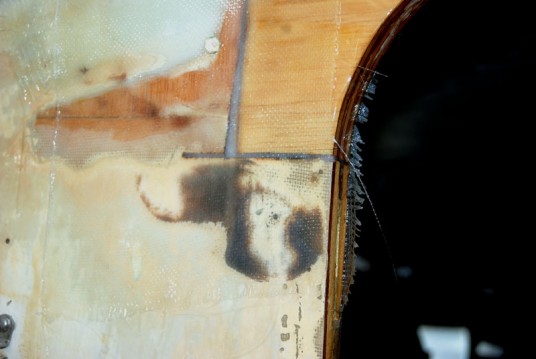 When this is stuff is ground down and finely sanded, it creates an all-encompassing powder that coats the lungs and makes everything taste like plastic.  Yum.  And since the powder consists of tiny glass fragments, it creates rashes that burn and itch like hell for weeks.

It must be ground and sanded or it creates sharp pokey things that cut right through clothing and skin.  We not only want to keep our clothing and skin intact, we also want to have a smooth, even surface once the paint is on.  That means grinding, sanding, and as seen below, fairing. 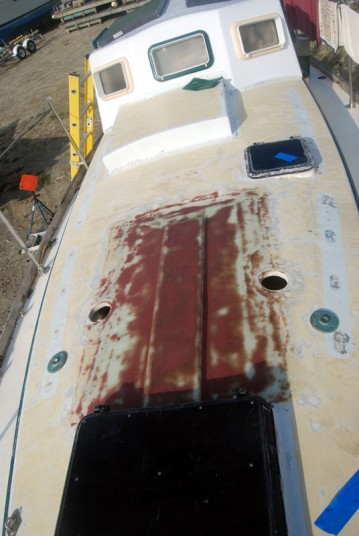 The brown parts are an epoxy fairing compound that sands easily and makes a smooth surface. 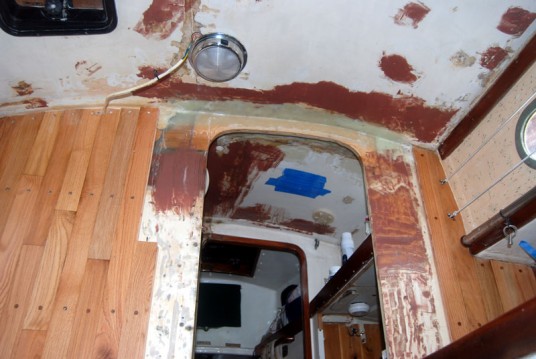 We also got to do all that down below.  From grinding fiberglass in our living area, through cleaning it as well as possible out of said living area, to more sanding and grinding than we ever want to do in a space where we create food.

Just through the hatchway in the photograph above is where we sleep. 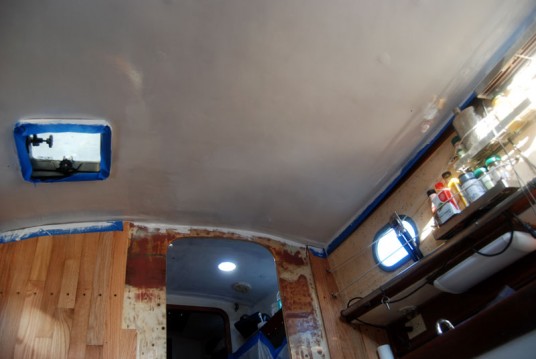 But oh, it does look good with a fresh coat of paint.

Or, in the case of the deck, with several coats of paint, a mast step, some hand rails, a solar panel power inlet, and a couple solar vents.  She’s ready to go. 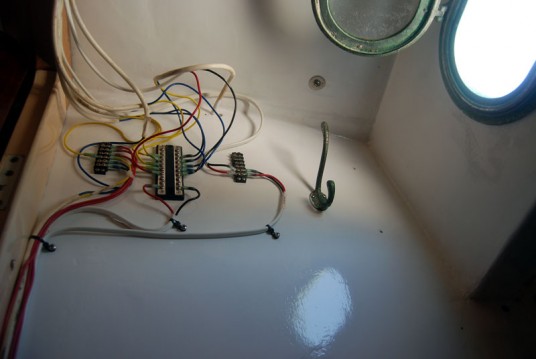 The paint in the head looks great too, but the smell of marine grade chemical just won’t leave!  The electricity was dangling while we did the job and it’s not all the way back together in the photo above.  We couldn’t finish lassoing all the cables into zip ties until the mast was in place and its wiring brought into the mix. 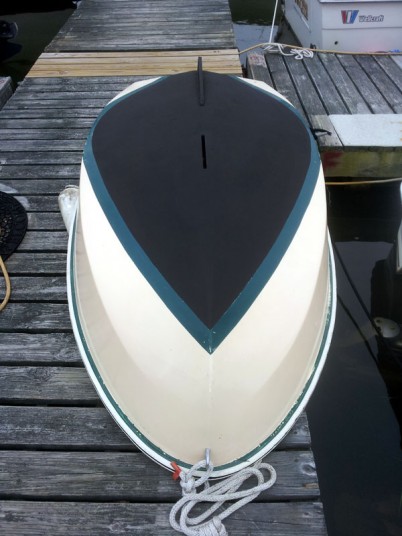 Oh yeah.  We also bottom-painted the dinghy and rebuilt the solar panel that goes on it while underway.  (Remember the Delaware Bay?  We never want that to happen again.) 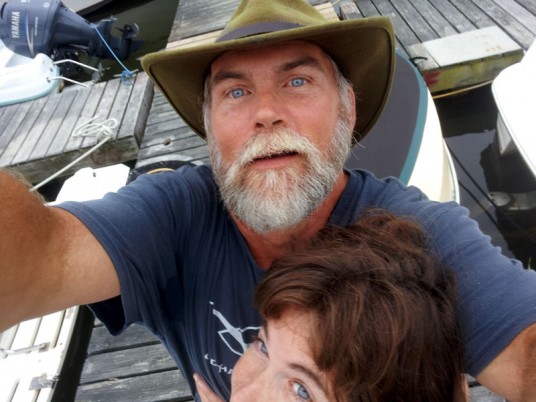 This is us.  Exhausted, exhilarated, and thrilled to be underway again.

We got put in the water around 9:30am, the mast was upright by 10:30, and we had her tuned with the boom and sails on and everything by noon.  After a couple hours of motoring down the Royal (Pain-In-The-Ass) River, we settled back in Broad Cove and got eaten by fog. 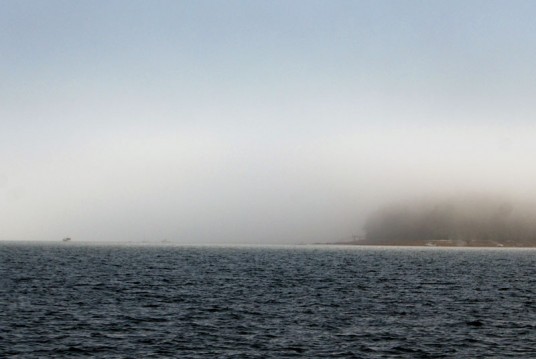