We’ve been living on the edge of civilization for a couple weeks now.  The public dock, Knightville Landing, provided us with free water and dinghy landing.  It is also the center of pubescent life for South Portland. 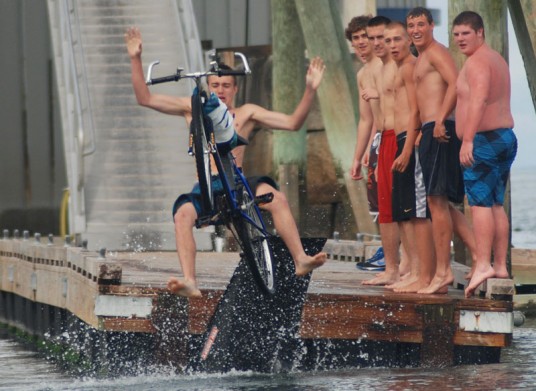 Check out how they’re all waiting their turn in a neat, tidy line.  These are good boys.

The large ships coming through the bridge and up the river gave us good doses of adrenaline periodically. 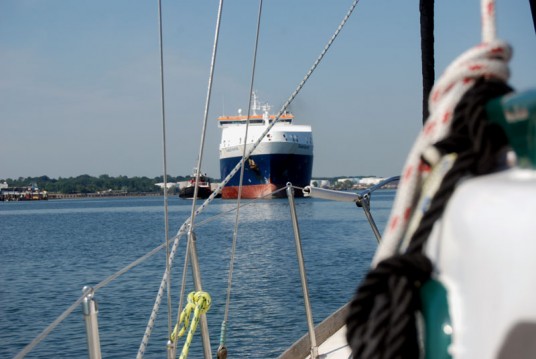 Here’s the same ship, passing us alongside. 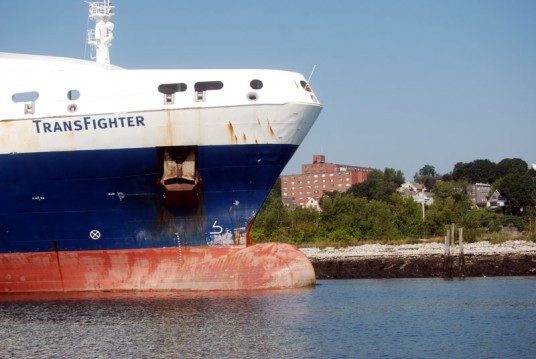 And here’s a closeup.  A crop of the bow so you can get the scale of this vessel. 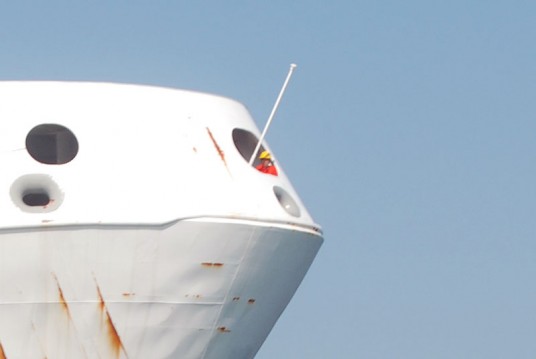 The red spot in the hole at the front of the boat?  That’s a person.  For real.

Meanwhile, the boat sat at anchor.  Well, at anchors.  We settled in and realized that wind and tide were pulling us out into the channel and in where the bottom shallows quickly.  We got ourselves solidly hooked on the bow and then put a smaller anchor into the dinghy and rowed it out behind.  With one anchor off each end of the boat, we swung gently like a hammock without getting in the way of anything like TransFighter. 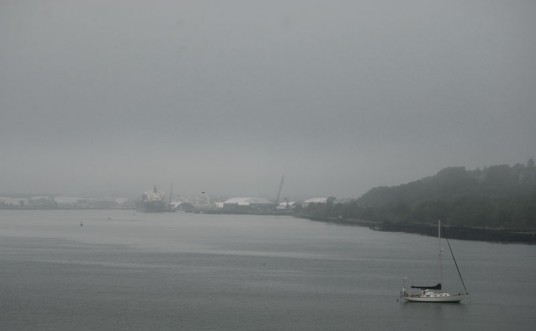 I (Dena) started work at EqualityMaine or Mainers for Marriage Equality, depending on whether we’re working with donations or campaign funds.  It’s a good organization as far as I can tell, though phone canvassing is as hard as any other out-bound call center work for the most part.  I’ve got the script down pretty well, and the rest is a lot like counseling with an agenda.  I’m supposed to draw people out on their concerns about same-sex marriage so that I can assuage those fears and counter the arguments.  It works sometimes.  At least a couple times a night, I get someone to move from somewhat opposed to somewhat supportive of gay marriage.  I could be doing worse work.

But it’s so, so different from sailing around and hiking and working on the boat a little.  A little painful, in fact.

As therapy, we worked on the boat last weekend.  After working on the deck, we had some areas that were painted but slick, so we painted them with non-skid. 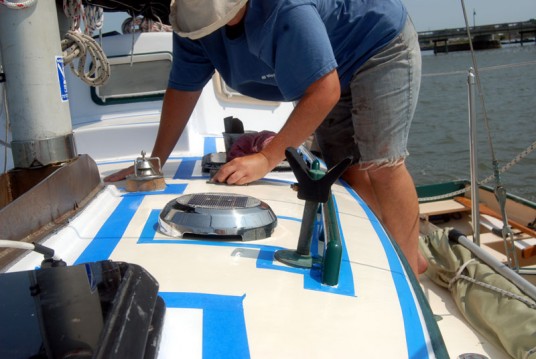 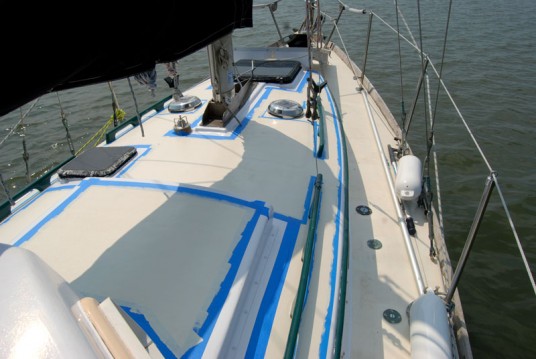 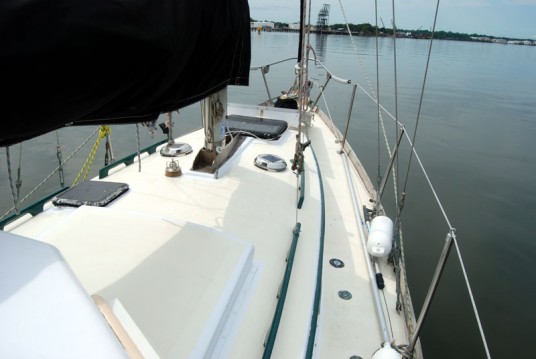 And we finally put non-skid on the cockpit sole.  That’s been a long time coming. 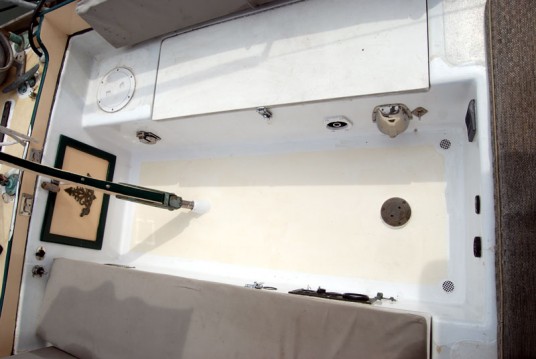 Dena put in the good word and after a week of shooting blanks into the local Portland job market, I decided that the do-gooder work was a worthy endeavor.  So I interviewed with EqualityMaine and quickly went to work for the Republican Tea-Party Radical Right-Wing opposition to Dena and we called each other all night.

Good evening.  Is this…?  Hi, my name is James and I’m calling Mainers tonight across the state to talk about some very important issues we have coming up in the November election.  I’m speaking specifically about marriage between same sex couples.  Would you say that you are strongly supportive, somewhat supportive, somewhat opposed, or strongly opposed to same sex marriage?

I pull the phone away from my face and say, “Really?  I just got a fuckyoufaggot.”

She sounds so sincere that it genuinely breaks my heart.

Especially since we come home to this. 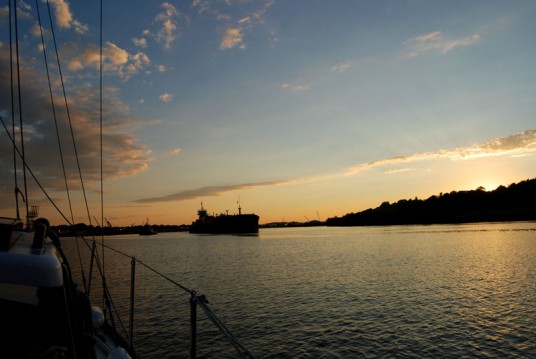 As weird as this shit is, you have to admit that it’s amazing. 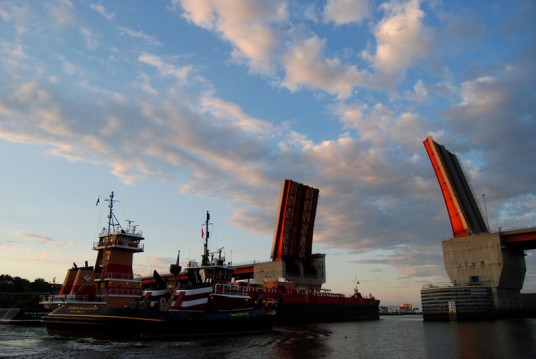 The work schedule is 1:30pm to 9:15, so mornings are nice.  We have our coffee and read a bit and eat breakfast before we ride to the YMCA, work out, shower, and head to the office.  The loveliness of the industrial area started to wear off, but the big ships never got old. 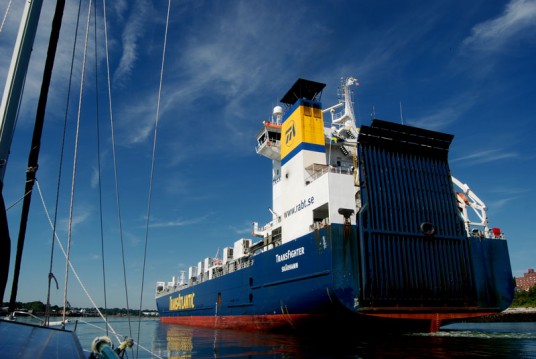 The goo started building up on the bottom of the boat and on the anchor rodes.  We realized that the shit processing plant didn’t smell horrible all the time, but enough to prove that it was part of the environment. 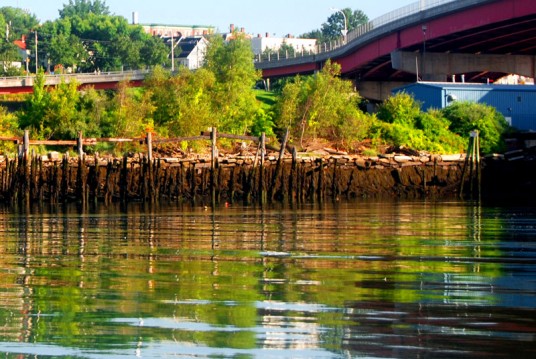 That is post-processed shit on those pilings combined with a hundred years of fuel oil runoff and whatever it is that those tankers are carrying.

And so we determined that it was time to leave.

We pulled up each anchor and moved to the public dock.  A good scrubbing and full water tanks made us ready to go, but first we wanted one more picture. 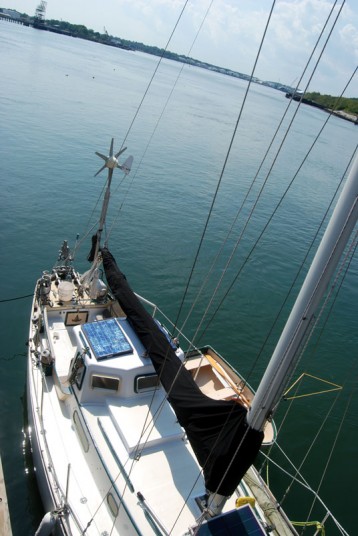 Heading out of the Fore River under full sail, the boat performed absolutely flawlessly.  She settled into a course that took us straight to our first anchorage in Maine – right off Great Diamond Island.  We dropped the Bruce in about 18 feet of water and immediately settled in and went swimming.

The water was freezing and the perfect sailing wind caused just enough chill to bring the 75 degree day below our Chesapeake-acclimated threshold.

It was wonderful.  The water was clean and clear and the boat had shed her beard of toxic slimy growth from the Fore River.

Another easy sail back to Portland and we puttered around, checking our new anchorage for swing room.  As soon as we dropped anchor, it buried deep and we are now firmly tethered to the ground 25 feet below us, right off Pomroy Rock. 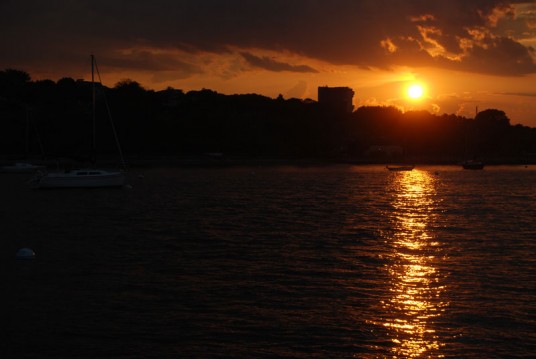