About a month ago during a staff meeting, I (James) brought up the fact that it would be fun to do a slide show for our residents about our adventures at sea over the past 13 years. Well, all the other managers agreed so I booked it for the middle of the day on a Thursday, one of our regular work days. Well, our community’s eternally befuddled enrichment coordinator scheduled a stupid X-mas event right on top of our show and then rescheduled our slide show on one of our days off. We were supposed to get three days off in a row this week because of that ridiculous holiday, that I’ve already mentioned too many times in this post, but alas it was not to be so. Anyway, we rode to the boat on Tuesday, worked all day, and then rode back to the community so we could do our slide show. The show went off to a full house, although rife with technical issues concerning a dead remote control. We did it and then we rode back to the boat.

After a five mile ride through the woods we’re flat-out hungry! So we park the bikes in front of the boat at the marina and walk to the Seahorse, all of 100 paces away from the boat. We kick back, order a pile of Happy-Hour priced appetizers and shortly thereafter, start stuffing. Oh, it’s so good! Clam chowder, baked mussels, seafood dip, fresh baked bread… Oh yeah!

We stumble back to the boat and pull out the literature.  (James=Cryptonomicon, Dena=The English Patient)

When James takes a stroll up the dock an hour later, he yells, “Dena, your bike is gone.”  I jump up and stuff my feet into my boots.  There’s no sign of fresh scrapes on the anchors, bow, or power cable, so it’s unlikely the bike fell into the water.  I look around blankly and James takes off on his bike to see if he can find mine.

I walk around the boatyard for no good reason except burning some angry energy.  James is doing the same on a grander level – he rode all the streets of Noank Village and checked the public beach.  No love.

When he got back, he locked his bike to a shroud and came below.  We commiserated on the frustration and irritation and anger.  Bike thieves suck.  The practical aspects slipped through my mind – how to get back to the community, how to eek out enough money to buy a new bike – but emotion was stronger.  I retreated to my (very good) book and left James to his.

The next morning, we went to breakfast at Carson’s.  The regulars were surprised by a theft, but mostly agreed that someone had gotten drunk and borrowed the bike to get home.  Or had come off a boat and realized their ride hadn’t shown up and borrowed the bike.  Basically, any story that didn’t imply a bicycle thief in their midst.

One denizen mentioned that he’d bought his bike at a Groton auction – 5 bikes for 5 bucks.  He still had a couple extras – I could have one, nothing fancy, if I liked.  Since rolling is almost always better than walking, I (Dena) liked.  The bike was exactly what I expected, an 80’s era Huffy that worked, if not well.  Heavy as an anvil and loud as a rattlesnake on the state park trail, but hey.  It got me back to the community.

Whew.  Shaking off that whole debacle.

Before we rode back to the community we worked on the part of our new project that we both least enjoy, sanding and fiberglass. 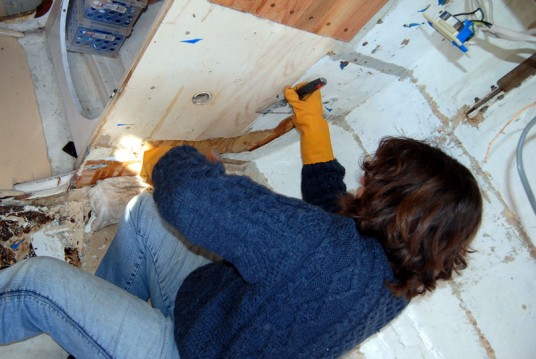 Because I (James) still have a great bike I rode to Mystic to do the measurements on our new refrigerator while Dena stayed behind and finished the demo on the forward galley bulkhead. 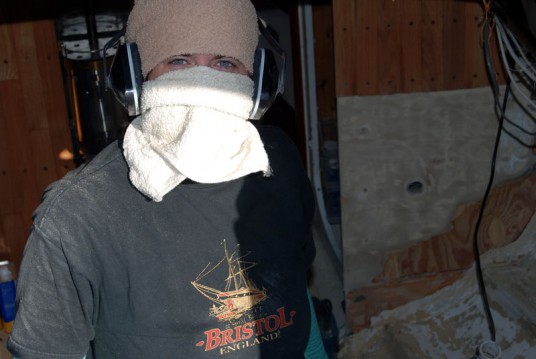 By the time I got back Dena had the demo pretty-much done so all we had to do was clean up for the epoxy and fiberglassing of the bulkhead and one other small damaged place aft of the galley.

We cleaned up the work site, swept and vacuumed and then washed all the surfaces down with acetone. After that it was fiberglass time.

We had a bunch of that really thick, 3-ply fiberglass left over from this summers deck project so rather than going out to buy a full sheet of thin interior fiberglass cloth we just used what we had. Well the only problem with that was, it took 20 batches of epoxy to get the glass to adhere properly, and really, that was just a ridiculous over build and we both agreed that it would have been faster and easier to have just gone to the store and bought a new thin sheet of fiberglass and put it up instead. But, as they say, overbuilt on a boat is never a bad thing so what’s done is done. 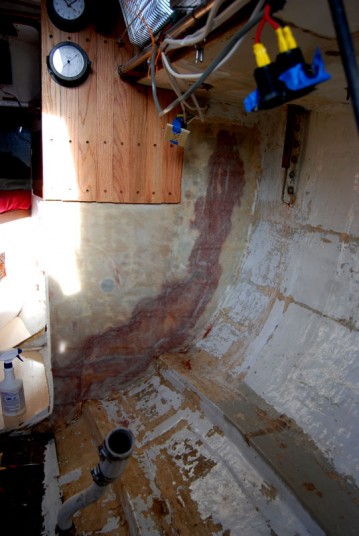 I think this could be the most bad-ass bulkhead in the history of the Chesapeake 32.

So there it is.

We’ve gotten the bulkhead rebuilt, we’ve found a new front-loading refrigerator that draws only 2 amps and will go very nicely in our old useless hanging locker. So now we can start building the new galley which is very exciting for both of us despite the fact that Noank is just another American small-town that overestimates its quaint peacefulness.