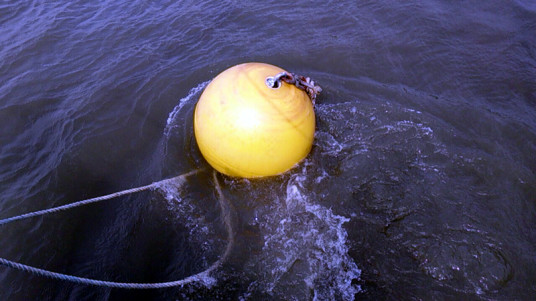 The current was so strong at 79th street that we could only get on or off the boat at certain times of the day or we’d get swept out to sea or up the Hudson.

To be honest with you I (James) never mind a good row, it brings such peace to my day before and after a wage slave shift that I’ve never really had issues with rowing either in a current or not. The current was strong and the weather was crappy at 79th Street but it never made either one of us lose a shift of drudgery.

The real reason to hate that place?

My fucking bike got stolen at the 79th street boat basin the night Dena got back from South Dakota.

Trying to own a bicycle is the very thing that turned me into an anarchist in the first place. It’s proof-positive that owning anything is impossible. I’ve had so many bikes stolen from me that I have a personal policy of beating the shit out of a bike for the entire time that I have it, simply because I don’t want the next bike thief that drunkenly stumbles up to my ride in need of the next fix to get a good deal of any kind by stealing my bike.

Although the Kryptonite company will insure a lock anywhere in the U.S. BUT Manhattan, bike thieves are everywhere and they all suck.

So even though it was, absolutely, the best bike ride I’ve commuted on (Ever!)…THEY STOLE MY FUCKING BIKE!!!

Fuck the the upper west side. We’re going to Brooklyn. 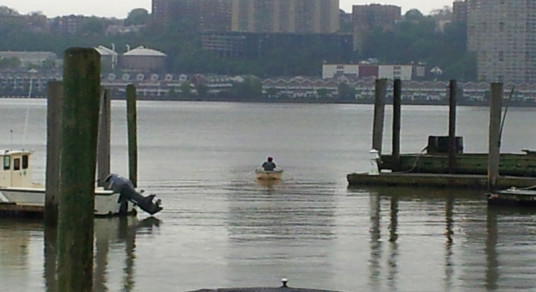 So on Saturday as the tide came around to an ebb we rocket-sailed back to the anchorage behind the Statue, put the hook down, and enjoyed a night of much needed peace and quiet. 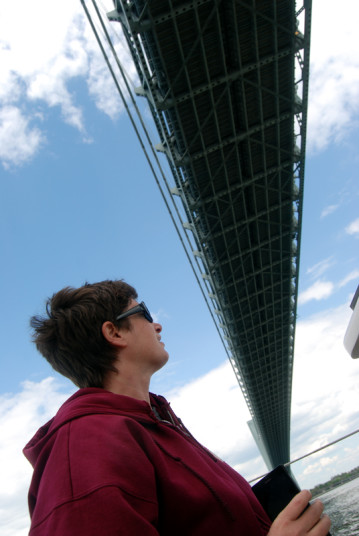 On Sunday, we sailed to Sheepshead Bay on the Atlantic side of Brooklyn, NYC, NY.

The day was beautiful with very little wind, but I (Dena) got into squeezing a little power out of the “light and variable” conditions. Of course, it’s a lot easier to be patient when the current helps you out.

We made it into Sheepshead Bay with plenty of light, so we did a circuit of the basin.  It’s basically a mooring field with a community college on one side and some marinas on the other.  Just past the mooring field, some city-owned piers hold professional boats. We shagged a ball, started up the computer, got entertained, and went to sleep soon thereafter. 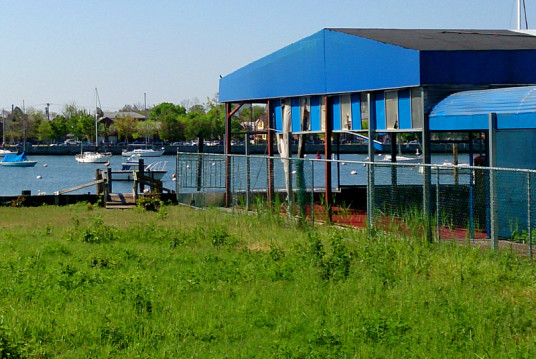 That’s us, the pretty little sailboat in the middle…

On Monday, I (James) rowed us in and we went mooring-ball-owner hunting. We were looking specifically for Mr. or Ms. Owner-Of-Mooring-Ball #63. We walked and walked and knocked and knocked and talked and talked and discovered a very cool situation where we could pay $30 a week to park our dinghy. We talked to a guy named Kenny who is the… Dock Master (yeah!) of… I don’t think it has a name. Kenny’s Dock. So sketchy it feels trustworthy and it has been now for a week straight.

Of course, we do lock the dinghy to the floats.

Since we never found out whose mooring ball we were on, we tried to anchor just outside of the main fairway for the big pro fishing/party boats. We had noted the depth in that area when we’d buzzed through the day before, but every time I (Dena) dropped 30 or 40 feet of chain after our anchor, we moved just as merrily as ever in reverse. I put 50 feet down the last time and it held for a moment…then we started moving again.

A little over an hour of dropping and raising anchor, laboriously because we still haven’t gotten the right size of gypsy on our windlass, resulted in a visit from a very nice couple who electric-motored up to us in their Zodiac. They said that we were trying to anchor in about 40 feet of water, which explained my aching arms and back, but not the piece-of-shit Humminbird telling us the depth was 15.6 feet. Of course, the fact that the display was blinking probably meant something. They told us we’d get chased off by the working boats and that the best place to anchor was right up by the hike and bike bridge.

Anchor dropped, chain laid out, anchor set, and we were not moving any longer. Finally. 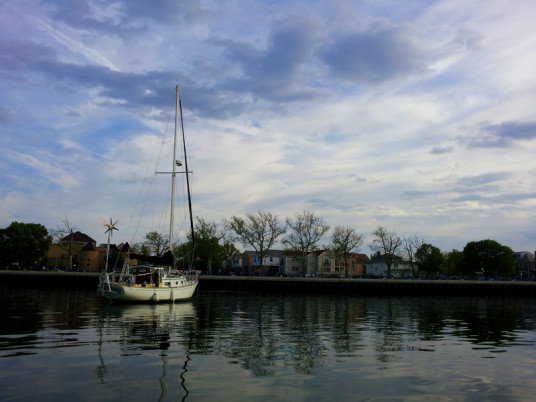 It is so beautiful up in here but there is no doubt, we are anchored in Brooklyn! The sounds and smells of the city are all around us and we have very quickly become part of the scenery. 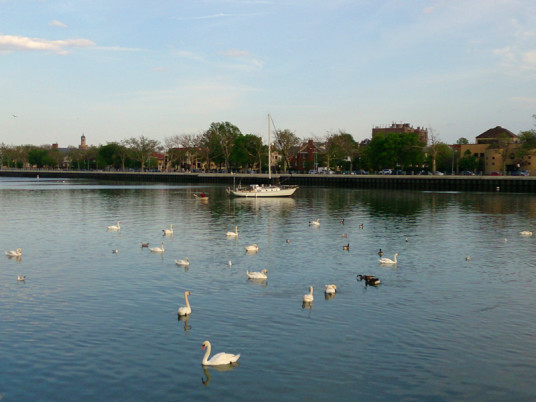 Dena rows in to Kenny’s dock in the morning on her way to work and I show up for the row out to the boat soon thereafter. I sleep in the day and I work at night like the troll I am, while Dena spins and throws her hat in the air in the middle of times square singing “You’re Going to Make it After ALL!!!” 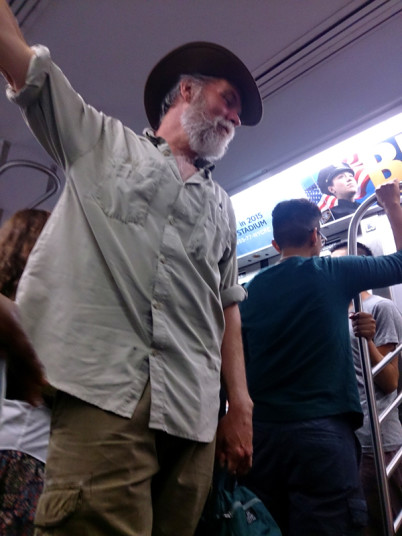 I love walking all over Manhattan, getting really sweaty, and getting on a packed train… It never fails, five minutes after I lift my arm to grab the upper support pole, I get the seat directly under my armpit. It rocks. 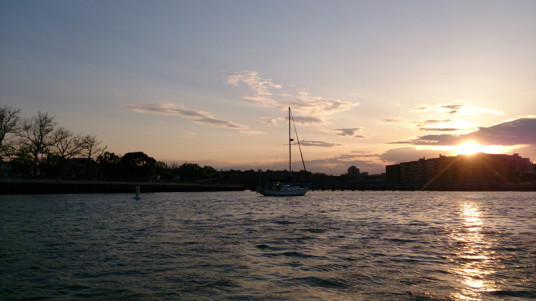 We’re still waiting for the new NSS 9 evo2 chart plotting system (that we ordered a million years ago!) to be shipped to us and as soon as we get that we’re sailing up to Braintree, MA, to help build a new West Marine up there. Or at least that’s the plan right now… and until then, we’re in Brooklyn, Baby, under the radar and off the grid.