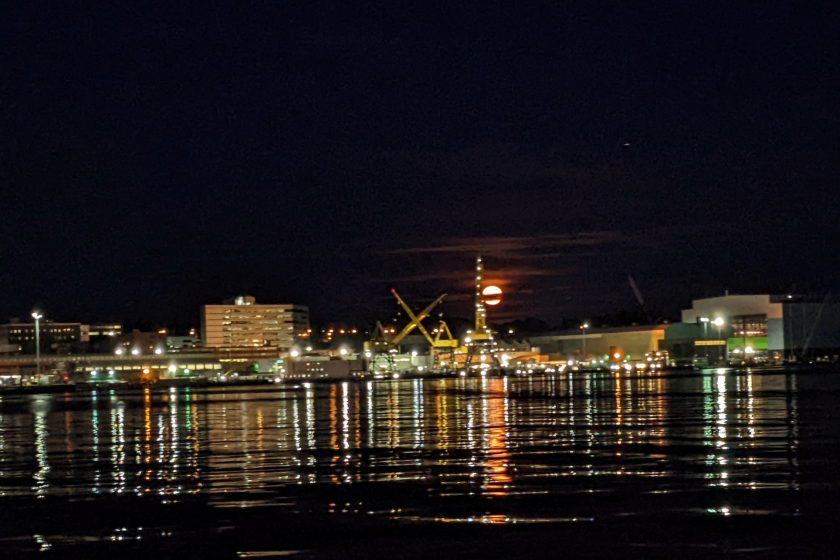 Sailing away from the City of Sin in the final week of May gave us our first clue as to the complex shape of our learning curve.

We were later than we liked getting off the dock for every reason we’ve already written about and they were all good reasons. It was cold and the boatyards of the North Shore rebuffed our attempts to give them money for mast and bottom work. So, the projects we focused on were improvement-oriented. We spent our last few cold weeks in Massachusetts installing a brand new 12 volt electrical charging system, upgrading to a better manual windlass, completely rebuilding the portsides lazarette hatch (the only real remediation project and one that was deeply needed), and rehabbing the dinghy bottom. We trusted that the boat we sailed into Lynn in November of 2021 was the same boat we sailed away from there.

We were wrong about that. Cetacea needed more than new gear. We have spent (almost) the entirety of the last two months repairing the unseen damage of a truly terrible winter while also dialing in utterly brand-new systems. With hindsight being, well, you know, we should have been inspecting the whole boat, especially the parts we’ve never had to give much thought to, with a fine tooth comb while we were rebuilding the dink and installing our new electrical system. Even so, there’s no stationary test for boat balance under sail and no foreseeing how much work would be necessary in order to account for everything we’d changed.

We expected a learning curve. We’d added weight to both ends and windage aft. We’d loaded Cetacea with massive amounts of food. We knew that there would be some effect and expected to tune both the rig (once we could find someone to unstep and restep the mast for us) and the allocation of weight in the various spaces. We expected to find problems in our shakedown cruise and fix them. We did not expect what happened.

What we learned very intensely over the past few months is that our shit was beat to fuck by a marina that was beat to fuck. The horrible state of the marina and the pounding we got in any wind between west and southeast were the main motivating factors for us getting away as fast as we did. That was the most brutal winter we’ve ever spent on the boat and we surely felt it. Since we did, it’s now obvious that we could have expected what we discovered. Believe me, Cetacea took the brunt of it.

There were more days under ten degrees than we ever want to see again for the rest of our lives. We tried to keep the boat at a liveable temperature, which has worked in the past for keeping the engine above freezing, but the temperature shocks were too intense. The constant jerk and snatch of the dock moving just before the boat on each snarling wave wore through docklines, of course, but also put every part of the boat through cyclical stresses that we’ve been recuperating from for months now. What wasn’t shaken loose was left brittle, including the timing gear cover gasket and bolts. Remember that shit?!

Too many systems we once thought completely functional have been proven otherwise and rebuilt or replaced. We both now believe the boat is sturdy and seaworthy, just in time for our weather to go to shit.

Today, anchored in the Great Salt Pond of Block Island, is our first taste of what I (James) believe to be our new weather norm. Strong winds to gales from the southwest clocking around to the south-southeast throughout the days and calming overnight. It’s pretty shitty for an easterly run across the Atlantic but an almost perfect recipe for a Downeast reach to Canada followed by a coastal cruise south with the first nor’easters after the hurricanes. We know this one. Hell we even love this one as long as it takes us at least 1000 nautical miles south of New England for the winter.

We figure, since we’ve done so much to get the boat so shipshape, the only thing we really know for sure is that we’re going sailing and we’re going to do it the only way we know how…as prudent sailors, with the wind and the lessons we’ve learned along the way.