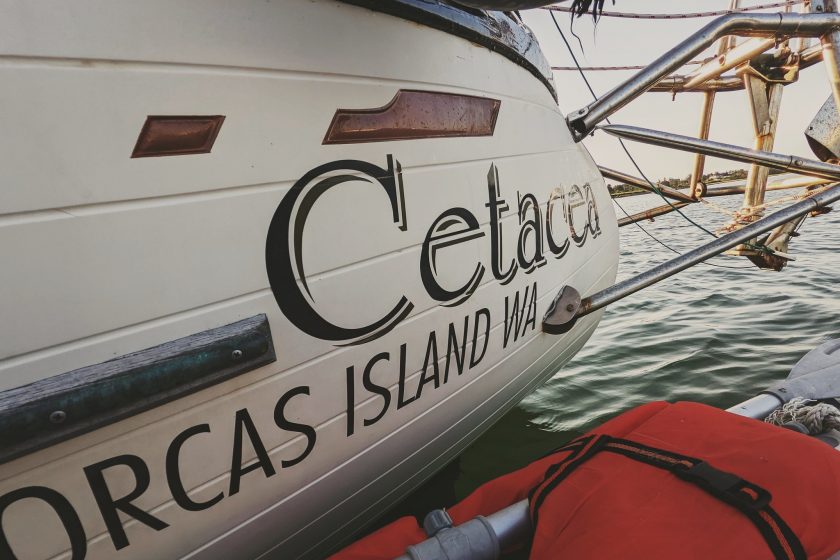 The shadows were getting long like it was autumn but it felt all too soon.

The anchorage in Yarmouth, Nova Scotia, is beautiful looking west to Doctors Island. It’s one of those places that looks exactly like it would’ve about hundred years ago. The sun sets over the island and the green rolling hills beyond are a reminder of so many things we’ve lost looking East.

East of our anchorage was a seafood processing plant with three resident purse-seining vessels that go out every night. Every morning they would return to the docks after a night of scooping the life out of the ocean and they would unload their bellies into the plant for processing. One giant vacuum would suck the fish out of the holds and another would suck the bloody by-catch into a giant Dr. Seuss machine that would in turn bletch bloody gruel into a giant vat that opened at the bottom with massive jaws. An eighteen-wheeler would back in under the vat and the jaws would puke the guts of the sea into its spill-proof aluminum catchment. Every day, every single day, this happened right in front of us.

We were impressed that they shipped away the effluvium, enjoying the thought that nothing went to waste. It would become some kind of nutrient in some kind of product, and that seemed better than the alternative.

And then they cleaned the vat.

The waters around us turned dark with blood, sudsy highlights only making the horrible truth clearer. The bloody feast attracted the swarms of sea birds that had been circling the boats and the large harbor seals that never seemed to hang out together. I can’t imagine what the (presumably biodegradable?) soap did to them, but they were more than happy to chance it.

The waterfront has charm for folks like us – working class with some special touches.

A waterfront park with a lost-at-sea memorial isn’t uncommon, but it was rather sobering that this one had a lot of room to grow.

We got a meal we didn’t have to cook or clean up, and that made us happy.

Those 17 foot tides were impressive but the current wasn’t the kind of factor we’d dealt with many other places (the Cowyard in Plymouth, the Hudson off 79th Street, etc, etc).

The town’s character combines the brutality of the seafood industry with an energetic enthusiasm for arts and, well, queers. We couldn’t go far without seeing a pride flag, often with an explicit statement of support and welcome.

We scoped out all the nearby shops and quickly realized that we would have to walk out to the highway drag for provisions. It was a three-mile round trip, which isn’t bad even weighed down, but it got old pretty quickly.

We did the industrial route. We did the highway route. Finally, we found a hike-and-bike path that cut across and put us on a much better road to walk down.

Why would we do the walk so many times? Well, see, the weather was shit and we still hadn’t managed to get charts for Canada.

We bought the c-map chart package for Canada because we could download the charts rather than figuring out how and when to get the SD shipped to us. Our internet was absolute shit, so we paid extra to speed it up but the charts were 28 gigs (!) so that couldn’t get it done. Then we sat in the covid-era outdoor seating at a nearby cafe and finally got the chart package downloaded.

So we were in Canada without a very important tool for the rocky ledges of the coast down to and around Cape Sable. Our options were to keep using our less-than-awesome system for navigating the Canadian coast or do our big hop down to Provincetown. Or even bounce along Maine. The weather kept spinning circles, which is pretty good for gunkholing but less good for multi-day passages. Hurricane Earl tapped out south of us but still created a surge that would have made travel a barf-bother.

We did a lot of walking, made some truly amazing meals aboard, and worked on our books. A shat-a-moron arrived and anchored a safe distance from us.

And then we started watching Fiona. Feeling edgy and irritable. We had arrived September 7th, and it was the 19th and we were getting cabin fever. The comings and goings of the Death, Inc vessels had stopped being impressive weeks before (they do have excellent captains) and the slimy blood coating our hull, our boarding ladder, the dinghy and its painter soured us on them even further. It’s a sign of how much we liked the town that it wasn’t driving us batty as well.

We decided to do a trip by car before Fiona was forecasted to arrive. Of course, the next day we could see we’d be lashed with heavy rain so we wouldn’t enjoy driving and wouldn’t see anything.

We booked a car for the 21st and planned a lighthouse tour of western Nova Scotia.