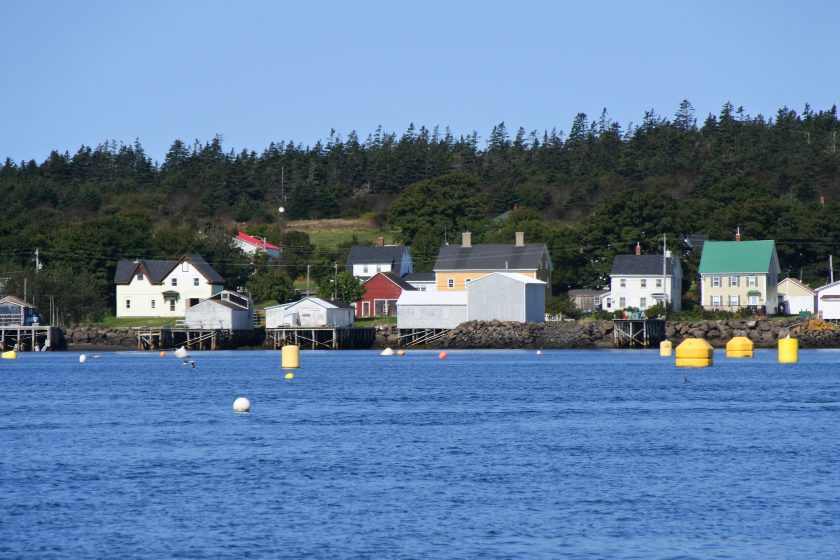 The sail from Freeport to Yarmouth, Nova Scotia, was a git’r done kind of day. We motorsailed with main only for the entire day. The currents in St. Mary’s Bay weren’t as intense as what we had gotten in the Bay of Fundy and the wind was so light that we just wanted to get there.

Before we got out into the open waters of St. Mary’s Bay we had to navigate our way through the channel between Brier Island and Peter Island which is the pinch that has the max-current in the passage. It was intense to say the least. We wanted to get as close to the Grand Passage Tidal Energy System’s barge as we could without getting in the way of that insane ferry course and that maneuver turned out to be nothing short of a feat of brilliant navigation that Dena handled flawlessly. I (James) took some pictures and enjoyed watching her work.

Also seen on the way out, a simple red building that has an interesting history for those of us who read and loved Joshua Slocum’s Sailing Alone Around the World.

We were never out of sight of mainland Nova Scotia once we enter St. Mary’s Bay and the glassy waters and warm day made for an almost hypnotic passage across the bay.

Rounding Cape Fourchu, we lost our current-assist and slowed a bit. The light pictured above is visible for quite some time. James and I have a similar appreciation for lighthouses as products of true civilization, so it was a pleasure to come around it.

The channel up into the harbor made a turn directly into the wind, so we struck the main earlier than usual. Using the handheld tech for chartplotting and the chartplotter for depth was as weird as when we’d done it on Grand Manan and in Grand Passage, but we had the pleasure of another lighthouse along the way.

Bunker Island Lighthouse was an unexpected pleasure, and then we were in the harbor. The big fast ferry was in port and we knew we should pass the moorings in order to find the good anchorage. Unusually, instead of a mooring field, we found only three moorings lined up very near the abrupt ledge for Doctors Island. At high tide, the harbor looks commodious but it’s a trick. Low tide reveals that mud and rocks account for most of the area.

With our modern tools, we were able to see where we were pretty well. I (Dena) did a loop to confirm that the charted depths were accurate and then we set the anchor in the middle of that loop, safely away from the hard stuff. We didn’t figure we’d be in Yarmouth too long, and taking the dead center of the anchorage seemed safer than trying to leave room for an unlikely boat or two that might join us out there.