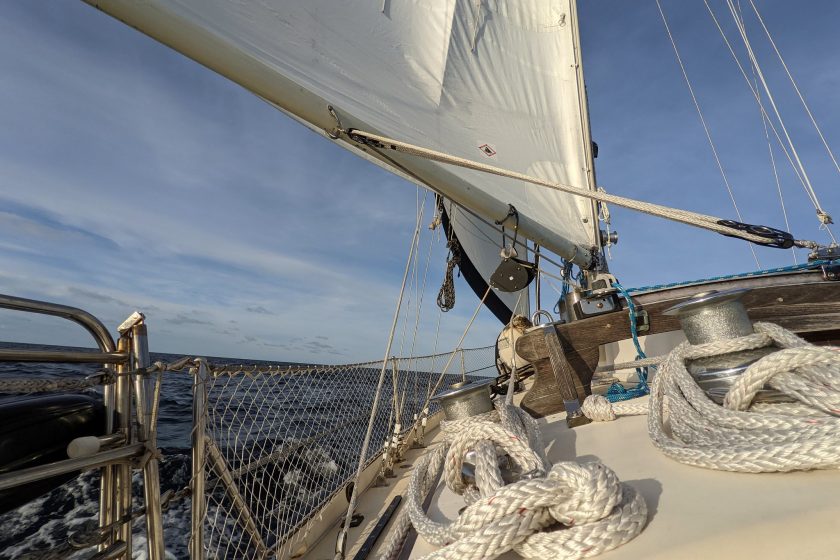 We got up before the sun and made ready in short order. Cetacea had remained ship-shape for our entire Canadian sojourn so making ready was just a matter of weighing anchor. I (Dena) hauled that nasty chain, three weeks sunk into the stinking blood pudding that Yarmouth Harbor calls bottom mud. It took a long time because I kept trying to dislodge the mud by pumping the chain up and down. The anchor left the bottom at 0529.

I (James) had the first watch in the dark without a working local chart on the chartplotter so navigating was a matter of following the former track-line (easy) and dodging the local fishing industry (not so easy). It was, let’s just say, interesting.

With the mainsail up as we exited the Yarmouth River and the sun just rising, the mass of ocean before us was just a little too much for my (still James here) equilibrium to take and I was overwhelmed with sickness as soon as Dena took the helm for her watch. I retched over the side for a few horrible moments and then it was all over for the rest of the trip. Mental note: take the meclazine the evening before, not the morning of.

It was an absolutely splendid sailing experience for the first 29 hours. With the wind just forward of the beam, we played all the sail options. First we had everything out, but I (Dena) pulled the first reef in the main before 10am. That eased the helm for the Monitor, then James rolled in some staysail when it got brisk. He pulled it back out before his hour was up in a 10-knot wind on the beam. In the lulls, the wind shifted forward and we stalled and, in the gusts, we heeled into the boat’s strongest attitude.

On my 1800-2100 watch, the sunset light blasted bright across the sky to windward, fogged pink to leeward. As the light faded, the moon set prematurely into the cloudbank. I sheeted in again and again as the wind eased, bringing it farther forward than before. We were sailing at the perfect angle to the unassuming waves, making for me think about the descriptions of this boat as “seakindly”. Full dark set in about an hour before James took over.

My (James’s) night watches were as long and dark as our partially cloudy moonless nights promised they’d be. That first night was flawless! Like I said before it was dark but the boat was clipping along at her new comfort speed between 5.5 and 6.5 knots all night long. So all I really had to do was watch and fiddle with shit. Like you do.

I (Dena) found Polaris on my 2400-0300 shift and destabilized myself with a new understanding, strong enough to be called a realization, of the Earth’s spin and how it makes it look like the stars move across the sky every night. Those perspective shifts thrill me to the core, and I just happened to be listening to Brian Eno when it happened. Perfect. Jupiter was just out of Orion’s reach and Andromeda was visited by a falling star. It was a great shift.

My 0600-0700 watch saw the sun come up but the wind begin to fail and fall behind, so I cranked the main to full. We trimmed the rig almost non-stop all throughout that first 29 hour stretch getting every last breath of wind we possibly could before 1100 the next morning. When the wind just up-n-died. The seas were sloppy from a-beam so leaving even the mainsail aloft (our standard practice) wasn’t even a thought.

Normally we take a half-hour watch at noon so we can switch it up at night but this time we just kind of blew that off. We left everything ready just in case we got even the slightest puff but nothing ever happened. We ended up motoring for the next 12 hours. Like it does most of the time motoring a sailboat totally sucks the proverbial bag-o-dicks.

At least we had LoveBot 2.1, where the tiller pilot uses the Monitor to drive the boat. We were 65 NM off Cape Cod when the steering went haywire. James took the helm and I (Dena) pulled and pushed every part but couldn’t see what was binding until I gave up and released the Monitor’s water paddle, planning to raise it out of the water if it wasn’t going to do anything but get battered. Instead of floating upward, it took off astern and then dragged roughly at the end of the tether we had tied to it.

Retrieving it revealed that a weld had broken. The damn thing wasn’t steering because it was rotating freely in the piece above. Only its buoyancy kept in place and made the problem impossible for me to see with it deployed. Well. That would have to be fixed.

The other shitty thing about that day was the dying of our watermaker. It had been tripping the breaker on startup, so we lubed the piston with silicone grease (yes, I hear what I just said and yes, you have dirty mind). We were keeping an ear on the tone of the motor and, sure enough, it lagged and then just stopped working altogether. This is bad for us and, yes, needs to be fixed.

My (Dena’s) sunset watch was flat grey that just faded into dark. Some stars were visible, but not many. The moon was hazed out long before it went under the horizon, and we motored on.

I (James again) took the helm with a kind of vigor that I really wasn’t anticipating. I fucking totally got into it. There was a cargo ship 3km off our port bow on a half-mile crossing vector that kept me focused for an hour of so and the stupid ocean-raper-purse-seiner that barked at me for wanting to maintain my course when he was “Fish’n here!” When the poacher and his bright (fucking) lights had finally fallen astern I got the most beautiful dolphin show I’ve ever seen. The porpoise’s bodies were lit up with the millions of green bio-luminescent creatures of the black ocean around Cetacea. I could see them perfectly in the light. It was a pod of about 10 adults and a couple of little ones. One of them whistled at me to starboard and then swam under the boat and whistled again to port then laughed at me in a kind of witchy cackle that had me and Beluga Greyfinger in stitches. Kitty and I were absolutely enthralled by the light show for about an hour. I knew that Dena hadn’t really gotten any sleep up until then so the only witnesses to our dolphin show were kitty and I.

When James gave me that shift kiss just north of Race Point Light, I knew it would be another couple of hours before we were safely anchored and done with the trip. The home stretch felt good, though, because I know this place and had no fear of running aground or missing the best anchorage area. I did have to dodge, startled, some buoys with tall flags on them, but that’s not so bad.

We weren’t the only people looking to sit out the 35-knot winds the Ian-remnants would bring, so I had to circle to find the best, safest, least worrisome spot that also didn’t put us distressingly far from the town dinghy dock. It was so dark that James helped with the spotlight on the bow, and I carefully eyed the combination of anchor lights and radar returns in order to settle the question. Finally, in a good spot, I called out, “Ready, drop it.” James called back, “Anchor’s on the bottom.” We put out all 200 feet, tidied up, and went below to a happy kitty.

We traveled 224.6 NM in 1 day and 20 hours, which is a spanking pace for us. But this is also the end to another incredible down-east chapter for the crew of the S/VS.N. Cetacea.