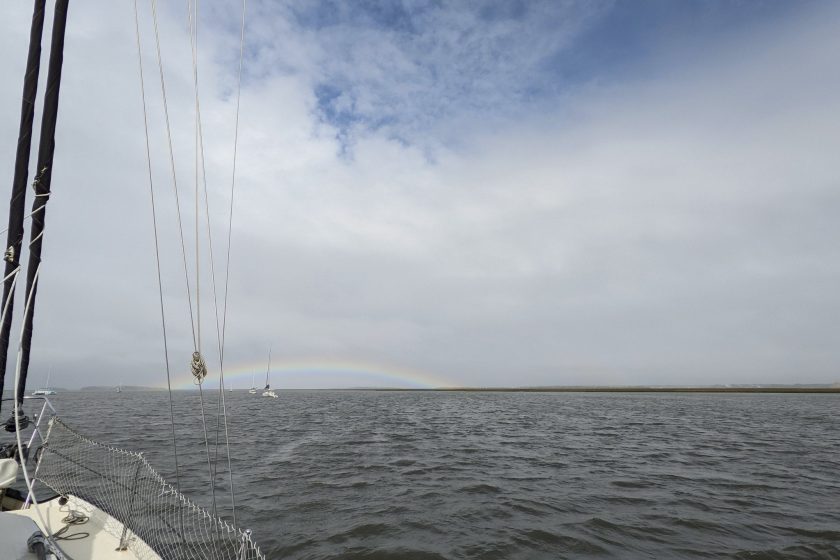 Remember the cracked rib thing a couple of blogs back?

Well as it turned out, a four day offshore adventure a couple of weeks after doing that is taxing…to say the least.

I (James) needed some peaceful anchorage time after the sail from Beaufort to Fernandina Beach. So, even though Fernandina Beach sports the ugliest anchorage we’ve been in on the East Coast of the US, we stayed for five whole days and nights.

It’s not like we sat on our asses and stared-at-shit the whole week, sure there was plenty of that, but we had provisioning to do. We ran the primary propane tank out offshore so refilling that tank was job one, requiring a two-and-a-half mile walk to the propane-getting-place. Then we went grocery shopping and packed an oob back to the marina with a ton of shit…then into the parking lot…then onto the dock…then into the dink…then through a totally packed anchorage back to the boat…on to the boat and into the lockers. A totally normal day, over…Dranks!

Once you’re in the little town of Fernandina Beach it pretty much looks like every small town on the Florida coast. Lots of Pink, yellow and orange stucco, sand, and palm trees, you know the “American Dream”. There was a visiting replica-tallship, the Nao Trinadad, that was really cool to pull up to in the dink but really that was about it.

If you remember from last time we took a four day nor’easter down the coast from North Carolina, so when we showed up in Florida it was on the heels of a pretty chilly cold front. That weather system was the first big winter storm for the eastern seaboard this year and kicked the asses of pretty much everyone north of us. In northern-most Florida, it just made it nice and cool for a few days after we got there.

Once again, Dena was spot on about our offshore passage timing.

After loading up the boat, we prodged and cleaned with the long slow movements of ocean sailors for days. The nights were wet with dew so I cleaned and wiped our Cetacea from stem to stern as the sun rose the last couple of days. This is when I realized I was really on the mend. Not being cold has completely taken the rush out of our Southing. And boy does it feel good.

Our next Windy “promised” offshore weather window of course went to shit so we opted for a few short days of travel down the ICW on the inside.

By the time we’d left Beaufort, NC, we were all three feeling completely done with motoring on the ICW. Not only is the engine a complete drag to listen to, it’s painfully slow about half the time with the currents being against you. We always plan for as much fair current as possible but, with all the inlets from offshore to the inland passage, it’s kind of impossible to plan even a short trip on an all-fair current. But we gave it our best shot.

First day out of Fernandina Beach was a nice fast fair current ride to a beautiful anchorage about thirteen nautical miles down that winding grassy ditch. With hundreds of yards of water to each side most of the way, it’s frustrating to have to watch the depth sounder and chartplotter so carefully. The deep-enough channel is narrow and constantly shoaling along its edges, though, so it’s not the most relaxing travel day. Add that focus to the noise and we do short days when we go inside.

We pulled in to the Nassau Sound Cutoff and buried the hook in about ten feet of clean sand with a hundred feet of scope out with a six foot tide. Oh yeah, we slept like babies that night in that perfectly quiet anchorage off the Timucuan Nature Preserve.

When we woke the next morning, the tide was low and we blinked at the bank of birds standing on sand not far off our starboard beam. It’s one thing to know that shoals exist – it’s another thing to be looking at one from so close.

Raising the anchor (wonderfully clean) was only slightly nervous because of a cross wind and the dying of the ebb current that had kept us oriented away from the shoal. Then we poked our ways through the shallows and back on track.

Rather than a marginal anchorage in the middle of nowhere, we chose to enjoy my (Dena’s) “Small Craft Advisory” forty-seventh birthday in the greater protection of the St John River. Only a couple hours got us to an anchorage across from Blount Island and the “fish camp” was a good spot to leave the dinghy. A movie and a meal for celebrating and then back on the boat…my favorite spot to be!

The weather forecast hinted at and then solidified its (lies?) story about there being a couple of good days for taking the offshore route. We’re going to head out the St John Inlet tomorrow (Sunday) and go about a hundred nautical miles south to the Ponce de Leon Inlet near New Smyrna. If the winds are light and we sail slowly, that’s okay. We have a day and a half to do what will probably take a day. This inlet isn’t maintained for cargo ships, so we really don’t want to head through in the dark. It’s good to have the extra fair wind time.

So hold on to your ribs we’re heading back to the Ocean! Hopefully I (James) won’t need another five days to recuperate from this one!