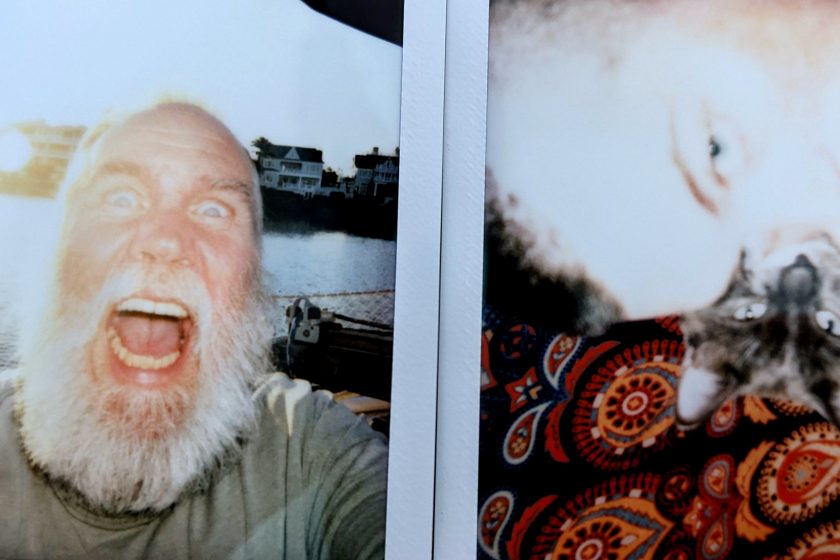 Jupiter was a two week exploration in patience, a concept I (James) am not very good at. Never have been. I get it. I’ve been telling everyone I know that I’m not cold so I’m not in a hurry. But when the only thing standing between us and the Bahamas is a broken bridge and a treacherous bar-crossing I start to feel a little caged in.

Caged I may have been but unmotivated we were not.

We rebuilt the ground system for the wind generator.

We primed and painted the hand rails!

We dove on the bottom.

We added a coat of burgundy to the outer bulwarks and a coat of black to the cap-rails and watched a SpaceX Falcon Heavy launch.

We dove on the bottom again and called the bridge tender by cell phone every single day, but what we didn’t do was go to the Bahamas via that broken-ass’d Donald Ross bridge.

The closest all-weather inlet north of us was Fort Pierce, a 33 mile backtrack to a 45 mile offshore trip south against the Gulf Stream. Fuck that shit! Okay, second best is St Lucie Inlet, only 15 miles north and then south again the same distance before coming even with the anchorage we were becoming overly sensitized to.

I mean, what’s up with the two halogen spotlights aiming from the McMansion down the empty dock to light up our forepeak while we’re trying to sleep?

And the pleasing-to-the-eye stretch of palm and mangrove that was bounded on each end by some kind of villa-revival houses of ridiculous proportion.

The non-stop procession of Stinkleys, Mainshits, and rental jet skis tossing us about in a no-wake zone were less entertaining than the tiki-boats (aka bars on the water) that eased on by while playing non-stop Contractor Rock…turn it up!

What really soured the place for us was that, for two whole weeks, for the first time since entering Florida, we didn’t see a single dolphin. Time to move on.

The best case scenario was going out Jupiter Inlet, a few miles south (meaning in the right direction), but it’s notorious for being impassible in rough seas and shallow even in calms.

We talked to a very cool local dude in a modern Hawaiian style out-rigger canoe who practically begged us not to go out Jupiter Inlet that first day of us considering whether we could make it. He’d been attracted (as so many are) by our hailing port and knew our starting water well. It was fun talking to someone with so much excitement about Port Townsend.

The weather was from the north for most of the two weeks that we were anchored in Jupiter meaning contrary to the Gulf Stream meaning the surf was full on cara-mother-fucking-bunga dude! The surfers were tearing it up just outside Jupiter Inlet but there was no way we were going through that inlet in that kind of nightmare shallow water.

The prudent sailor survives to eat another poke-bowl. And we waited for the forecast to say 1-2 foot waves, got up hella early, and aimed for high tide at Jupiter Inlet.

The 707 Bridge tender gave us a kind heads-up that we wouldn’t be able to pass the Donald Ross Bridge (which we knew because we’d been calling every fucking day) and I (Dena) had the pleasure of explaining that we were taking the flat water out Jupiter Inlet. He didn’t call us dumb, but he didn’t encourage us either.

Once we were outside the breakwaters and the eager fishers had waked us to their satisfaction, we eased on by the shoal areas and saw only a glimpse of 9.6 feet…mostly well over 10 foot depths.

We put all the laundry up and she was glorious. Cetacea heeled to her job and bore down on…2.2 fucking knots?! Welcome to the Gulf Stream, sucka’s! We were close hauled on a fair ocean breeze clipping along going absolutely nowhere…aesthetically! Well almost nowhere.

We were both like (Q) what-the-fuck-else are we going to do today? (A) Nothing, we’re sailing the boat about twelve nautical miles in a fair wind on a foul current. That’s what we’re doing.

We ended up putting 20.6 nautical miles under the keel on what would have been a 16 mile trip if we hadn’t been tacking. Our usual rate of travel would have made that a 4-hour trip but we spent about 6-and-a-half getting from the anchorage we’d left once already (only to turn back…oh, we skipped that part of the story! Arrived on a Friday, tried to leave on a Monday but got the USCG Securite about the broken bridge only about 5 minutes into motoring towards it, turned back and anchored where we’d just come from. Early morning irritation ensued and almost two weeks passed) to the Lake Worth Inlet and a safe anchorage near the Palm Beach Sailing Club where we would…

Enjoy being at home!

After a hectic and expensive laundry-jaunt ashore, we dinghied into the sailing club and retrieved our new and fabulous Fatty Knees 8 from our good friend Benjamin.

She’s an excellent row boat with a complete sailing rig and a two-inch hole all the way through the bow. We never could have afforded one of these otherwise – they’re always either eye-poppingly expensive or sold in two seconds flat. We’ll do the repair work and keep you updated. Tune in for the sprucing up of Tursiops, T/T Cetacea!