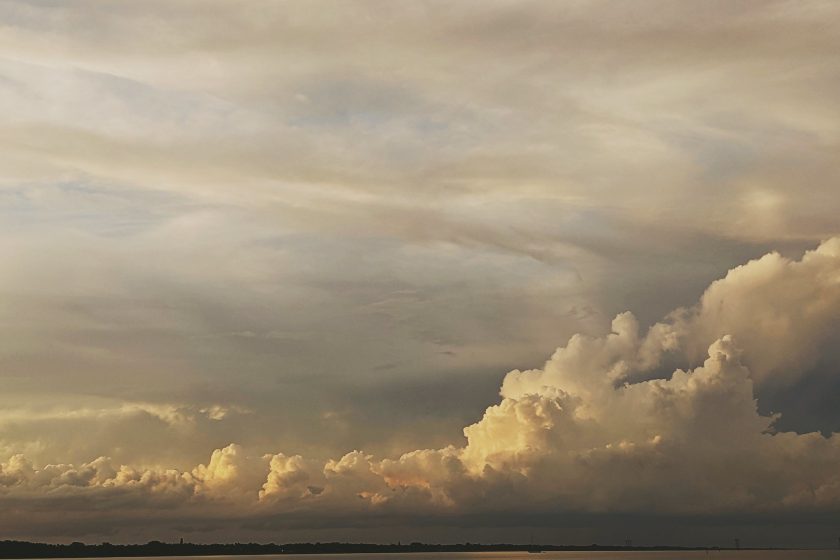 We passed statute mile 1000 this morning just after my (James’s) second watch…just after my first visible-light watch, about two hours after we kedged off the bottom in the southern Indian River…the Indian River not in India,

…the one in Florida.

Okay, let us catch y’all up.

I (Dena) was at the helm, hedging to James about whether or not to spend $20 per day for a mooring with dinghy dock and shower access because I had just realized that this is still their prime season and they…well, they triple-load their moorings. No joke – three boats per mooring is their standard. Compared to that, a three-foot-wide finger pier creates a real privacy gap in a marina. We anchor partly for the distance from other boaters and…

All the way down their (nightmarishly long and soon to be elongated) mooring field, we reiterated that there was no value rafting with a strange boat on a mooring when we could pass their territory, anchor, and then pay the daily fee only when we actually wanted to use the dinghy dock and showers (as I’d read was possible). Having passed at least 150 boats two or three to a mooring, we went hook-down right smack in the middle of the Indian river off Vero Beach, Florida.

It was stunningly picturesque on both sides of the aesthetic spectrum. From the glorious sunsets…

…to the sad realities of expensive dreams.

Within an hour of anchoring, a hunter-green 14′ aluminum Jon boat with a 9.9 Merc ambled on up for a confab. We’ve been approached by plenty of dinghies in our day, most of which don’t hold people of all that much interest but there’s no telling, not knowing, so…I (Dena) engaged.

A meandering ten minutes later, he’d warned me that the harbormaster may tell us we were too close to the moorings and I’d informed him that our radar returns assured us that we weren’t. It was a soft battle between a local guy who’d moved his boat for a storm but wanted to come back and the travelers who knew that we were actually fine where we were. He tried to say that the required distance was in yards…it’s in feet. I said that we were going to stay until it looked like a good weather window was opening up for leaving from Lake Worth for the Bahamas and he just sighed.

We did some painting and some exploring…

Ate some good food and watched the weather. Took the free bus to the shopping area and managed conversations with a Canadian couple and a family of three! Two conversations with a total of five people! Come on, folks, this is really good for us. It helped that the Canadian lady-type had lived for 10 years in Halifax and the family of three included a pubescent girl with real excitement for how they’d dealt with being anchored off Green Turtle Key when the Covid lockdowns came.

The local in the Jon boat did visit again to double-check our plans, but he put his boat north of the others when he realized we couldn’t be intimidated.

I (James) went out to pump the little boat and this dude in a ridiculously outfitted inflatable (25hp motor and enough stainless steel to make a mod jealous) rolls up on me before I got a chance to drown him out by starting the outboard.

In a very short span of time, I knew about his entire meaningless life from submarines to elk hunting to retirement on a dumb powerboat cruising the Florida ICW and the “invention” of “his ICW bridge app”. He was a fucking asshole who saw a man working and thought he’d want his life story. He was wrong…about a lot of things.

We are the people he finds so scary about Seattle that he can never go back again. He mistakenly believed we were his people, but we would have been supporters of the Seattle CHOP from our sub-basement apartment on Boylston between Pike and Pine where we hosted our own pirate radio station. He left Seattle because he was terrified of us and I left Vero Beach because it was time.

Anyway, we weighed anchor and got the actual-fuck out of there minutes later.

The ICW equivalent to a cheap motel is a nice wide curve of depth before the shallows and I (Dena) had read about one. Turns out the water was skinny so we anchored a decent but not long distance off the ICW. No prob.

When we left the next morning, all was well until…

Just after setting the Yankee and hooking her into 5.6 knots I got an alarm…no, not the bilge alarm…this was different. This was ENGINE…overheating! Dena couldn’t hear this one from below-decks so I yelled and ramped down the RPM’s. Of course! The Infernal Cumbustion Engine…again!

“The descension of events”…shut her down, go broad to the wind, desperately look for a safe anchorage…Hey Dean, kind of sounds like a what?

Exactly. Only on the IC (Fucking)W.

Dena looked into the engine compartment and made the correct diagnosis – the alternator belt was gone. This meant that the raw water for cooling the engine wasn’t being sent through the coolant chamber.

Dena took the helm and I went to the bow to deploy the anchor under Yankee alone. Dena luffed up and told me (James) to drop the anchor.

Hook down, no sweat…except that somehow we didn’t have that belt. We tore up compartment after compartment and still couldn’t find that belt. When it shows itself, we’ll be so mad. And so glad.

Internet access has become very important to us over time. Enough so that we’re considering buying in on the Skylink thing. Because there we were, miles from anything visibly helpful…

A search brought up the nearest marina where they did no parts sales and wouldn’t let us land the dinghy in order to taxi to the nearest auto parts store. A public launch ramp was, yep, 3NM away and we acknowledged that yes we would be doing the second farthest dinghy ride of this cruising year in order to buy an absolutely necessary part. Least said, soonest mended.

We enjoyed an artistic sunset.

Dena got up and started shoring up on chain only to discover we were absolutely hard aground, in irons, on the motherfucking bottom. Fuuuuuuuuuck!

I (James) then got up and got to run through all the options of sailing a boat off the shallows in the ICW. Yeah, after a day like yesterday, (you know) I was (fucking) thrilled. I set the Yankee… Fuuuuuuuuck…. I set the staysail… yeah, not enough heeling to bring the keel off the bottom…fuuuuuck I got in the little boat and dragged that CQR to starboard as far as I possibly could while Dena fed me chain and…

Dog be praised, Dena kedged us off without leaving me behind. Actually, I got back aboard (in the dark, mind you) took the helm and totally drove away!

Lots of folks tow their dinghies with the motor screwed onto the transom but we don’t. The transom is built to take pushing, not pulling, forces and the additional weight lends an awkwardness to the way the dinghy tracks behind the boat. It’s just sloppy.

So we quick-anchored right on/nearly-off the channel long enough to load the second of our least favorite motors onto its aft rail mount. Our third anchorage in 24 hours. In the dark. While still buzzing from the excitement of getting off the bottom.

And then we moved on. ICW in the dark, shadowy piling to shadowy piling with a brightly-lighted bridge ahead giving me (Dena, by this point) the general idea of where I need to be over the longer term. A winter’s sunrise even this far south doesn’t happen until after 7am, but after a couple o’dark-thirty shifts, the full moon arced toward the western horizon while the eastern sky showed signs of solar activity. The moon set into suburban opulence and the sun rose over the protected Jupiter Island greenery.

Hook down, safe and sound, just south of Conch Bar. About 200′ off the IC-fucking-W. Ah, fucking Florida.