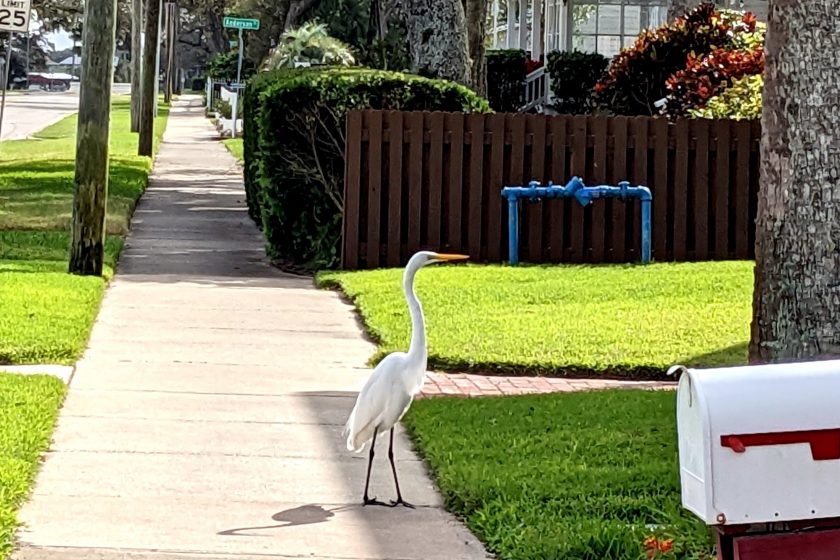 New Smyrna was about as adventurous as its name. The (walk to) laundromat was extraordinarily bad, the food was…ew! The accommodations were what’ev’s, and the anchorage was a complete disaster!

I (James) won’t bore you with most of the specifics from above but I just absolutely have to dis the anchorage.

We fucking hooked a wreck…of course!

…but one just like it (but not visible) that took us a powerful amount of alternate tenacity to weigh off of!

Fuck!!! And yet we prevailed without having to hire a diver. And yet we left.

We’ve seen more wrecked boats down the ICW that I (Dena) dreamed possible, even after what we thought was the dead-boat-fest of North and South Carolina the year we poisoned ourselves with a cracked water tank and petroleum-fouled drinking/cooking/cleaning water. The docks that aren’t in tatters are freshly replaced or have busybusybarges attached to them, bringing them back to level. It’s a clear lesson on how precarious things are here in the hurricane belt.

…And yet there is life. So much mostly un-photographable tenacious life!

The prop-injured dolphin, the pelicans, the manatee, the sharks, the gators, the white ibis, always with the fucking cormorant, the osprey, the ubiquitous egret…

And as we celebrated having gotten free of New Smyrna, the dolphin played around us and I (Dena) got breath-spray on my sunglasses in an unexpected benediction.

We motored on down to the Space Coast and saw what was the first live launch for each of us.

The next day, we raised the anchor again (so many anchor-aweighs this year!) and headed toward the Haulover Canal.

In the canal I (James) saw this with my own eyes, I shit you not, I saw a Pelican jump on the back of a dolphin because he/she had just eaten the pelican’s catch…the dolphin just laughed (okay, cackled) and swam away.

After a less-than-welcoming feeling in Titusville (lot of talk about how people who anchor take advantage), we did an extra hour or so of motoring and got an even clearer view of our second launch.

And then moved on to Cocoa, where we’d be able to supply up again. And also? Yeah, life.