We’d dealt with the crazy dock hand, the rickety piece-of-shit dock, the boat next to us that somehow hit our boat while we were off in the city being very cool, the insurance company and more wake than either of us country mouses have ever even seen and it was time to move on.

We started the engine at 1500, kicked her in gear, and backed out of our slip into the fairway. I was on the bow helping us out when I heard the distinctive sound of Dena  putting the engine in forward but something was different. I didn’t feel the surge of forward motion that usually comes with such a maneuver. We started to drift and Dena kicked up the RPM’s a bit, still nothing. The wind caught the bow and we started to swing back towards the dock and Dena drove hard to lee but we obviously had no helm, adrift in a marina, completely surrounded by millions of dollars in plastic-destroyers.

Oh wait – did we forget to talk about the boat that hit us at the dock?  Funny, right?

We wrote the blog post about being aground at the slip while still in the slip.  Once the water rose enough, we moved to the fuel dock with the idea of changing to a deeper water slip after filling the diesel tank.  Before we had even cleated a line, James became somewhat distracted.

“What the fuck is that?”

I saw the odd area on our port side, midships, but continued to focus on tying the thrusting boat to the heaving fuel barge.  Sounds sexier than it was.

Once we were safe, I could turn my attention to the matter at hand.  The matter was a series of gouges about 4′ long and 3′ high, running from the teak toerail down almost to the waterline.  Cracked paint and gelcoat flaked from the gouges, and naked fiberglass could be seen in a few.  The detective work was brief.  James saw the blue paint and remembered that the boat next to us in the slip was a blue Catalina 22.

I (James) always notice that boat.  It was the first boat that I’d owned, when I was 17 years old.  Actually co-owned, with my best friend.  So whenever I see one, I say the same shit over and over again.  “Look – that was my first boat!”

This became the source of much tension in our little family.  The feeling was reminiscent of the last time I had a bicycle stolen.  A sort of violation of my world.  An impingement of badness on the bits of life I consider good.

I really, really don’t want to spend too much time going on and on about this.  Suffice to say, we got the insurance information from the boat’s owner and placed a claim.  They couldn’t get an estimator out until the next day, but we were stuck in the marina overnight anyway, right?

Except this meant we’d miss the tide change again.  Oh well.  That wasn’t as upsetting as the damage.

The estimator – nice guy named Kyle – came about 1pm the next day.  That dude was out of his element.  He was practically sick at the dock and openly admitted that this was not his specialty.  Motorcycles were his specialty.

He took lots of pictures, but said we’d need to arrange a haul out to get a real estimate.  Great.  Like we know where we’re going to be from day to day?

We told him as much and he insisted that he couldn’t get a good idea of the damage where the boat sat.  Basically, he couldn’t focus his eyes because they were wheeling too hard.

So granted.  It’s a busy dock.  But I find it hard to believe that a company the size of Progressive doesn’t have a boat surveyor in the NY area.  Really?

Anyway, he left and we tried to.

The engine was running great, and it built RPM quite nicely.  But no matter how I revved it up, I got no control.

Boats are steered by water passing over the rudder.  Without some sort of propulsion, there is no steering.  So we spun in the fairway, the wind and current doing different things, until we faced ass-in to the slip that had been next to us only moments before.

We gave in and tied up in the new slip.

No further damage.  Amazing, really.  If the wind had been coming from the east, we would have smashed into any one of a dozen boats worth 50 times as much as ours.  At least in the eyes of the insurance companies.

And so began the diagnostic portion of our day.

We tore the engine compartment open, checked the engine control linkage, followed the lines down to the engine itself, and then, finally, I noticed that the prop shaft was turning when we put the transmission in gear!

I hadn’t thought of that.  As soon as I did, a cold chill passed over me.  We must have spun the prop right off the shaft.

That part of the marina is basically in the Hudson River, which was flowing along at a good clip right then.  If the prop came off, it could be anywhere in the bottom mud up to a quarter mile down river.

I changed into my swim suit and James got the dive mask and fins out.  By the time I was in the water, he had the step ladder set up so I could get back out.  I geared up and went down.

Flipping onto my back, I followed the curve of the hull down toward the aperture for the prop.  The water was not well lighted, but I could see about 1 foot all around me.  When I reached the opening and felt the shaft, I saw and felt the good news at almost the exact same time.

The prop was still on there.

At this point, I really needed a breath, but I had to know what was wrong.  I grabbed the edge and it turned.  Ah-ha!  The prop was spinning freely on the shaft.

Up I went to share the good news with James.  I mean, the bad news.

I mean, the news that is better than the bad news.

We still had a prop!

But what the fuck?

Taking another look, I realized that the shaft key – a small rectangular bronze stick that fits in grooves in both shaft and prop in order to make them turn as one – was simply gone.  It may have corroded until small enough to fall out.  Speculation was futile.  Time to search for a way out of this.

Within an hour – almost 5pm – we had a new friend at S&S Propeller who couldn’t help us but wished he could.  He told us exactly what we needed.  We had a diver coming at 6ish and a comrade from West Marine, Lodi, on his way to the boat with a brand new prop key.

By sundown, master diver Milton Rodriguez had diagnosed the issues and confirmed that the key was key to fixing our problem. 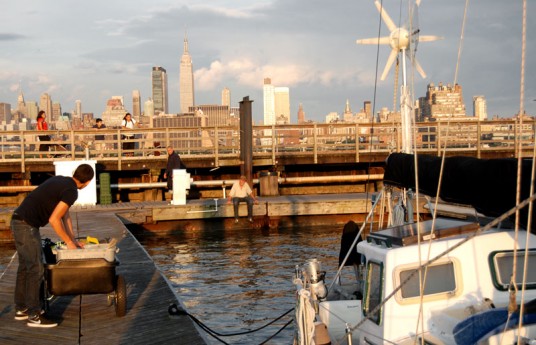 See how far away James is?  The slip was big enough for four of us.

By bedtime, we had that key.

The next morning, we did our coffee ritual and dock-walked with the camera in hand. 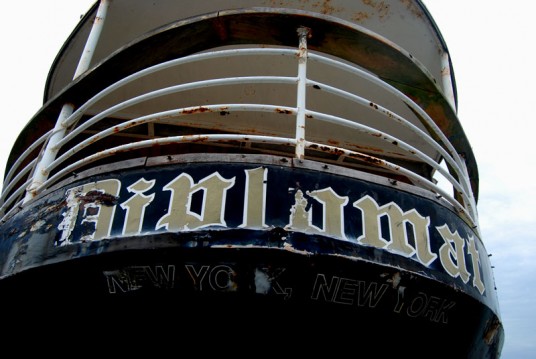 Milton came back and pulled the prop.  He was shaking his head and tisking his tongue at the improper job the last diver had done.  No cotter key in the shaft and no washer to press the bolts into the prop.

This gave us a good picture of what had happened.  The key shrank over time through electrolysis due to conflicting metals – bronze prop and stainless steel shaft.  Hitting reverse without a washer to hold the prop in place allowed the prop to slide back just a touch.  Just enough for the shrunken key to slip right the fuck out.

Unfortunately, the key we got from our buddy at West Marine was about twice as big as the channel it needed to fit in.  Milton had to do some heavy manipulations using vise and grinder and file.  He made it fit the channel first (side to side) and then tried fitting the whole thing in place and marked the depth.  When he came back from the second round, he was visibly pumped.  This was a complicated job that he was doing really, really well.  I love to see a person take pride in their work.

He dove for the 3rd time today and, when he came back up, our prop was installed properly.  He got the cotter pin from his son and put the last touch of safety in place.

And we were ready to leave.  No – for real this time.  Only 60 hours after we’d planned.  Not the worst marine delay in history.

We had 3 hours before the tide was going to turn around, so…we had to go see some scifi.  A couple hours of Ridley Scott’s version of gods and men put us in the right mood to take off – become once again the sovereign nation that we most enjoy being.

Our trip to the anchorage behind Liberty Island was beautifully uneventful and jam-packed with lovely scenes as shown below: 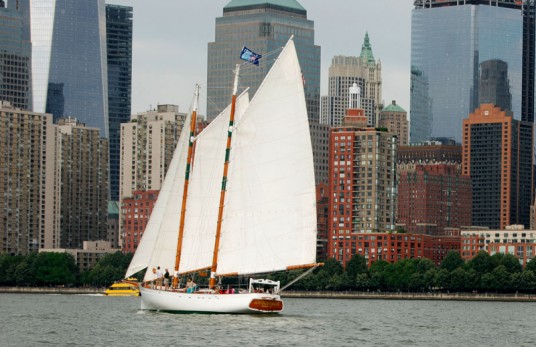 A beautiful gaff-rigged, staysail schooner in front of Manhattan. 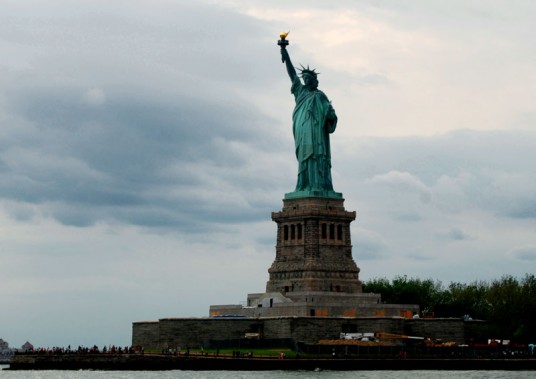 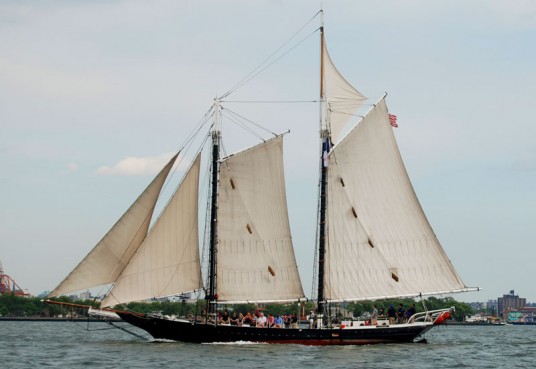 A steel topsail schooner, which we have photographed before…see the trip from Whale Creek. 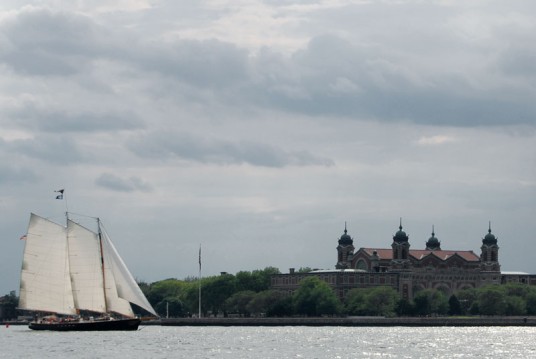 Ellis Island, with a staysail schooner – technology from the same era that populated this country through that island. 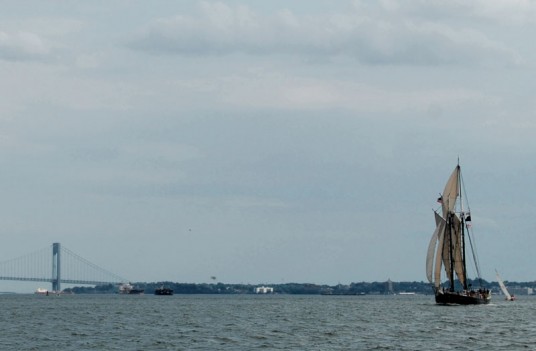 The Verrazano Narrows Bridge with yet another photo of that gorgeous topsail schooner.

Tomorrow, we head for the Long Island Sound.  Not sure what the internet connection will be like, so keep an eye out but don’t be alarmed if our posts become somewhat more rare.