I (James)  finished the engine just outside the Norwalk entrance channel on a heading of 100 East for Port Jefferson, Long Island, NY with two reefs in the main and the jib paid out all the way to 130%. It was one of those sailing experiences that you never read about, meaning, uneventful. The wind was perfect, the seas were with us and we only saw a handful of boats for the entire adventure. It was a prime example of why we live this way. On the VHF radio we heard about a research vessel that had lost its Diver Propulsion Vessel, which was jetting itself all over the Norwalk channel, but that was behind us. There was a NOAA survey vessel, R/V Thomas Jefferson, doing maneuvers and making depth-soundings all the way across the Sound but again no concern of ours, just a minor course adjustment is all.

The most excitement we had was shaking the reefs out when the wind softened and pulling them back in when it stiffened.  Both events were handled, one each, by the one of us on watch, single-handed, without trouble.

Coming through the narrow cut between Mount Misery Point and the Old Field Beach, we slid through the water as though oiled.  The fresh bottom paint does have an effect.  The wind was southern but scheduled to turn west overnight, so we skipped anchoring in the Sand Pit from which a century of Manhattan concrete was taken.  Instead, we turned starboard just before the red nun 4 in order to run up the small channel between Strong’s Neck and the beach.

Even before making the turn, we could see that our Snug Harbor, our Sheltered Cove was speckled with mooring buoys. 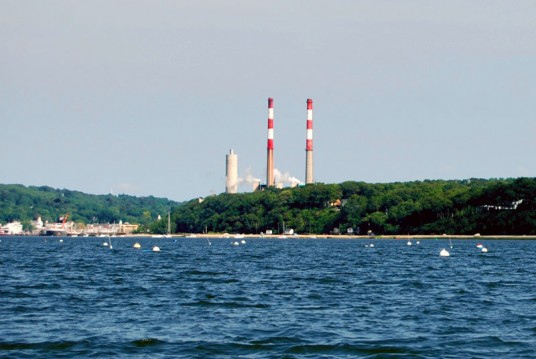 A little background on the humble mooring buoy.

A mooring buoy is a privately owned anchor with a ball attached by stout chain.  The anchor (or mooring) is usually a mushroom style because they tend to bury themselves deeply in sand or mud and are very hard to break loose.  A boat comes up to or alongside the buoy and attaches to a ring at the top of the floating portion (the buoy itself).  This is considered preferable to anchoring because more boats can be fit in a smaller bay (due to the heavy anchor requiring less rode and giving a smaller swinging space).  Mostly, though, people do it because they can’t be bothered to set a proper anchor watch.  Tying to a mooring buoy is easy and secure even in stiff winds with a heavy boat, provided all the pieces are in good shape and inspected regularly.  Of course, you can’t count on that.  In the winter, most mooring balls are pulled up and kept in dry storage.  But in the summer time, the public anchoring fields are littered with them.

The Coast Guard designates certain areas as “Special Anchorages”.  One of the categories is anchorage for recreational boats.  That’s us!  They don’t allow the placing of any pilings (permanent poles driven into the ground), however, they do allow moorings.

Now we have a section of water set aside for recreational boaters.  The marinas and yacht clubs and various other money-grubbing cartels see these areas as revenue-drivers.  They put mooring buoys all over these public anchorages, more closely than I (Dena) consider truly safe, and charge outrageous prices for the privilege of not having to set an anchor.  Those prices range from $2 per foot all the way up to $6 per foot, depending on the popularity of the anchorage.  That’s almost $200 a night for a boat our size, and you don’t even get to plug in for electricity or step right off the boat to use the restroom or showers!

This is robbery.  And it’s in public space.

It’s like the forestry service setting aside a free camping area, and then a for-profit organization coming in, setting up tents on all the camping pads, and charging people by their height to use them.

These tactics are as exclusionary as a yacht club, but they use public space in a way that pushes out the public.

It’s pay or shag a ball, if you can’t find enough swinging room for anchoring.  And picking up moorings without paying doesn’t work in summer, especially weekends, because these capitalists hire enforcers who drive around and collect money from boats on moorings.  They’re officially called “launch operators”, because that’s about the only service they really provide – a ride from the boat into the marina.  Although that’s usually included in the mooring fee, drunken tips are expected (meaning bills with multiple digits).  After all, this is New York.

Back to us, heading into the channel.

We scoped out the situation and realized that there was a gap in the mooring balls right next to the channel.  We would still be some distance from the lee shore and the nearest buoy.  Sneering as we went, we passed up the plethora of empty moorings – because most of the time, the mooring-choked bays are empty or nearly so.  From Monday morning to Thursday night, the moorings are nothing but litter in the water and navigational hazards.

James motored up to the best spot, I started dropping the anchor, chain, and rode as he backed down.  I made the rode fast on the bollard and we made sure that the anchor had a good bite on the bottom by reversing on it.  We went nowhere!  He put the engine in neutral and told me what our depth was.  I multiplied by 5 and let out almost that much rode.  At the very end, I formed a lark’s head cinch with the rope rode around a stainless steel ring and attached the two 12 foot bridle lines I’d created in Norwalk.  This gives us a little slack in the anchor rode and puts the center of effort lower, which is more stable. 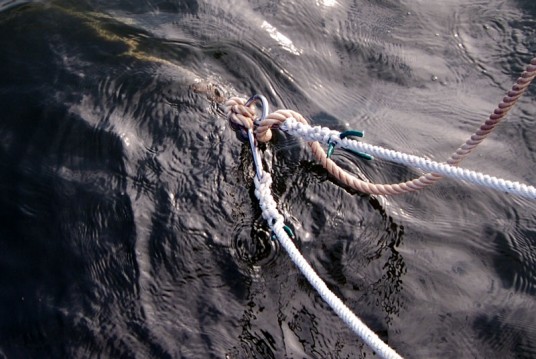 We spent a lovely ten minutes watching our sighted bearings – red nun against a specific hill, green can against a twisted tree – and became confident that we were holding as firm as any mooring buoy.

That’s all it takes, guys.  That and the willingness to keep the boat’s status and position alive in our heads until we pull the anchor and leave.

It’s not hard.  It’s just not as easy as pulling up next to a mooring ball.  I (James) saw so many customers from West Marine that had had terrifying or uncomfortable anchoring experiences simply because they didn’t pay out enough rode.  People drop anchor, pay out five feet of rode, and wonder why they’re drifting off with the tide.  When I told them that an anchor will not hold unless you have at least a 5 to 1 ratio of rode to depth, nine times out of ten, you could see the light go on in their eyes – “Oh, I didn’t know that.”

Anchors are designed to hold with a horizontal pull and release with a vertical pull.  With chain holding the end of the anchor down, the diagonal line created by the rode coming up from the bottom needs to create an angle of 30 degrees or less.  If they weren’t designed like this, you couldn’t pull the anchor loose when it was time to go.  This design makes for strong holding and easy retrieval.  It’s a centuries-old, tried and true method that has been all but forgotten in the Long Island Sound because of this atrocious crime of capitalism.