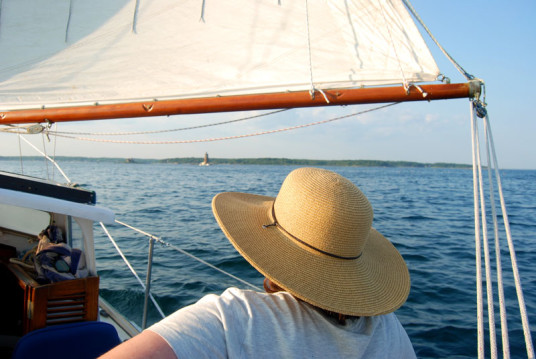 I (Dena) weighed anchor at 0830, grateful for a sandy bottom that left our anchor and rode cleaner than it went in. Nothing like James’ mucky mess from Boston Hah-buh.

We raised sail immediately and broad reached out of Gloucester Harbor and around toward Cape Ann into a beat. 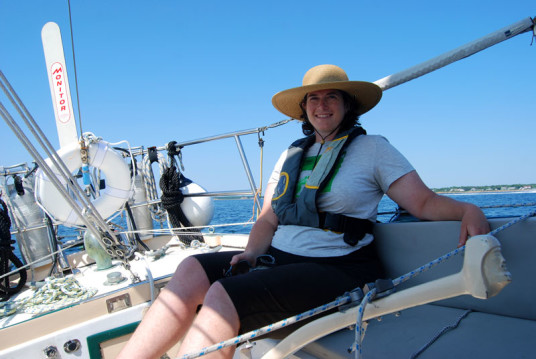 The boat was driving itself and reacting strongly to the Monitor. The sun was nice and cozy, both warm and shady in the cockpit. We traded off camera angles as well as easy one hour shifts, which adds up to many a shift kiss. 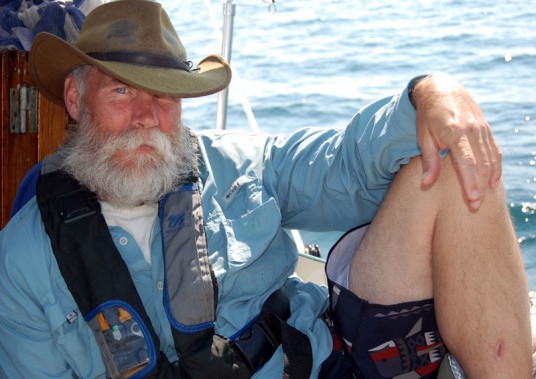 You’d kiss him too. Admit it.

As we came around the Cape, the wind stilled. 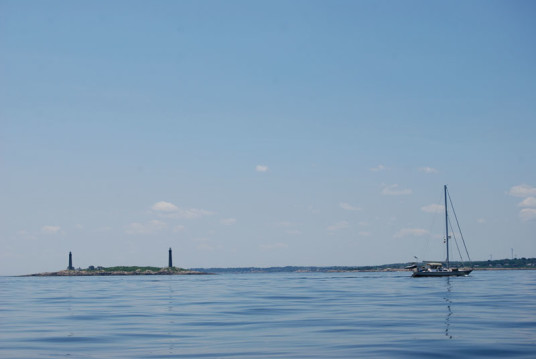 We sucked every last bit of wind and when we went to start the engine…nothing. Not even the irritating click we’d get instead of a roar on occasion. Just nothing.

So, I (James) went dumpster diving. 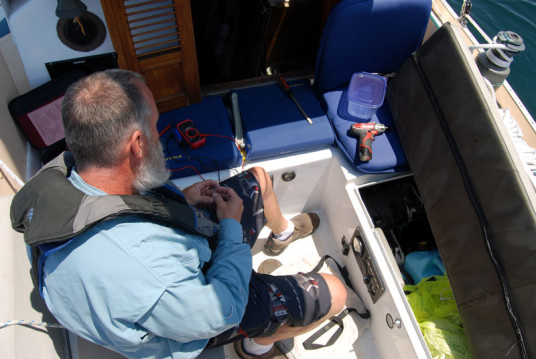 On a boat, dumpster diving is when you have to tear into a well-packed lazarette to trace and test cables to find out why that god-dman engine won’t start.

Is this a good place for a diatribe about the evils of the internal combustion engine? Sure!

Before inventing most of the things that modern sailors consider ancient technology, Nathaniel Herreschoff built diesel engines. That makes our diesel engine the oldest piece of tech on our boat. Even at its best, it’s a jankie piece of shit that’s smelly, greasy, oily, and downright disgusting.

We broke out the screwdriver and started the engine.

We really did have to motor for 4 long, loud hours. The entire time, I was thinking this engine sounds like it’s working too hard. I couldn’t explain it and it didn’t sound bad enough to break open the engine compartment and look inside.

I (Dena) decided there was enough wind to sail. It picked up to about 4 knots relative to our motion, so about 8 knots total. I brought the RPMs down and pulled out the jib and we were sailing! It only lasted an hour, but the silent power of wing on wing sailing is awesome.

Back on with the engine (screwdriver style again), and we approached the Piscataqua River. Our guidebook, the editing job that makes us professional travel writers, said that there was a clear path in and a couple of anchorages in Kittery. 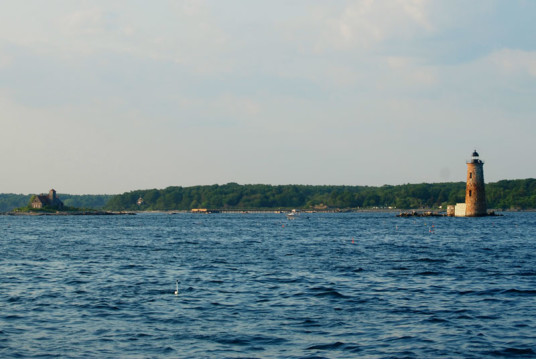 We’d read about the intense currents, so we timed our entry for a flood current. We had 1.3 knots of water motion to add to our motorsailing speed. As we rounded to drop the main and continue under engine alone, we were struck by the glorious lines of the gundalow Piscataqua. 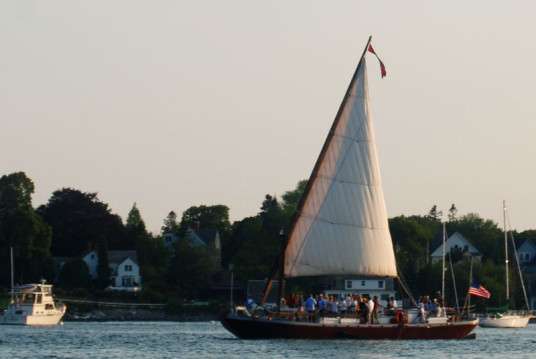 A scow that’s just begging to haul produce up and down the river. Let’s put these freight sailboats back to work!

The southeast wind made the Pepperill Cove anchorage unattractive, so we went up the Back Channel. Basically, the Piscataqua River has islands big enough that there’s a side channel that’s not a separate river. On the way in, we saw a Gulf 32. I (Dena) went into a reverie, thinking about S.V. Sapien, the boat that took us from San Francisco to Hilo, Hawaii. 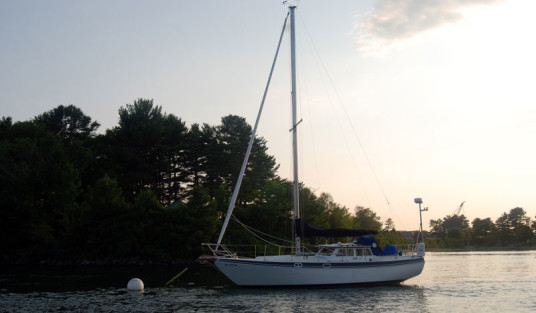 That’s for you, Dean.

We reconnoitered the suggested anchoring area and agreed it was fine. Anchor down, looking like we caught, but some guy is waving his arms and yelling from a dock at a house on shore. I (Dena) waved my VHF at him to signal we could talk if he would call us.

Finally, I just had to know what was so important. 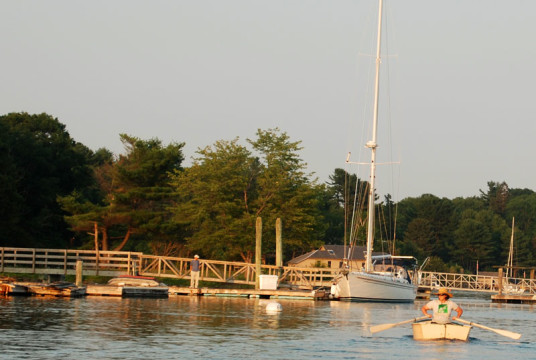 Turns out that the bottom is solid granite and we’d probably just caught some kelp. The reverse tide, which can clock 3-4 knots, would likely have torn us loose. Tom offered us his mooring, and I accepted with alacrity.

After the very fast row back (with the current this time), James and I agreed to move. He went forward and I bumped into gear to take the pressure off the anchor rode. A clattering noise vibrated my feet and I quickly put it back in neutral.

I yelled to James, “Did you just pull some chain?” Sometime the chain passes over the pulpit noisily.

He said yes, so I tried again. The horrible noise came and I put it back in neutral, even more quickly.

I (James) came back to the cockpit, kicked it into gear and heard it for myself, yep, something’s fucked up! I tore into the engine compartment and there it was, the entire wiring harness had been sucked into the drive shaft and spun very tightly between the reverse gear and the packing gland!

All of the sensors, the ignition wiring, the tachometer, and the alternator wiring. Down into the pit of hell.

Precariously anchored, unable to use the engine. Not the best of conditions.

With the current against us and a nice calm evening, we couldn’t sail off the anchor. We had to get the engine working if we wanted to move.

I grabbed a pair of dikes and crawled over the top of the hot engine, plunged my hand into the greasy, slimy, hot pit of our old wiring harness and immediately sliced the end of my finger wide open. Blood welled through the black oily engine muck and my brain shut off.

I (Dena) jumped into the cramped engine compartment, contorting around the block while James staunched the blood flow. Bit by bit, the wiring came loose. Around and around until it was unwieldy, then I cut it off and started over. Finally, it was cleared.

Yet another screwdriver maneuver restarted the engine. James put his new bandaid to the test by grabbing the mooring pennant as I motored slowly.

Finally, we settled back on the mooring and breathed a sigh. We were secure.