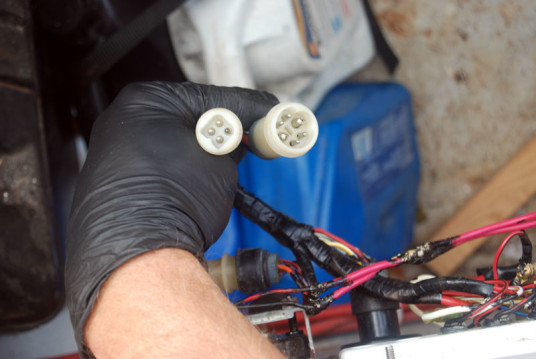 In the last post, we ended in peaceful distress. The next morning, we met Roger, neighbor to Tom, owner of a Bob Perry designed Passport, who offered us his mooring. If this gets confusing, don’t worry. Forgetting names is part of the nature of the peripatetic life.

They both belong to the Portsmouth Yacht Club, though they live in Kittery. The “working man’s yacht club”. If I had a dime for every time I heard someone say they belonged to a working man’s yacht club, I’d have enough money to join the Portsmouth Yacht Club. Don’t get us wrong. These two men were incredible. They offered us every resource they had. But as you know – yacht clubs are not our thing.

Roger owned the house one down from Tom. Some “horrible people” lived between them. Roger, who has a 43′ Irwin, is a do-it-yourselfer to the soul. He immediately offered to take us to West Marine for the electrical bits and pieces we’d need. Of course, the liquor store was on the way…

Anyway, the picture above shows what a clean break we had. There are two electrical harnesses – one on the engine and one on the instrument panel. They’re connected by an extension harness. Turns out, that’s what got pulled into our prop shaft as we motored merrily along until the hard plastic ends started to knock against the sides of the hull.

No real damage, in the end.

Except that the extension costs about $175 before tax and shipping, best case scenario, if the internet discount people had it in stock. Much more if we went to a regular Yanmar dealer.

So, we’ll build it ourselves.

As a matter of fact, now that we look at the ends on the engine and the instrument panel, we aren’t that impressed by the former owner’s work. Yet again. 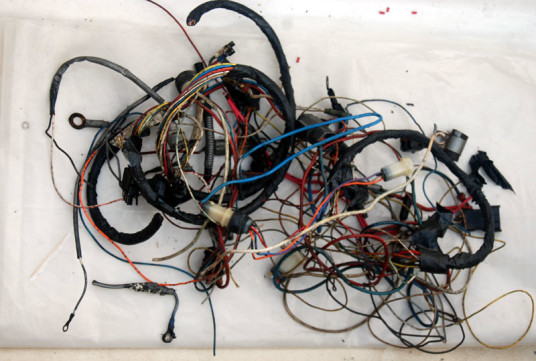 It was the one last thing on this vessel that was the infamous black box. We hadn’t looked into it, we hadn’t rewired it, we knew it didn’t work quite right, but ignored it.

First rule – if it can go wrong, it ultimately will. And this was the ultimate time for that wiring harness.

Spending $1100 on a new instrument panel and wiring harness was not an option. There isn’t anything those fuckers can come up with that can outsmart us. Therefore, we’ll have to build it ourselves.

We started with the instrument panel that is in the cockpit. We decided early on that we wanted to make it as easy as possible, so we clipped off only the ends that were connected to the ends of the wiring harness.  You with me?

We sorted them, separated them, and put them all on a terminal block. Because that’s what you do with 12 volt electricity. You make a terminal block that starts at the shortest wire and ends at the longest wire. This isn’t rocket science – this is just getting rid of the monkey-fuck shit. 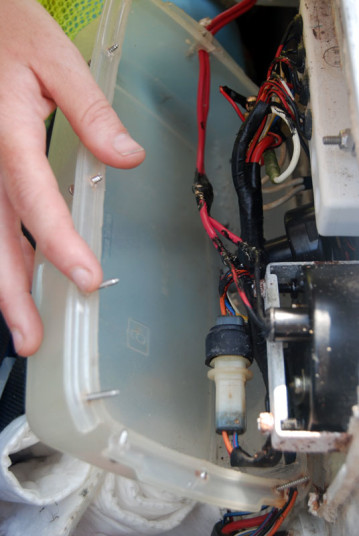 You may not have seen that, but in the pic above and the first photo of this post, there are a lot of wires that mysteriously merge and separate, come and go, ebb and flow.  This isn’t because the designer is some mad genius we can’t understand. This is because he fucked it together as he went along. You should really go back up and look at that photo. Nothing is heat-shrink sealed, marinized, or even wired properly for home use. This thing looked like it was pounded together with a hammer.

And this is our boat.

On the other hand, a former owner decided not to throw away a used tupperware container. They used it as the waterproof back for the instrument panel.

That’s brilliant. That’s part of what made us fall in love with the boat in the beginning.

We just wish they could have followed through with building the cables and harness correctly. Meaning even if not ABYC, at least intelligently.

Rather than that, we made this. 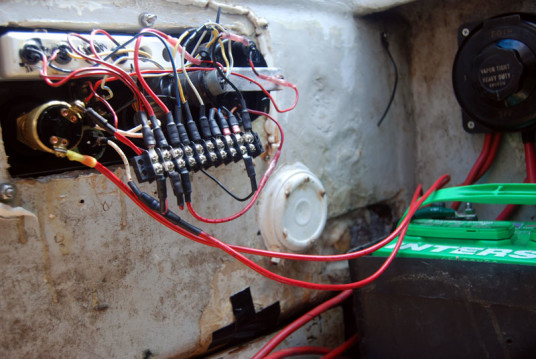 Simple, right? All the positives come together with something called a jumper, all the negatives come together, and the rest are separated. Then, what used to be an extension harness that was so juggled together and taped and glued and splattered with unidentified black goo has been cut right out of the system. Thanks to it very efficiently falling into the prop shaft. 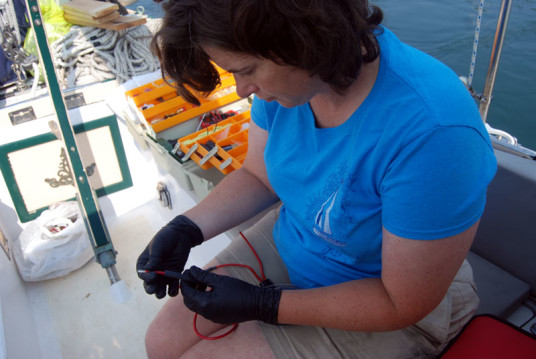 We built each cable, ring terminal, shrink wrap, and all, and connected the instrument terminal block to another terminal block in the engine compartment. 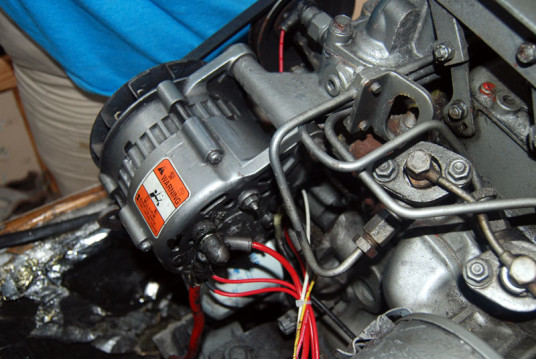 In the end, we had neatly bundled, cleanly wired electricity running to every sensor, the alternator, the starter, and the ground on the engine side as well as each part of the instrument panel.

And sure enough, the whole thing worked.

Partway through our day, we took a break to get some food and talk to local marina owners. Because that’s our job. Remember? We’re actually employed (contracted) to do this shit. 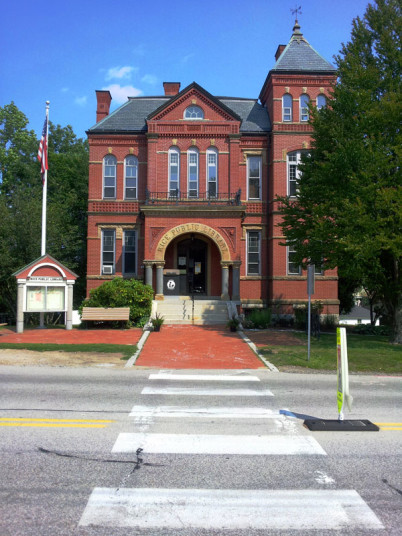 We found out that Kittery Foreside has a gorgeous old library. Gotta love a good library.

Then we made it to Kittery Point Marina, where they offered us a couple of loaner bikes. 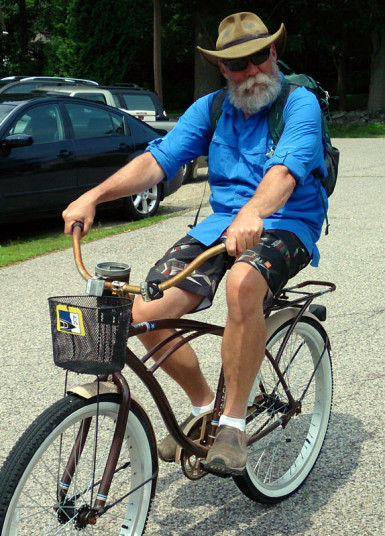 As cool as I may appear to be, beware of piece ‘a shit loaner bikes. These bikes had not been well cared for, in direct opposition with the bikes we’ve cared for over the last 18 years of our lives.

Near the top of the first hill, when the pressure was on…

The chain came off. 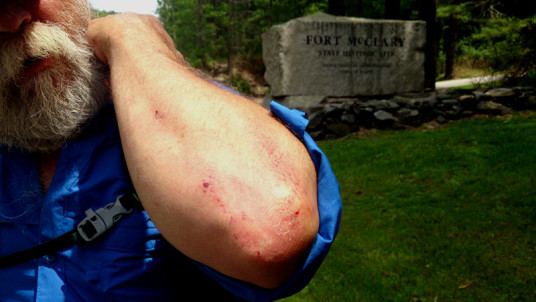 Not broken, just deeply bruised. But make no mistake about it, my ass was thrown thoroughly over teakettle. And that ass is 51 years old.

“I did not break my arm today.” I (Dena) heard that many a time since this occurrence.